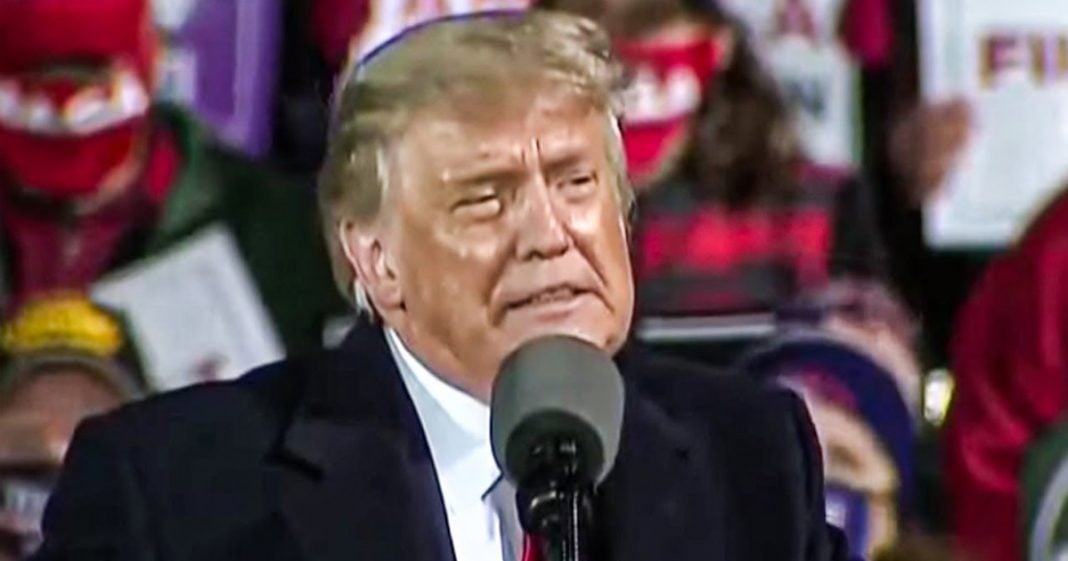 Well, it happened. The day after Trump’s disastrous debate with Biden where he refused to denounce the hate groups that support him, he is now claiming that he’s never heard of them. He doesn’t know them. This is what the President has always done anytime someone close to him has gotten in trouble – he tries to distance himself from them rather than denouncing them. Ring of Fire’s Farron Cousins discusses this.

Donald Trump is still dealing with the fallout from is a pitiful debate performance Tuesday evening, where he refused to properly denounce a white supremacist group, specifically the proud boys. Um, so he spent most of yesterday trying to convince everybody as well as by the way, every Republican elected official, who spoke to the press yesterday and every Republican talking head who spoke yesterday, made it clear that no, no, no, no, no, no. Trust us. The president totally did denounce the proud boys and white supremacists. Everybody agrees. Those are bad groups. And the president totally said that, which is why we’re all having to come out and explain that he did say it, eat it, say it. Um, they’re all lying. They’re all liars. And so the president is still dealing with that and it’s going to hurt him tremendously. But yesterday after actually trying to say that I did, I did, I did. He finally came out. He was walking, Oh, he was heading off to a fundraiser in Minnesota.

And this is what he said. Reporter asks him, you know, about the whole thing. And he said, I don’t know who the proud boys are. You’ll have to give me a definition. I can only say they have to stand down the law enforcement do their work. I’ve always denounced any form, any form of any of that, you have to denounce. But Joe Biden needs to say something about Antifa. I know Antifa is a real problem. Biden refuses to talk about it. So he didn’t know who the proud boys are like, who are these people you’re talking about? I didn’t even know. I don’t know what Chris Wallace said. I thought he was just talking about, you know, proud to be a boy, right? Yeah. Male pride. It was that, is that not? Oh goodness gracious me. Huh? Well, I had no idea. Oh, hoops, but Biden man.

Antifa who? Gosh, darn it. Get those fellows, right? No, he knows who the proud boys are. He does. He’s been briefed on them. He’s retweeted them, them. He has basically encourage them every step of the way. And here’s the difference between the proud boys and Antifa and Joe Biden by the way, is not an antifascist supporter truly, truly is not. He’s made that clear. And nobody’s buying Trump’s claim that Joe Biden is Antifa. Other than Trump’s, you know, cult-like supporters who would believe it. If they said Joe Biden was a space alien. Um, but with the average, you know, suburban housewife that Trump’s trying to scare to death, they don’t think Joe Biden’s right. Antifa proud boys. In contrast to Antifa, they are an actual group. They’re actually well-organized. They did at one point, have a leader. Gavin McInnes, the founder, who I think about two years ago actually left the group, but they still have kind of semblance of organization to them. Now I’m not saying they have a headquarters that they have weekly meetings or shareholder meetings or anything like that. No, that’s ridiculous. Antifa on the other hand, Biden was right about that. It is, it’s kind of a concept. And just so everybody remembers Antifa means Antifa fascist.

So if you’re not anti-fascist you’re probably fascist, like being anti-fascist is a good thing. That’s a thing we should all be in this country. Let’s all not embrace fascism. Maybe we could try that. I don’t know. But Trump is trying to paint Joe Biden as the one who’s backtracking as the one who’s wishy washy. He tweeted out this morning, Joe Biden, wouldn’t say law and order in the debate. There it goes. Suburbs. What does that even mean? Cause he wouldn’t say the words, law and order. You wouldn’t say the words white supremacy is bad. And now you’re saying the words, I don’t know who white supremacists are. Even though I’ve been very friendly with them for four straight years, I had never heard of them. I thought they were somebody else. Uh, this is what Trump has done by the way, every time anybody close to him has gotten in trouble.

He’s always been like, well I never, I never talked to that person. That was a coffee boy. Right? Proud boys. I thought you said coffee, bullies. No, you know who they are, you know what they’re about? You know what they’re doing? Cause Homeland security has been keeping an eye on them and your own FBI and Homeland security, um, have said they’re a huge, massive threat. In fact, uh, Ken Klippenstein, uh, with the nation, put out a phenomenal new report yesterday about all of that with internal documents. So yeah, the government knows who the proud bores are and what they’re all about. And there is no way Trump’s going to escape by trying to say, oops, never heard of those guys.