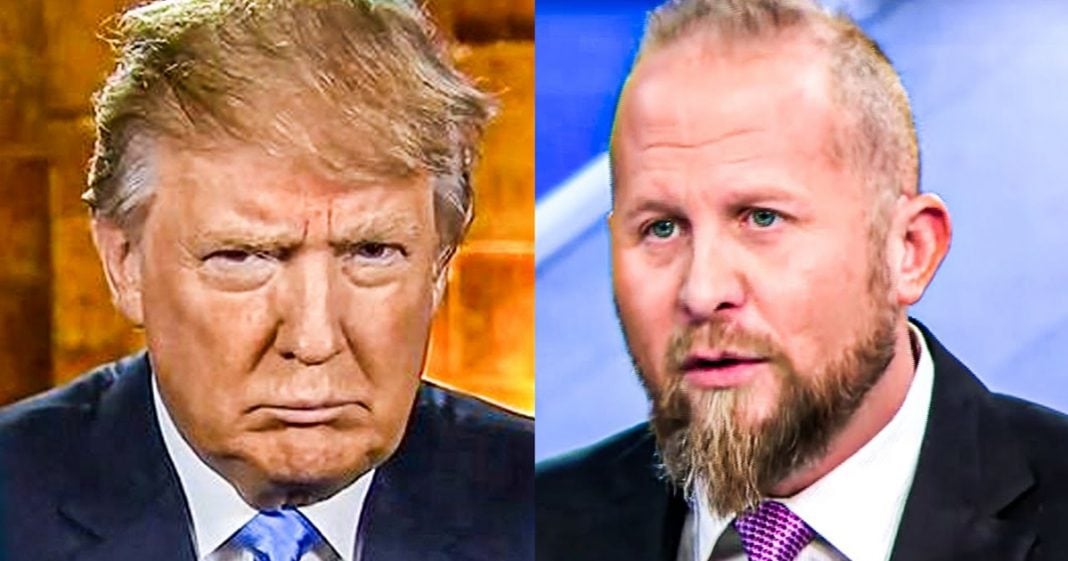 According to reports, Trump World is currently in a state of panic over former campaign manager Brad Parscale, and there is reportedly a concern that he is going to start talking to the authorities. Parscale has found himself the target of a major investigation over the potential theft of tens of millions from the campaign, and if anyone else was involved, they need to be worried about Parscale possibly working out a plea deal. Ring of Fire’s Farron Cousins discusses this.

Yesterday, Brad Parscale Donald Trump’s former campaign manager who was demoted earlier this summer, uh, officially stepped down in any capacity from the Trump reelection campaign. Now, uh, again, as many people remember in the summer, beginning of summer ish Parscale was demoted, uh, more on the digital side, which was his forte in 2016, uh, because the campaign was in total disarray and Parscale was horrible at his job. And there was also lots of questions about why the Trump campaign was spending about $170 million with companies that Parscale himself owned. That was a little questionable. Uh, but that wasn’t a reason he got demoted. That’s just something everybody needs to remember for this next part, because Parscale, as we all know, is under investigation. According to reports for possibly stealing up to $40 million from both the Trump reelection campaign and the Republican national committee. Now, according to campaign spokespeople for the Trump campaign, there is no investigation.

There’s no audit, none of that’s happening. Please go away. Don’t ask us any more questions. But according to vanity, Fair’s Gabriel Sherman, who has been one of the most accurate people reporting on the Trump administration for these past four years. And he has very well placed sources inside the Trump administration. He says that the feeling inside of Trump world, according to his source that is inside, uh, is one of pure terror because they’re apparently afraid that Brad Parscale is going to cooperate with law enforcement officials and therefore turn on them. Now, why would that scare them? Right? I mean, if somebody came up to me and threatened to say, I’m going to go, I’m going to go cooperate with law enforcement officials against you. Okay. Well, why I haven’t, I haven’t done anything. So I wouldn’t be worried about that. Now, if I did have some kind of criminal thing that I had been doing, and it was a secret, nobody knew about it.

And somebody said, Oh, well, I’m going to go talk to the cops. Yeah. That would probably freak me out. You see where I’m going with this? The Trump world wouldn’t be freaked out about Brad. Parscale cooperating with law enforcement officials. If there wasn’t something he could turn them on, right? Again, this is from a source from Gabriel Gray mural. Sherman has not yet been verified that this is how they feel. But as I pointed out, Sherman has been one of the most accurate due to his sources inside the administration has been one of the most accurate people reporting on what’s actually happening and happening inside of Trump world. And here’s the quote. It says the family is worried. Brad will start talking. That’s what the source told Gabriel Sherman. So yesterday, just yesterday, when I talked about this, I talked about Parscale being under investigation for potentially stealing 40 million.

I actually shot down the idea that the Trump family was in on it. Um, you know, cause that’s kind of small potatoes. If in fact he is worth as much as he says, he’s worth. I said, I think Parscale was acting alone. This is something Parscale always wanted. He always wanted to be rich. He always wanted to live that lavish life style. But now I mean 24 hours later and I’m having to say, Oh, crap was already wrong. Have you already proven me wrong by being more criminal than I gave you credit for it? Because that’s what it is like I was actually trying. It’d be nice to them. I was trying to go easy on them and say, listen, yeah, you’re crooked. But maybe you’re not that crooked. But according to this report, Nope, there is no low to low for the Trump family to stoop to. And again, these reports have not yet been substantiated, but if it’s anything like Sherman’s past reporting on the Trump administration, we have very little reason to doubt that it’s accurate.