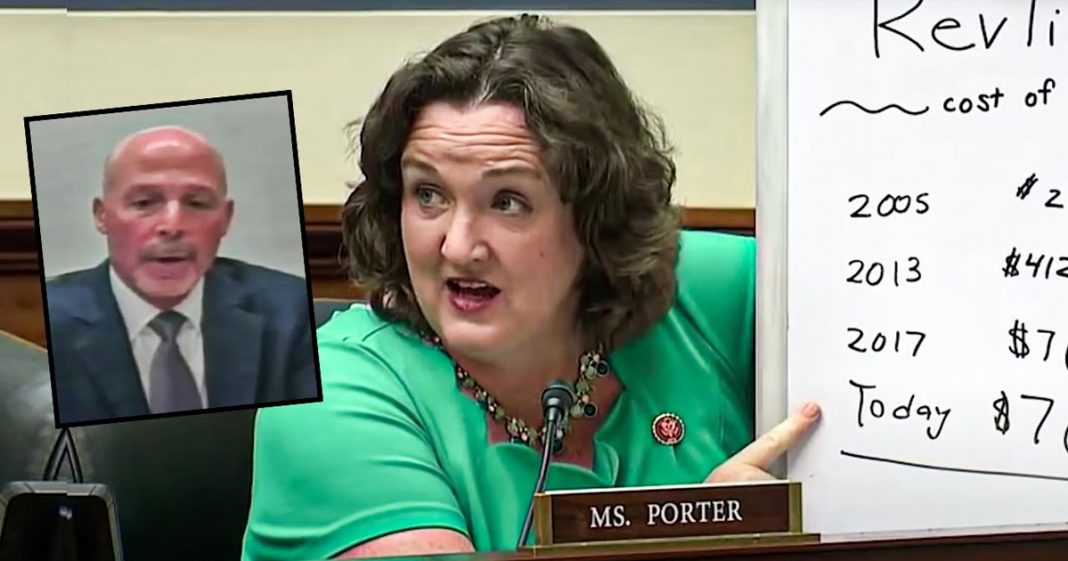 Representative Katie Porter gave one of the best arguments for price controls on pharmaceuticals that we’ve seen in a long time this week when she completely eviscerated a drug company CEO over the price of just one of their drugs. Porter tied the argument to the bonus received by the CEO, and even had a white board where she showed very clearly and concisely why the arguments for the big bonuses and price hikes were absolutely ridiculous. Ring of Fire’s Farron Cousins discusses this.

Yesterday in the house of representatives, there was a hearing, uh, with current and former pharmaceutical executives about the exorbitant cost of medications here in the United States and representative Katie Porter gave a, I don’t know if you’d call it questioning or if you call it testimony, or if you just call it a flat out lesson in what happens to the price of these drugs and how it correlates to the bonuses received by the CEO’s, uh, Porter representative Porter was talking to former, uh, Selgin CEO, Mark owls. And this is what happened during that exchange. This was absolutely beautiful. Take a look.

Katie Porter:                        You’ll, in some way, this was your compensation in 2017 for being CEO of Celgene. And that’s a lot of money. It’s 200 times the average American’s income and 360 times what the average senior gets on social security. Now of that 13 million, about 2.1 million came from your company hitting yearly earning targets, and more than half of the bonus formula was based on those targets. Any increase in the price of Revlimid would also increase your bonus by increasing earnings. Isn’t that right, Mr. Alles?

I love this point that she is bringing up because we have seen members of the squad. In fact, yesterday, uh, members of the squad, uh, AOC to leap Presley all would after CEO’s as well. And they’ve done it the past. They’ve talked about, you know, the R and D costs, but this, what, what, what representative Porter did here was slightly different. And another good point to bring up to kind of, you know, round out the bigger picture. And that is the pay, the pay that the, the CEOs are taking in because it’s not just the profits of the company itself. It’s not just the constant markups of drugs that the R and D was paid off for 20 years ago. Because by the way, it takes fewer than two years for a drug company to recoup the entire cost of research and development for a drug.

After that, it’s all profits and marketing and let’s not forget, they didn’t even pay for most of the R and D. So technically that’s all profit. They get back to cause that’s the government paid for it. They just get to keep it. And they count it as we recouping the cost. But the CEOs, these are the people that call the shots, the people that have control over all of this, they could change it. They could stop it. They’re choosing not to because it puts more money in their pockets. And as long as that system is in place, it is going to continue to be this way. We either have to put price controls on the cost of drugs, or we have to put pay limits on what a CEO can make on what their yearly salary salary can be, what their bonuses can be. All of that. And it is a bit ridiculous too, that their bonuses, as she pointed out, it’s not to the fact that, Oh, did the drug do better? Did it cure more people that it worked faster that have fewer side effects? Now you jacked up the price on it because we wanted to put more money in your pocket. That is exactly what happened, not just with that pharmaceutical company and not just with that CEO, but across the board in America.