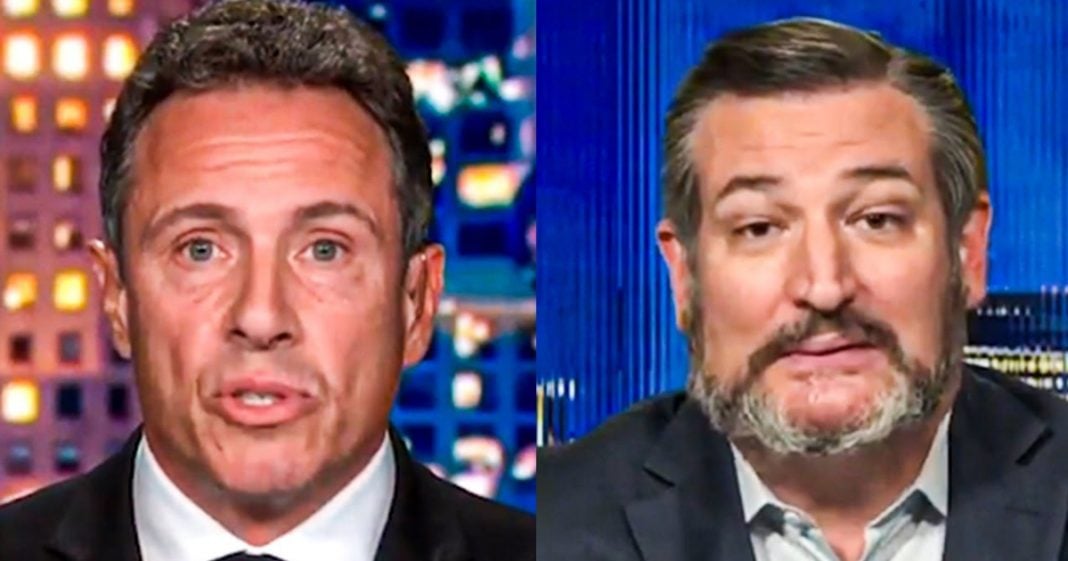 Republican Senator Ted Cruz thinks he’s smarter than everyone else – his smug face gives that much away. But CNN’s Chris Cuomo wasn’t about to let Cruz get away with misdirection and deception during an interview this week, and he called Cruz out for his, as Cuomo put it, “weak ass argument.” Ring of Fire’s Farron Cousins explains what happened.

Yesterday, Republican Senator, Ted Cruz decided to appear on CNN opposite. Chris Cuomo, uh, to talk about many things. One of the things obviously was Donald Trump’s debate performance. And you know, Chris Cuomo, like every other American in this country wanted to ask a Republican, why couldn’t your guy just say, white supremacists are bad? Why couldn’t he disavow them? And then Ted Cruz did a Ted Cruz thing with his smug, very punchable face. And Chris Cuomo wouldn’t have in any of that yesterday. Like again, like the rest of America, he’s tired of it. He’s sick of it. And so this is just one of many altercations that happened during Ted Cruz’s segment with Chris Cuomo, take a look.

Chris Cuomo:                       I know you’re a master debater and professor Dershowitz tells me where the star, smartest student he ever had at Harvard law. You’re going to go with that weak ass argument here? Bird who had a complete enlightenment about how hate was wrong, who changed his life? Who spoke about it?

I can’t tell you how exciting it is to finally see somebody on national television, you know, real cable news, calling out a Republican for as Cuomo, put it, having a weak ass argument. I love that. I love that. I love that. He said it. I love that he left the word ass in there because it’s about time that somebody in the corporate media called out the Republicans who were always trying to say, well, the Democrats y’all knew a racist, like 80 years ago, you know, the KKK 150 years ago was started by a Democrat things. Things have changed. Actually. I don’t know if Republicans know this. I know they haven’t wanted things to change in the last 150 years, but they have the democratic party today.

Doesn’t stand for what the democratic party 150 years ago did. Neither does the Republican party. There have been realignments. There have been shifts. So yeah, the Democrats have found that it, but those Democrats then would be considered Republicans now. And it’s a weak ass argument to argue anything else and ask for bird. As Cuomo pointed out, bird repented, bird tried to make amends bird admitted. He was wrong. It isn’t that what we all want to see happen with people. We want to see the growth. We want to see them say, Oh wow, I was wrong on this issue. How can I make it better? Now, let me devote time to it. Which is what happened in that particular instance. But they don’t.

I want to see that they don’t want to see it because it runs counter to their narrative and their narrative is that we can’t possibly be racist because we’re the party of Lincoln. Yeah. Lincoln, wouldn’t touch you with a 10 foot pole, Ted Cruz. And of course, as I mentioned, there were several other blowups, uh, in that interview with Cuomo and Ted Cruz. In fact, the one we just showed was actually one of the Tamer ones, but I chose to focus on that one because that’s the one that has real substance to it. Uh, Cuomo did also point out that, you know, Cruz is defending the guy who called his wife ugly, humorous, but there’s no substance to that, which is why, you know, I want to focus on that particular argument. Cause this is an argument that Cruz tried to make there by bringing up the Robert Bird thing. It is similar to all of the other arguments we see from other Republicans trying to make saying that, no, no, no, no, no. Democrats are actually the racist ones. Democrats are the ones who, you know, Oh, you eulogized Robert Bird. Oh, you founded the KKK more than a century ago. Y’all are the racists. We freed the slaves.

No. Okay. Lincoln and his cabinet and his administration and the winning over war freed the slaves that has nothing in common with any of today’s modern Republicans. You certainly wouldn’t fight over that. You wouldn’t go to the battlefield for that. Unless we told you the slaves were covered in oil, then maybe you’d fight because you’d want them. But you are nothing like that. Democrats are nothing like the Democrats were back. Then things change as much as Republicans don’t want them to. Things still change. And we’re not the same parties anymore. And thank God for that.