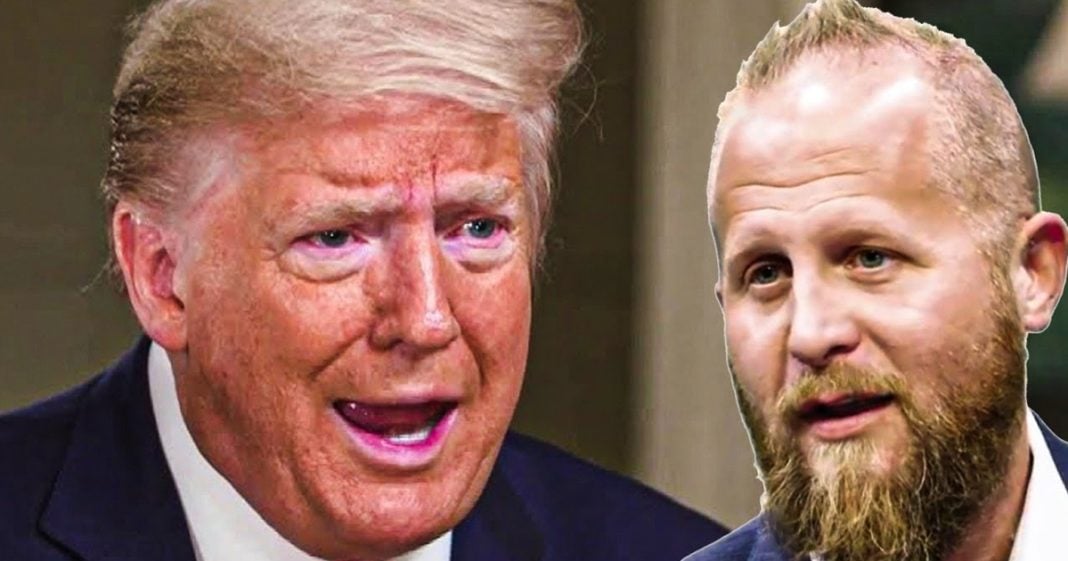 Donald Trump’s reelection campaign is starting to pull ads in even more states with just a few weeks left before the election. They have been outraised the past few months by Joe Biden’s campaign, and now they are running out of cash. And according to new reports, tens of millions of dollars might have actually been siphoned off by former campaign manager Brad Parscale. Ring of Fire’s Farron Cousins explains what’s happening.

Donald Trump’s reelection campaign is very quickly running out of money. Not only are they getting outraised and outspent by Joe Biden, but there’ve been some internal problems recently that have a well cost. The campaign had least tens of millions, possibly upwards of $200 million. This week. It was announced that the Trump reelection campaign was pulling scheduled ad runs out of both Ohio, a massive swing state and Iowa, which is pretty much a red state, either way they’re, they’re scaling back their ads. You know, it was just two, three weeks ago. They said, well, we’re going to have to pull our ads out of Arizona, which has now become a swing state. Trump could end up losing Arizona, and now they’re pulling more ads in more States and we’re a few weeks away from the election and Trump is losing pretty bad. And so they say, well, cut our losses.

We don’t have the money. We can’t do this anymore. So the big question is where’s the money going? What to get the answer to that? We probably need to ask Brad Parscale cause according to reports, Brad Parscale is now officially under investigation for stealing as much as $40 million from the Trump reelection campaign. Uh, we do not know yet, obviously it’s just under investigation. It is suspected or they have reason to believe this might have happened. So they’re investigating to find out if it did or did not. Uh, but as we all know, Brad Parscale suffered a very public, uh, mental health emergency. This past weekend here in the state of Florida was placed under a 72 hour, uh, involuntary psychiatric hold known as, uh, he was Baker acted. Uh, Baker act is what allows people to do that here in Florida. That’s how, that’s what we say he was Baker acted.

Um, but it’s as more details emerge about the story. And I actually said this at the time and it’s, it’s starting to look like I’m right about this. This is less a mental health problem with Parscale and more of a Shawshank redemption warden Norton problem. Remember cops showed up, uh, the in Shawshank and he realized they knew what he had done. And anyway, I think that is more of what happened. Parscale knew that the walls were closing in and he had a psychotic breakdown. Now that’s not to say that this isn’t a genuine mental health issue. It, it genuinely is, but that was likely the trigger of it. According to his wife or at least reports, he may have abused her, the neighbor whose house she ran to when she said, I think my husband just killed himself, noticed bruising on her arm.

So the man had breakdown. That is for sure, but it likely stemmed from the fact that he saw the walls closing in and didn’t see another way out. He didn’t want to go to prison. And according to the reports, you know, he may have taken this money to support his lavish lifestyle. We have reported on that for about a year or so. Brad, Parscale paying himself so much money from the campaign driving around in Ferrari’s as a campaign manager. That’s not a thing that happens. That’s just not, but he wanted to live that lifestyle just like Michael Cohen. That’s what ended up taking Michael Cohen down Trump’s lawyer and fixer. He wanted to live the lifestyle. You see Trump doing it and you think, God, I get a piece of that because that’s all these people care about is the perception of them, the money, the material goods.

That’s all they see as a value in life. It’s a sad and pathetic way to go through life by the way. But that’s what these people are owned by the way, the 40 million that he, you know, is under investigation for possibly ceiling. Some of that actually comes from the Republican national committee itself, but it also raises other questions just a couple months ago, there was a report that there’s 170 million from the Trump campaign that the spending is on. Accounted for. That story actually came from CNBC, which is definitely not a progressive outlet, 170 million that’s unaccounted for, Oh, they know where it, you know, wind initially, which was to Brad Parscale’s companies, you know, from the Trump campaign paid to Parscale’s other little companies. They just don’t know why. So I guess it’s, it’s accounted for it’s just unexplained. Cause none of the financial disclosure forms really tell us what that 170 million was actually spent on.

Other than that, it was spent from the Trump campaign to Parscale huh? A lot people are speculating. The Parscale could have been, you know, essentially helping funnel some of this money back to Trump himself. Uh, we’ll see if that happens. Honestly, I don’t think that that’s the case. I do not think it at all, based on the available evidence right now, now that could change when more evidence comes out. But I think what we’re looking at right now is a greedy individual who saw that he was playing with a pot of seemingly endless money and didn’t think anybody would notice. And then when they did notice, he panicked, he freaked out and he suffered a very public humiliating breakdown. That may be the least of his problems at this point, because they’re not going to go easy on him. And if Trump finds out he was stealing money from him, you can bet Trump’s not going to go easy on him either.