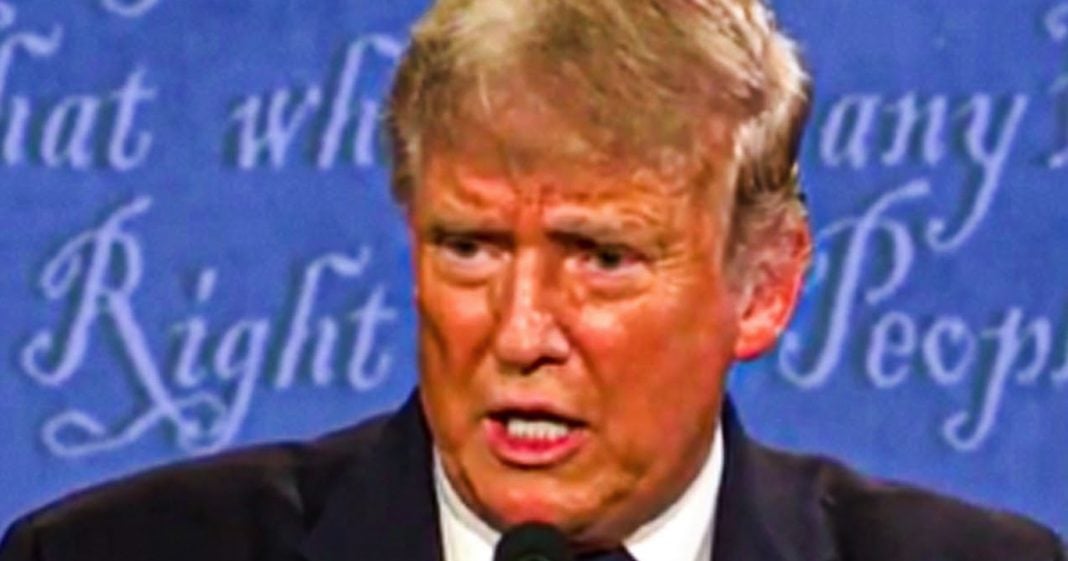 During the Presidential debate, Donald Trump was asked to disavow the violent, radical groups that have rallied behind him. Instead of properly doing that, he told the Proud Boys to “stand back and stand by,” which most viewers immediately saw as a call to action. And so did the Proud Boys. They immediately began celebrating this “call to action” and posted it on their remaining social media platforms. Ring of Fire’s Farron Cousins explains what’s happening.

So last night was the first presidential debate, a lot of ridiculous moments to discuss from that debate. But first, today, I want to talk about one specific thing that Donald Trump said. And I think this was probably one of the most important things that he said during that debate. And that was when he was repeatedly asked by moderator Chris Wallace to disavow the white supremacists who have rallied behind him and who are sparking violence across the country and have been since the early days of his administration. Uh, Trump kinda didn’t want to do it obviously. And so eventually he did, and he said, proud boys, stand back and stand by, stand back in, stand by now for those who, who aren’t quite familiar with, what standby means, it, it means be ready for use. That is what standby is be ready for use.

And it’s not just me that heard that coded message and understood exactly what it meant. Not only did pretty much every single person on the left understand it. The proud boys did too. And they immediately took to their remaining social media platforms because they have been banned from several. Uh, and they posted that this was a historic moment. The shout out, they just got from the president, the message that he sent them. They also believed that it was a secret message telling them to be ready and they posted it on Facebook. They posted that quote in a big little emblem, you know, that’s, that’s their new thing. Stand back, stand by. And that is exactly what they’re going to be doing now. And according to messages, uh, for proud boys forums and, and, and, uh, messaging services, they’ve recruited more people now because of what the president said, they, they actually recruited more people. They’re using what he said to recruit more people much like Al Qaeda use the Iraq war to recruit more people to Al-Qaida, which eventually ISIS did that too. And now our little home grown terrorist groups, like the proud boys are doing the same thing. We’re using the president’s words. We’re using his actions as a recruiting tool.

The proud boys have been labeled a white supremacist organization, uh, or a hate group by the Southern poverty law center. They have been labeled a white supremacist organization by the Anti-Defamation league. They are violent. They are proud of their violence. They make no secret about being violent. And according to reports that came out prior to this past weekend, they have actually been sparking a lot of the violence in some of the protests we have seen. This is not Antifa. This is the proud boys going in, making the other side, violent, making them have to react. And then Antifa becomes the fall boy for what’s actually taking place. And the president didn’t have the courage to stand up to these people because he knows they’re his base. He knows that the, uh, proud boys, which sounds like something off a family guy, he knows that those are his base, those individuals, those in cells, those insecure in their manhood, weaklings out there hiding behind body armor and high powered rifles.

That’s Trump’s base because when you take away the weapon, when you take away the body armor, when you take off the caviar, it’s a frightened little boy standing in front of you. That is what these proud boys are. The kids, Oh, they’re much older than kids, but mentally, psychologically they’re kids. And they’re terrified of everything. And Donald Trump had the chance multiple times last night to disavow them, to disavow all of the white supremacists who support him. And he refused to do it because doing so would cost him almost all, all of his base.