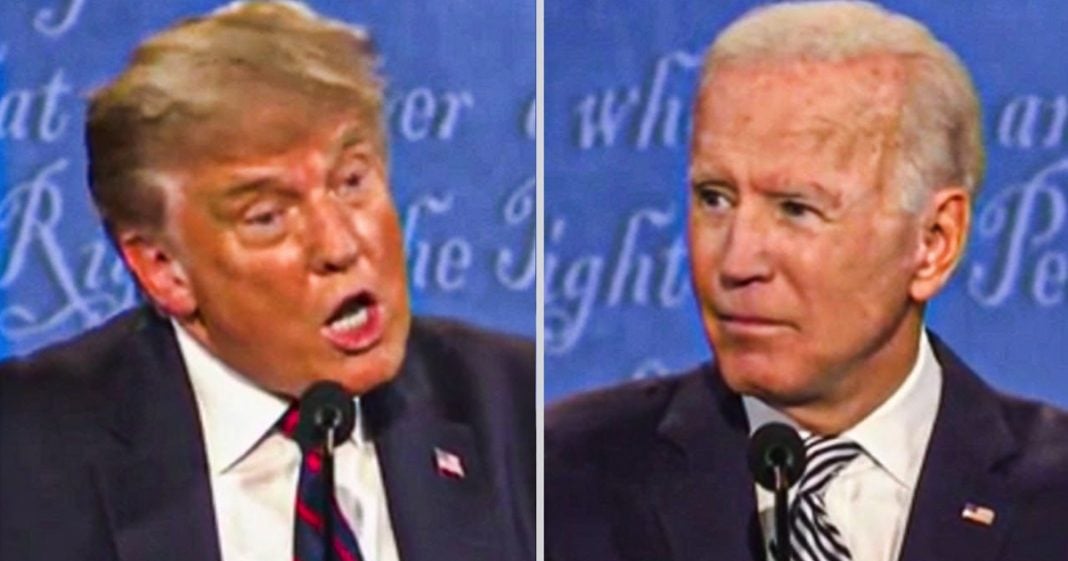 An online poll taken immediately after the Tuesday debate shows that most Americans were neither amused nor informed during the 90 minute calamity, and instead they walked away from the debate feeling “annoyed.” Nearly 70% of viewers said that they felt this way, and if this trend continues, it could easily depress turnout which would ultimately help Donald Trump. Ring of Fire’s Farron Cousins discusses this.

So in addition to Donald Trump throwing out his extremely racist dog whistle to the proud boys last night, uh, the entire thing from start to finish was an absolute, uh, to kind of self censor here, a little bit, a crap show, and that is putting it about as mild [inaudible] as possible. Jake tamper actually described it as a dumpster fire inside of a train wreck. It was awful, and everybody is pretty much in agreement that this is the worst debate they’ve ever seen in their lifetime. Um, and the polling that came out immediately following it from people who watched it is, is terrifying, to be honest. Um, according to the CBS, you go of poll that was taken online immediately after, uh, the debate took place. 17% said they were informed by watching it to 19% described himself as pessimistic, 31% entertained and 69% annoyed. They were just annoyed with the whole thing.

And I understand, yes, those numbers add up to over a hundred percent. Uh, you get to choose more than one thing if you felt the need to, but, uh, yeah, 70% annoyed. And I have to say obviously, yes, you know, a lot of us it’s our job. We have to watch this crap. And, uh, it really was one of the most bizarre and most annoying debates I’ve ever watched. My wife, who is very middle of the road does not follow politics at all, actually got up and left. Cause she said she couldn’t stand it, not just the arguing, but she actually can’t even stand to hear Trump speak because he doesn’t go from point a to B. He goes everywhere else and never actually lands at his destination. And she can’t stand that. Um, she she’s an educator. She, she likes to be able to, you know, when you start talking it’s cause you have a point to make.

And if you don’t ever make that point, it’s obnoxious. She, she also teaches English. So yeah, I could see how that would be very annoying for her. But as far as the rest of the evening goes, what? We had a bunch of insults, uh, personal insults coming from Trump to Biden from Biden to Trump, uh, Biden was clearly not drugged like Donald Trump said he would be, uh, Odyssey. That was a little disappointing. Cause Biden was very subdued kind of sedated look, man. But there were a couple of times Biden got pissed. And the few times he got pissed is when he actually looked in Deering to the public Biden, went into this debate with the better poll number. So he actually had more to lose than Donald Trump did. So if he didn’t deliver a knockout, that’s okay because Trump didn’t either. So I think the net result of this is nothing.

I don’t think this moves the needle Biden did not give a horrible performance. And therefore I do not think his numbers are going to go down. I do not think they’re going to go up because I don’t think anybody. And I’m trying to look at this with the eyes of somebody who who’s not a political follower, you know? And, and that’s the thing. It gets lost on us sometimes too. And, and, and my folks on Twitter, um, not everybody in fact, most of the country are not avid political news consumers. We are, and we’re in this all day, every day. So we look at it one way, but you have to look at it suppose you’re an average voter out there. You watch the press conferences sometimes during the COVID-19 panic and you know, are pandemic, excuse me. And, uh, so you tune into the debate.

You know, I haven’t really seen much of the people for recently. You don’t really know which one you like, and that’s what you see. Do you think that debate last night changed anybody’s minds? Do you think that settled anyone’s votes last night, watching that happen, that dumpster fire inside of the train wreck? Cause I don’t think it did and to his credit. Uh, and again, I got kind of some crap from this for saying this on Twitter. I don’t think Chris Wallace actually did that bad of a job. Yeah. It would have been awesome if he would have called Trump out every time he lied, but that would have been the only conversation we had for the whole night. You know, the MSNBC moderators don’t do that either, by the way, you know, stop acting like Chris Wallace didn’t do it. Cause he’s secretly fought for her.

No, they don’t do it cause they don’t have the time to do it with somebody who spews nonstop lies. Um, so overall I thought Wallace did a decent job. He would be try to shut Trump up, try to shut them both up a couple of times. And then there were times, yeah, he just gave up and didn’t even bother the whole thing. You know, a devolved into Bedlam. But overall I don’t think Wallace did a horrible job. I’ve certainly seen worse debate moderators in my time. So there is insults Biden did get the chance to lay out a couple of really good policies. He also, by the way, took every possible opportunity to remind us that he is not a progressive and he’ll be damned if he institutes any progressive policies, Medicare for all Nope. Green new deal. Hell nah, he has a good environmental plan.

It’s not as good as the green new deal, but it’s still a really good plan, but he’s not doing the green new deal. You know, he’s definitely not given Medicare for all. He’s definitely not going to get rid of the private insurance industry. He definitely does not want to defund the police. And he definitely will not say the black lives matter is a really great organization. That’s disappointing. But I also, and I hate to even say this. I do understand why he refuses to do that. And it’s because he is afraid. He is afraid to take a stand. He is afraid of alienating, even one single suburban white voter. And he thinks that backing any one of those things is going to lose him. Those voters when actually they like those policies. So he’s misguided, he is wrong on it. 100% wrong. And that probably goes back to whoever it is.

That’s advising him is not very good at their job. So there’s that Trump did keep trying to bait a Biden into saying your far left you and new, you know, Bernie Sanders, your socialist, blah, blah, blah. And then Biden would be like DOB. Totally not those things. I’m not far left. I don’t support those policies. And then Trump would snatch and be like, ha, you just lost the far left democratic wing of voters. Not going to get him now. You just lost him. You Ville Hindu matriarch. And then, uh, you know, did Trump get any good lines out? You got some, I’ll say creative insults, but in terms of laying out any concrete plans, having any kind of real explanation as to why 200,000 plus people have died from COVID-19 on his watch, he didn’t have an answer. He tried to blame everybody else. He tried to say, it’ll be worse under Biden.

It will be worse under Biden. You would have done a worse job than me. Deflection and blame is all we got from him. You know, either trying to redirect the question to something else or saying, Nope, it was all these people’s fault. They didn’t know. We didn’t know Jina. Jane did it. So he didn’t take responsibility for a single bad thing that happened. Um, the economy was a big talking point. Trump says, we rebuild the economy. It’s going to be great. Again, folks, the economy hasn’t been great. The economy wasn’t even great under Obama and Biden. You know, that recovery we had didn’t actually happen to the working class. The recovery was limited to those at the top. We did not see an increase in wealth. We have only seen things become more and more unaffordable since that time housing prices still going through the roof. I don’t mean that as a pun that actually just accidentally came out that way, the price of regular goods and services and Trump brought up car prices are out of control. He’s actually right about that. It’s not because cause of pollution,

It’s because a new car, you know, a new SUV and I’m not talking about like a Mercedes issue. I’m talking about like a frigging GMC. You go today to buy a new GMC. You’re not going to pay $20,000. You’d be 60 to thousand dollars for like a GMC or a Chevrolet. That’s insane. That is insane. And it’s insane to me because like hundreds of millions of Americans, we were left out of the economic recovery and we couldn’t imagine paying that much money for, for an American made regular car. That’s crazy. So yeah, that’s what we’re dealing with with the economy and the recovery and the crash and all of that, that point that I made about the recovery, you know, never really happening for, for working class people that should have been brought up. I wish Biden. Wouldn’t be afraid to criticize the eight years of Obama.

I think that would help him if he admits, you know what, Hey, we weren’t perfect. We could have done this. We should have done this. You know, I love Barak. He’s a great guy. He’s a great friend. But even he looks back and says, you know what? I think we could have done this differently. If Biden would come out and say something like that, I think you’re going to win over more of the people on the left. And I think you’re going to win over some of the people in the middle too. You have to admit your failures of the past because there were plenty in that Obama administration, there have been even more under the Trump administration and he won’t admit to any fault. So if Biden steps up and admits that I am a human being and I have faults that I think is going to endear him to the public in a way that Trump could never fully understand. But overall, if I had to give a closing thought on this debate, it was awful. It was beyond awful. It was like the worst awful. But luckily for both candidates actually, unfortunately for Trump and fortunately for Biden, it probably didn’t change a single person’s mind out of anyone who watched it.