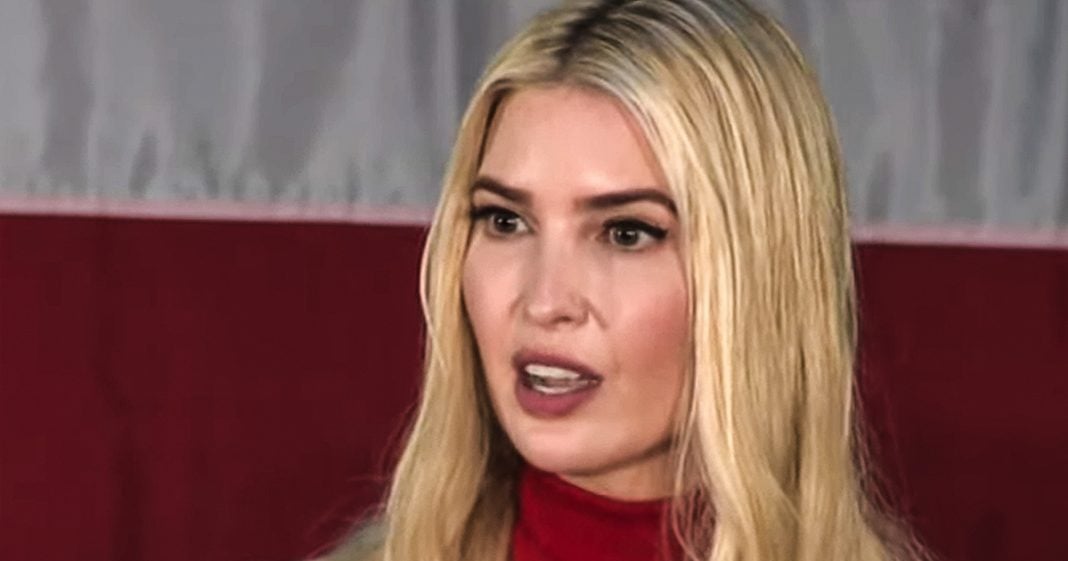 The reporting from The New York Times about Donald Trump’s taxes may have accidentally revealed a major crime committed by Ivanka Trump. According to the information, the Trump Organization paid Ivanka a few hundred thousand dollars for consulting work, even though she was already on the payroll of the Trump Organization. But that’s only the tip of the iceberg for Trump’s favorite daughter, as Ring of Fire’s Farron Cousins explains.

As part of the release of the Donald Trump tax information for the past 20 years, uh, another little tidbit has started to kind of take shape. And that tidbit is that Ivanka Trump may be involved in some kind of tax fraud scheme. Here is how that scheme works out. According to the records released by the New York times, the Trump organization, Donald Trump paid a consulting firm, $747,622 Ivanka Trump that same year, according to her own financial disclosure forms that she released, uh, received $747,622 from a consulting firm that she just happens to own. So the Trump organization that year paid that amount of money to a consulting firm that is owned by Ivanka Trump, who also happens to be one of the executives of the Trump organization. So she paid herself. So it seems from the documents $747,622 from her own company to her other company.

Now This is a legal gray area. If the Trump organization, where he publicly traded company that had shareholders, a board of directors and they found out one of the executives was doing this, they absolutely would likely file fraud charges against that individual, uh, you know, for kind of self-dealing self enrichment, things like that. That is absolutely something we see happen. Trump organization, not a publicly traded company though. It’s a private company. As far as we know the only board of directors or just the Donald and his kids, none of them are going to press charges against Ivanka. So the act alone, you know, her receiving money from the company, she works for to pay a different company. She works for where she apparently personally got the money because she reported it as her income. Not necessarily illegal as far as we know what might be illegal though, is if this was actually just a move to shield finances from the IRS to tell the IRS. No, no, no, no. Um, we, we paid out that money. We can’t be taxed on it. That was an expense.

They didn’t tell the IRS. Yeah. That was an expense that just went over to Ivanka his personal bank account. Yeah. See that’s fraud. That’s 100% illegal. And because this money was paid for undisclosed consulting fees, kind of looking a lot like fraud and it’s kind of looking a lot like Ivanka Trump was also involved in it, along with her daddy, Donald, perhaps the other two moron sons were involved in it. Donnie jr. And Eric who knows at this point, all that matters is that there is a lot of information out there suggesting the Trump family has been engaged in fraud, which likely explains why Donald has been so reluctant to release his taxes. There is nothing preventing him from releasing his taxes. There is nothing being under audit by the IRS means absolutely nothing in terms of releasing your taxes, he could release him today. And in fact, if these stories were fake news, as he claims they are, he’d release him to prove everybody wrong Whitney, or if they were lying, if they just made this story up, I’m willing to bet the libel lawsuit would have already been filed. But it hasn’t. I have zero reason whatsoever to doubt the New York times story. And it appears very likely that at least two of the four executives that the Trump organization, Don sr and Ivanka, it certainly is giving off the appearance that the two together engaged in tax fraud.