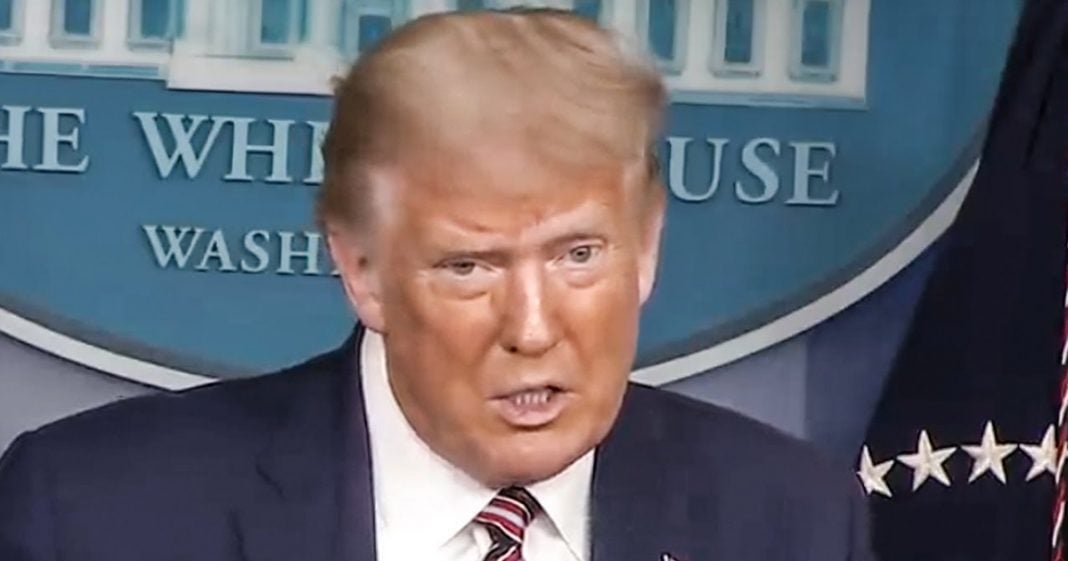 According to a massive leak of Trump 2016 campaign documents, the campaign actively tried to stop MILLIONS of African Americans from voting in that year’s election. The campaign had listed these individuals in their files as “deterrence,” and targeted them specifically to convince them that they shouldn’t vote. This story also means that former Trump campaign manager Brad Parscale likely lied to Congress, which could explain his episode this past weekend. Ring of Fire’s Farron Cousins discusses this.

Channel four news over in great Britain has a uncovered, let’s say a treasure trove of documents and data from the Trump 2016 presidential campaign. And what they uncovered in that campaign is that Brad Parscale Donald Trump’s a digital manager back in 2016 was targeting African Americans here in the United States for what they called deterrence. In fact, there were several million black Americans targeted for this deterrence project. Uh, here’s the promo, the channel four news over in Britain put out this weekend, the actual program aired yesterday. So here’s the promo where they kind of lay it all out really quick. Take a look. Hold on. Trump has long been accused of ignoring the voices of millions of black Americans. Now we can reveal how he has actively tried to silence them. We’ve obtained the database used by Donald Trump’s 2016 presidential campaign, a vast collection of files on almost 200 million us citizens. It shows what they knew and what they did. The secret tactics that helped turn Donald Trump into the president.

So what they revealed when the program actually aired, and you can read the written version, follow the link in the description, it’ll take you right there. Um, was that Brad? Parscale the Trump campaign. All of them together worked to target roughly three and a half million African Americans here in the United States with targeted misinformation. These were African-American’s in swing States. These are African Americans in red States, wherever it was, they were strategically picked. These individual people were strategically picked to keep them away from the polls because their appearance, their vote in the 2016 election absolutely could have and would have swung the election to Hillary Clinton. Here is what else we know over the weekend. Uh, actually shortly before this whole, uh, channel four news report was revealed. Brad Parscale who for a long time this year was Donald Trump’s campaign manager was unceremoniously D a moated demoted earlier in the summer for doing such a horrible job.

Uh, he had a bit of a, I guess you’d call it a mental breakdown. Authorities were called to his home, uh, where he had a weapon was threatening to harm himself. He was put under an involuntary 72 hour psychiatric hold here in the state of Florida. It’s called the Baker act here in Florida. They Baker acted him to make sure he didn’t harm himself or harm anyone else. And that happened right before this story came out, which implicates him in criminal activity. Oh, not necessarily the targeting of African Americans for disinformation while it’s dirty and dishonest. That itself is technically not illegal. What is illegal though is lying to Congress. You see Brad Parscale has testified before Congress in the past. And Brad Parscale told Congress that no to the Trump 2016 campaign never, never targeted anyone by race. Heck no, we didn’t do anything like that.

Brad, Parscale told Congress with this report coming out, showing that Brad Parscale literally did that. That means he lied under oath to Congress, and that is against the law. Brad Parscale could now actually be arrested, should the house choose to press charges against him and they should. And I think that is what we were looking at, uh, with poor skills breakdown on Sunday. I don’t think maybe I’m wrong and I don’t want to, you know, but me personally do, I think it was a legitimate mental health episode of a man that does not have a history of any kind of mental illness. No, I think probably what we were looking at was more of a warden Norton Shawshank redemption type moment. I honestly think that’s what it was. Brad Parscale knew this report was about to drop. He knew it would implicate him in criminal activity with regard to his congressional testimony. And he panicked. That is what I think happened. So the big question is now, okay. Obviously we know the Trump campaign did this in 2016. There is little reason to believe that they are not also doing this in 2020. How do we combat this?

The answer to that’s a little more complicated, isn’t it? Sadly, I don’t fully know short of intensive regulations on social media outlets, which we do need, but until that happens, things like this are going to be allowed to happen. Now we have already seen that job postings cannot be targeted to specific races or ages or anything like that. Facebook has lost several lawsuits regarding those things. A will that end up applying to political advertisements, political misinformation time will tell, but considering that demographics are an important thing. When targeting people that you want to vote for you, you do pander to certain, you know, demographics. I don’t know that this will ever be illegal. And as such, it’s on people, it’s on the individual, it’s on everybody out there to do their best to not only debunk this misinformation when it happens, but to either block it on your Facebook, which you can do, you block it on Facebook, Twitter, whatever it is it’s coming at, you, you can block it, but you also have to understand, you have to have the tools to understand that it’s BS because without that, you’re going to see this misinformation. They’re targeting it at you. They’re trying to make it look as legitimate as possible, but we have to do a better job of calling it out of pointing it out and of making sure we don’t see it again.