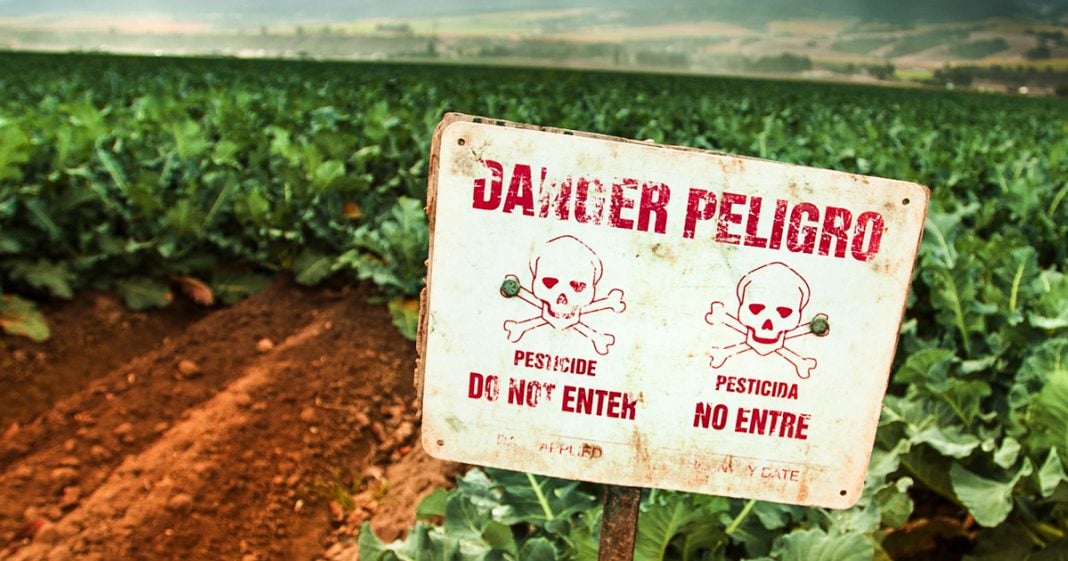 The Trump Administration, specifically the Environmental Protection Agency, had the opportunity to ban the use of a dangerous pesticide that has been shown to damage the brains of children. Instead, they decided to ignore all of the available data about the dangers of chlorpyrifos and claimed that the data was “inconclusive.” This is yet another slap in the face to science which is becoming a common theme in this administration. Ring of Fire’s Farron Cousins discusses this.

Tuesday number four, three, two, one in a stunning blow to science last week, and a massive blow to human health here in the United States. The Trump administration’s EPA run by former fossil fuel lobbyist. Andrew Wheeler decided to not ban the use of a toxic pesticide known as core pirate. Most core Pyre focus has been around for decades manufactured by Dow chemical, and it also destroys the developing brains of children. It also has pretty significant health effects on adults, on crops, on the landscape on water and animals. But you know, the biggest threat of it is the fact that it absolutely can ruin the lives of children if they are overexposed to it or exposed and large amounts of it, uh, as they’re developing, which would include by the way, anyone consuming a large amount of the crops upon which it is used. Anyone who has a family member of a farmer using it, or anyone who happens to live near a farm that sprays this and uses it, it seeps into the groundwater.

It gets carried away in the wind and drift all of that. We’re talking about thousands upon thousands upon thousands of children in the United States at risk of being overexposed to [inaudible] and suffering from what the EPA itself found. Um, developmental delays, memory, damage, lowered IQ, and a reduction in intent and attention span. And those are just a few of these significant dangers that chlorpyrifos poses to the developing brains of children. But last week, Donald Trump’s EPA, again, run by a former lobbyists, saw the data. And this was, I think their third assessment of [inaudible] after they decided to not ban it back in 2017, they said, we’re going to look at it more, but in the meantime, feel free to keep using it. We don’t know if it’s dangerous, we’re going to look at it again. They knew it was dangerous, then they knew it was going to be dangerous after this third assessment.

And sure, the APA found they’re like, wow. Yeah, it’s pretty, pretty bad, but we’re going to classify these results as inconclusive. So you can just keep using it because we really can’t determine. Now here’s the thing. Every major university study that has ever looked at the dangers of [inaudible], they have all found the exact same thing. And a lot of those studies you can actually find, go to the link in the description of this video. Uh, the story from common dreams is going to link you to a lot of those studies and they all found the same thing that this stuff is a toxic neurotoxin that can absolutely destroy the lives of children. It can destroy the lives of adults too, by the way, but mostly the kids. So here’s, what’s crazy about this. It is not as if [inaudible] is the only possible pesticide available for use in American farms. We there’s countless pesticides. You can use one of a hundred, one of a thousand different pesticides. Why does this one have to stay on the market?

The answer is because I don’t think people in this country understand how much power. I mean truly how much power the agrichemical companies have here in the United States. I know you’re watching this. You’re pretty well informed about things. You know, we talk about corporations all the time, but I have to tell you, one of the things that often gets overlooked is the fact that the agrichemical companies have been calling the shots in DC in terms of their own regulation for decades, they’ve done it under Republicans. They’ve done it under Democrats. They got bill Clinton to reverse the EPA zone findings. By the way of how toxic Roundup can be.

These are people who know what they’re doing, and they know how to really not get caught like other companies doing it. You know, there’s not exactly, always that money trail. You know, you, you look at pharmaceutical companies that get preferential treatment that don’t get in trouble by the federal government. When they put out a pill that kills 2 million people. Well, you can look it up. You see their direct donations, who they paid and all that. Agrochemical little more fuzzy. Oh, they’re still given money, but they’re also putting up a lot of front groups too. They’re also paying academics to say that this harmful toxin they’ve created here or this one they’ve created, there is totally not harmful. They’ll pay you tens of thousands sometimes to put your name on one of their ghost written papers. It’s shady, it’s dirty, it’s deceitful. And it is unique to the agrochemical industry here in the United States. And that is why chemicals like chlorpyrifos that will ruin the lives of a child, millions of children, potentially over the years. That’s why these things are allowed to stay on the market.