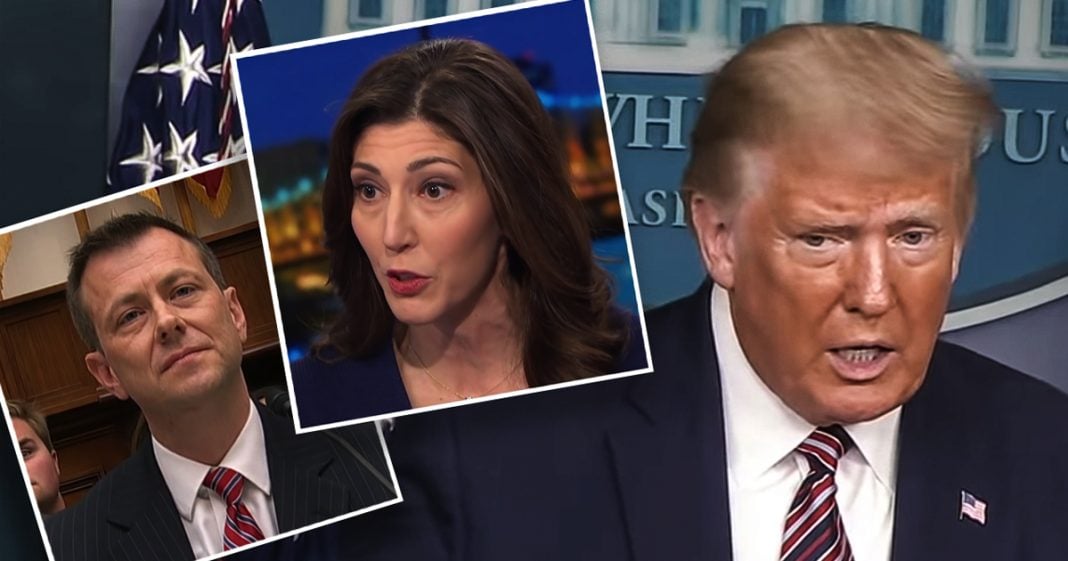 Donald Trump is being sued for violating the Privacy Act by Lisa Page and Peter Strzok, the two former DOJ employees who exchanged text messages about Trump before the election and later worked on Mueller’s team. Last week, the DOJ tried to get the lawsuit dismissed, and the judge in the case refused to dismiss saying that neither the President nor his legal team have offered a shred of evidence to suggest that the release of the text messages was relevant or necessary. Ring of Fire’s Farron Cousins explains what’s happening.

Late last week, uh, judge Amy Berman, Jackson issued a stunning rebuke to Donald Trump and the entire us department of justice. Here’s what’s happening right now. There is a lawsuit taking place for a violation of the privacy act. On behalf of two individuals, you probably know their names, Lisa Page, and Peter struck, you know, the two people that Donald Trump loves to bring up at his rallies as evidence. You know, that the whole thing was rigged against him, that it was a hoax, that it was just a ploy to get him out of office. The lovebirds, he calls them and sometimes actually is imitated the noises that they would have made while making love. Yeah, those two. And, uh, they had their text messages released obviously by the DOJ in an effort by the DOJ to kind of quote, prove that the whole Russia investigation was some kind of hoax against the president, a deep state COO, if you will. And trust me, Republicans have eaten it up. They always point to page and struck as evidence that there was a coup happening behind the scenes to take down Donald Trump. And it’s because they release those texts

Messages that according to Charles Judge Permian Jackson, uh, shouldn’t have been released ever. They weren’t relevant to anything. And that is exactly what she told the department of justice last week, when they attempted to have the entire privacy act violation lawsuit by struck and page thrown out, they wanted a summary judgment to officially just end the suit before it ever went to trial. And judge Berman Jackson said what she specifically said that it was stunning that you would come to me and try to get this thing dismissed when you haven’t shown at all in any way, shape or form why these text messages would need to be released to the public page and struck her arguing from their lawyers, that these text messages were released as a way to basically create the straw man argument, that page instruc were having an affair and they were against Trump because they didn’t like him in their text messages. And that gave Republicans something to cling, to, to claim that the entire best the investigation was a hoax. It was not relevant to any information. It was not relevant to the investigation itself. Folks. It truly isn’t every single investigator, regardless of where they are in this country. If they’re working for the FBI, if they’re working for a local prosecutor’s office, if it’s a local guy in a police department, every investigator has their own personal biases.

Okay? It doesn’t affect their job, or at least it shouldn’t. I’m sure some of them, it does. Every doctor in this country has their own personal political beliefs. It doesn’t affect their jobs, same thing with most other professions, because most people have political beliefs one way or another, and they are able to go about their day without it affecting their job. Me, not so much. Obviously my political beliefs do affect my job cause my political beliefs happen to be my job. Nevertheless, what we’re seeing right now is how this should play out. You know, if the department of justice is able to go into court and explain rightfully why these text messages need to be released, what relevance it had to, whatever the hell it is they were doing. Cause that’s still a question Mark too. Like what were you even trying to do? Because you can’t just say you were trying to vindicate Trump because that’s not a thing you do.

So you got to come up with a better argument. You have to actually have a legal argument for why you released these text messages. And that’s basically what the judge said. So the DOJ is going to get their opportunity to do that. At trial struck and page are going to have their opportunity to explain their side of the story in a trial. And hopefully these trial transcripts do get released. Cause there’s a lot of people who do kind of want to know what was going on behind the scenes, did their political views sway them possibly, but they were put on the project. So, okay. That would actually make it not their decision to do this, right?

I think no matter how this lawsuit ends, it’s going to make struck and page look better in the DOJ look, worse. Problem is everybody’s already moved on from this story. Republicans are forever going to believe that struck and pager villains, they’re not going to pay attention to anything that’s happening. They probably don’t even know there’s a lawsuit happening right now. So these two individuals because of Donald Trump’s actions will forever be the villains in the eyes of Republicans because that’s how the media works. They covered struck and page relentlessly when their text messages became public, but they’re ignoring it. Now that struck and page have a very, very good lawsuit going against the administration that easily could exonerate both of them.