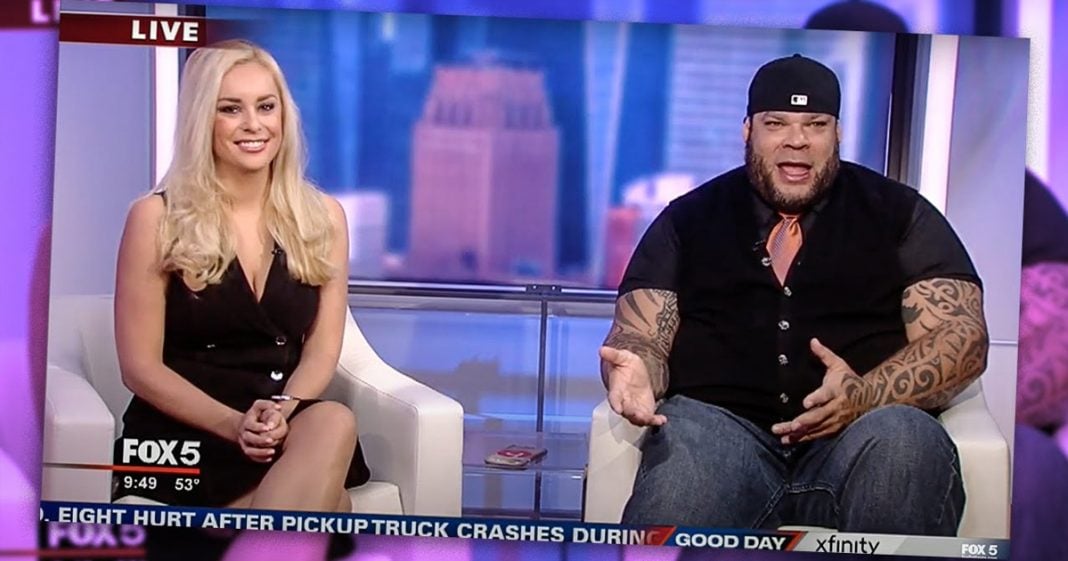 According to an ongoing lawsuit by former Fox host Britt McHenry, her former co-anchor George Murdoch threatened to send her pictures of his genitals if she ever displayed a “negative” attitude towards him. The court case has revealed text messages that prove the story, and the lawsuit stems from retaliatory efforts the network made against McHenry after she brought the harassment issue to management. Ring of Fire’s Farron Cousins discusses this.

According to an ongoing harassment lawsuit brought by a former Fox host, uh, the Fox host in question Britt McHenry received nonstop harassment from her former, uh, co anchor on a show called un-PC a man by the name of George Murdoch. And according to the text messages that have now been released as part of this ongoing lawsuit, at one point, Murdoch actually threatened to send this woman pictures of his genitalia. If she agitated him, uh, specifically it says a McHenry quotes, Murdoch, a former professional wrestler as warning that any negative attitude from her would be met with dick pics. That’s, that’s actually, uh, in this as part of the lawsuit, like that’s, that’s the thing he did according to this suit. And according to the evidence that she has provided. And that was just one of many instances that make Henry says Murdoch had harassed her.

Um, at one point he also told her you’ll need these legs to run from me, uh, as part of an ongoing, sexually explicit thing. Um, he also would touch her inappropriately and she would do her best to pull away. But Fox tried to argue that her pulling away pulling away from his advances, pulling away from his touches. And this, again, this isn’t a lawsuit. They argued that well, her pulling away wasn’t necessarily her saying no, they’re legitimately trying to say that her not letting him touch her is not the same as her saying no, I have Fox news literally walked into court and said, judge, no means no anything else means, yes, this is insane. Now I am willing to bet. I’ve never seen the show, which is no longer on the air. un-PC, uh, I’m willing to bet. I agree with Britt McHenry on absolutely nothing, not a single issue that I think her and I would see eye to eye on, but that does not matter in this particular instance, what she went through at Fox news, according to this lawsuit, assuming it is all true.

And I have no reason to doubt it. She has, the evidence is wrong. You know, put politics aside for a moment. Again, the show was called un-PC. I imagine it was probably a pretty disgusting show, not explicitly discussing, but if you know, you get what I mean by that it still doesn’t warrant any of the behavior that Murdoch engaged in it doesn’t warrant any of the harassment that McHenry received, just because you work at Fox news and that is an evil organization. Does that mean you deserve any of this that happens to you? I hope with every fiber of my being that Britt McHenry wins this lawsuit, I truly, truly do because nobody deserves to be put through what she was allegedly put through. And again, the evidence seems to suggest that she’s 100% telling the truth. The arguments from foxes lawyers for Murdoch, who as far as I know, is not a member of the Murdoch family.

Uh they’re they’re pathetic and they’re, but hopefully this also sends a message to not just the minute Fox news, but hopefully to the women as well. If this is happening to you, come forward, you don’t have to come forward publicly and McHenry McHenry, excuse me, even says that she came forward to the admin at Fox news to human resources. She approached them with these problems with text messages and said, listen, I am being harassed. Somebody do something. And you know what they did. They promoted Murdoch gave him his own show on Fox nation, which has actually were on PC air as well. And they cut back on McHenry going on other Fox news programs. They retaliated against her. It seems, and they promoted him. So when I say come forward, I don’t mean come forward to the people at Fox news. They have proven time and time again.

They’re okay with this behavior and they’re actually going to reward it. And they’re going to punish you. What I mean is come forward to a lawyer, I guess, technically you have to bring it to HR first, just so you can say, look, I brought it to HR, but I would bring it to HR. Then I would immediately walk out of the human resources office, go downstairs, get in a cab, go to a lawyer’s office and go ahead and get all of this rolling talk to a lawyer immediately following talking to management. And even when you talk to management, let them know to like, Hey, I’m letting you know so that you can address it. But I also want you to be aware. I’m also going to talk to a lawyer as well. I’m not planning any legal action, but I want to make sure that I have gone through all of the appropriate channels so that this does not get worse. So that nothing happens to me. So after I leave here talking to you, telling you what’s happening, I will also be talking to a lawyer just so we have it on record. Do that, let them know that you were serious because what we’ve seen happening to the women at Fox news is worse than obscene. No woman deserves this, this, this, this is not okay, but Fox news seems to be cultivating this within their ranks. And the only way to stop it is to take it to court and get it forcibly removed.