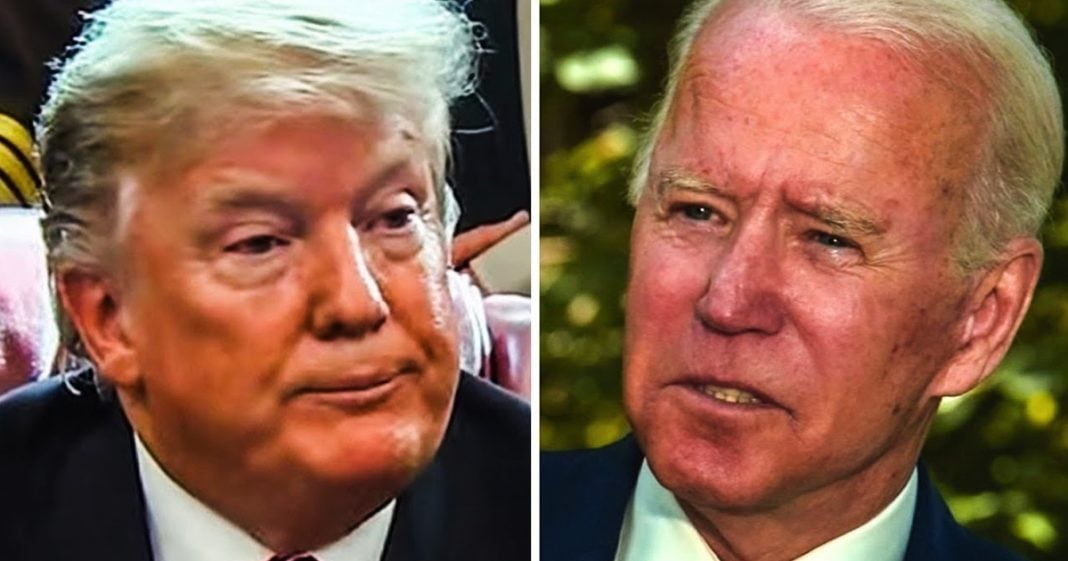 Donald Trump is buying into the Republican conspiracy that Joe Biden was heavily medicated before a recent townhall event, and that’s the only reason why he was able to do such a great job. Apparently this has been eating away at Trump for the past week, and he woke up Sunday morning demanding that Biden take a drug test before the Presidential debate on Tuesday evening. Ring of Fire’s Farron Cousins explains what’s happening.

Even before the New York times report yesterday, about how Donald Trump doesn’t pay taxes. Even before that came out, uh, Trump apparently woke up in a bad mood. He knows that he’s got his debate with Joe Biden on Tuesday. Uh, he knows that that’s kind of make it or break it if Biden does well. It’s kind of, you know, going to seal the deal for Trump, but either way, he woke up in a bad mood and he decided to take it out on Joe Biden in a way that everybody could see. So Donald Trump wakes up Sunday morning, gets on Twitter as usual and tweets out the following. He says, I will be strongly demanding a drug test of sleepy Joe Biden prior to, or after the debate on Tuesday night. Naturally I will agree to take one. Also his debate performances have been record setting on even to put it mildly only drugs could have caused this discrepancy followed by three question marks.

Yeah. Yeah. The, the, the guy, your opponent is the one on drugs. When you woke up at like, you know, tweeting this crap out at 6:00 AM because you just woke up so furious, uh, plus in, we kind of see you in a speech recently, we looked like a little piece of Adderall shot out your nose, and there’s been rumors of you crushing up and snorting Adderall since the day you became president, like that’s been a thing that’s been talked about, but you’re going to accuse Joe Biden of being one. Look, here’s the reason all of this is happening right now. Joe Biden recently did a town hall eventually after Donald Trump’s town hall event, Donald Trump did horrible. Joe Biden actually did really well. Uh, shockingly well, and so of course in Trump world, the only possible explanation for this is that he was on drugs, but here’s the thing.

What kind of drugs do you think he’s on? If he’s taking something like Adderall, that’s just a prescription drug, right? It’s not like he’s doing something illicit. It’s not like he’s shooting up heroin in the back of the auditorium and then going out there and giving answers. He’s not high on meth. He is not doing a line of Coke. If it’s Adderall, it’s Adderall. I mean, look, if it’s an illicit drug, okay, sure. He’s probably not supposed to do that at his age, but I don’t think Joe Biden is backstage in his mid to late seventies doing actual hard drugs to be able to get through a town hall. I think he did a decent job because he was prepared. But see, that’s the difference with Donald Trump. He doesn’t understand that that’s what you have to do in those situations. You have to prep. You have to be ready.

You have to practice because Trump doesn’t do any of that. And so of course the only explanation could be the Joe Biden was all hopped up on goofballs. Apparently. So listen, you want to drug test them drug test. You want to give us a drug test, give us a drug test. No one cares. If he has a prescription for Adderall, there’s nothing you can do about it. Totally legit. Not to mention the fact that if we were to find out the Joe Biden is in fact taking Adderall, that actually would mean that he is not experiencing cognitive decline, but perhaps suffering from adult onset ADHD, which would mean that his mind is still fully functioning, firing on all cylinders. He just has add, and he takes Adderall for it. And that, you know, does his best to correct it. That would actually give people more faith in Joe Biden’s cognitive abilities.

So once again, we’re looking at a situation where no matter how you slice it, Donald Trump is going to lose. And his insistence that Joe Biden is somehow on drugs. It’s absolutely absurd not to mention the fact that it doesn’t matter if Joe Biden has something that he takes to make him as clear as he was in that town hall. Great. You need to be taking that all the time, because that was a fully functioning human being versus some of the other stuff we have seen from Biden. So if it’s Adderall, take some Adderall. If it’s something else, maybe consult a physician first, but whatever you did in that town hall, if you bring that to Tuesday’s debate, Trump doesn’t stand a chance.