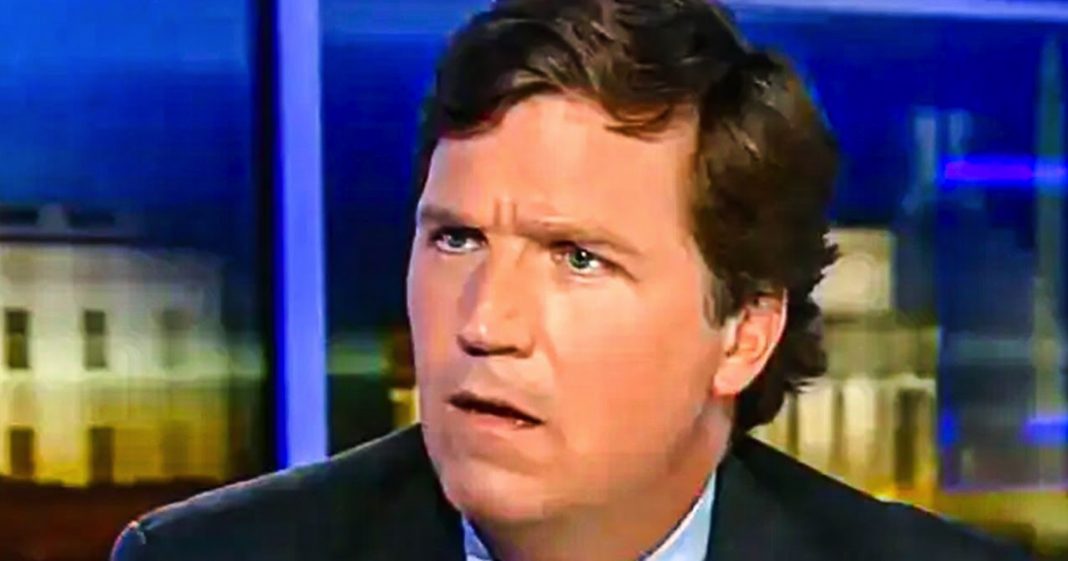 Right wing media consumers should spend a little more time reading court opinions and legal transcripts because they would find that some of their most beloved hosts are doing little more than putting on a facade in order to up their ratings. The latest example of this is Tucker Carlson, who last week was thrown under the bus by his own network in court when they claimed that NO REASONABLE PERSON would take Tucker’s comments seriously. Ring of Fire’s Farron Cousins explains what’s happening.

Late last week, a federal judge ruled that Tucker Carlson should not be taken seriously by anyone. That’s actually a part of the ruling by the way. Uh, and the reason by the way that this judge ruled Tucker Carlson should not be taken seriously by anyone is because lawyers for Fox news who were fighting a defamation suit against Tucker actually went into court and argued successfully. According to the judge that no reasonable person should take what Tucker Carlson says seriously. Now Fox won the case because they were able to argue this, that case by the way, was brought by a former Playboy model. Karen McDougal, who had an affair with Donald Trump and back in 2018, I believe it was Tucker Carlson said that it sounds like McDougall was extorting Donald Trump. And it was that statement that got him in trouble. She sued him for defamation last week, federal judge said, Hey, it’s not defamation because he can’t defame you because no normal person would take this clown seriously.

So it sucks for MedU but McDougal. Um, but it sucks even more for Tucker Carlson because your own network, your own lawyers had to go before a judge and be like, listen, you’ve seen the guy, right? I mean, what, what normal person in this country is going to look at that and be like, Oh yeah, yeah, I can trust him. No, everybody’s going to look at him and be like, wow, what a goof ball? We can’t listen to a word. He says, in fact, the judge said this part of the ruling of that, the network, a quote persuasively argues that given mr. Carlson’s reputation, any reasonable viewer arrive with an appropriate amount of skepticism about the statements he makes. So if you’re a reasonable person and you’re watching Fox news, you’re going to conclude that this guy’s not telling the truth. So the converse of that means that if your watching Fox news, if you’re watching Tucker Carlson and you find yourself agreeing with him by Fox news, his own admission, your not a reasonable person, that’s what that means. And that’s what these right wing media consumers have to understand.

They don’t even take themselves seriously. Tucker Carlson is not the first person to have his reputation destroyed in court. Think back to Alex Jones. During those custody hearings, when his lawyer actually went and argued, this is all an act. He’s not really crazy. He doesn’t believe the things he’s saying. It’s an act. He is playing a character. Do the info Wars, viewers care. No, cause they don’t pay attention to stuff. Are Tucker Carlson’s viewers going to care? I mean, he is the highest viewed person in the history of cable news. And a court has ruled that a normal person, somebody with a fully rational brain would not take him seriously. That is now a legal ruling in the United States that you can’t take Tucker Carlson seriously, unless you’re not rational. Sorry, folks. The courts have spoken. If you believe everything talker, Carlson says, then you’re no longer considered a rational person in the eyes of the law.