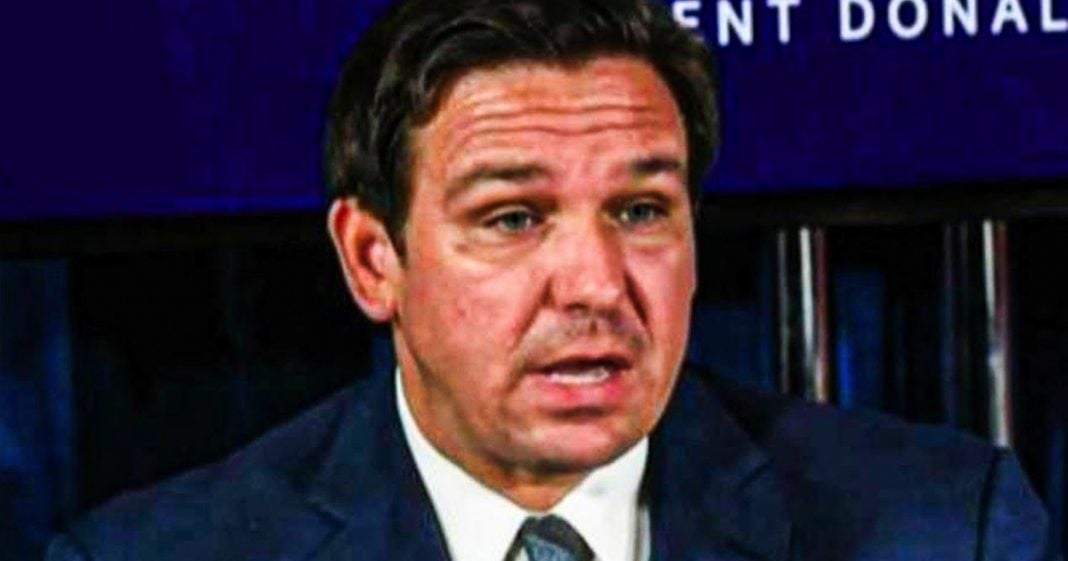 Ron DeSantis, the Trump-loving governor of Florida, held a press conference last week where he announced that the state was simply giving up and that he was reopening everything. No more restrictions on bars or restaurants, no more mandatory mask orders – NOTHING. And he told us that it was ok because only a few of us were going to die from it. Ring of Fire’s Farron Cousins explains what’s happening.

Ron DeSantis, the Republican Trump loving governor from my state of Florida here came out late last week. And even though he didn’t say these words, he admitted more or less that Florida’s given up. We are no longer in the state of Florida going to even attempt to control our COVID-19 outbreak to put it another way he came out. And again, even though he didn’t use these specific words, he told us that coronavirus one, and we’re all just going to have to suffer through it. That is what governor Ron DeSantis, who ran for governor in 2018 on just a, I love Trump platform. That’s what his ads were, had his little a, I think she was less than two year old daughter playing with bricks. And he was like, that’s right, sweetie. Build the wall. It was a totally cringe, uh, ad. And we actually talked about it at the time, but nevertheless, this guy who’s in love with Trump came out last Thursday, said we’re lifting all restrictions.

No more COVID restrictions were not even going to attempt to slow the spread, even though here in the state of Florida, by the way, uh, we’re still getting thousands of new cases per day, right? We’re not seeing the 10,000 a day numbers that we were, you know, back in mid summer. Um, but that’s all because we stopped the testing. We shut down a bunch of testing sites. So, you know, as Trump says, you don’t do any testing. You don’t see the numbers are idiot. Republican controlled government here said, Hey, that’s a great odd deal. Let’s blue lay it. And they did it. So, so we cut all our testing centers and sure enough, our numbers went down, but not because the numbers actually went down, but because we just weren’t looking for it anymore. And if you don’t look for it, you’re certainly not going to find it, but we’re still, still seeing several thousand per day.

So even without these, you know, free testing sites, you have to go to a doctor’s office or an actual hospital get tested, still seeing thousands per day. But to say it just comes out last week, actually holds up a little chart. Here’s the picture. Here’s the still shot where he’s holding up this whole picture. And as you can see, he’s got it broken down by age group. Look, most of you aren’t going to die is what he’s saying there. Most of you, aren’t going to die. Most of you now, some of you will, some of you are absolutely going to die, but I don’t care. Except here’s the thing Ron, you should, because that last whole number in your chart, you know, the, the elderly voters, the 70 and up you hell even the 50 to 69 and up that’s your base dude. That’s Donald Trump’s base for the general election.

Do you know how many Republican voters are going to die in the state of Florida before the 2020 election? Because of your decision here. I mean, shouldn’t, you at least want to protect your own, but you’re not. You’re not even willing to do that. It’s not even tourist season here in Florida anymore. So that’s what I don’t understand. Like why reopen the bars and restaurants and all this crap. We don’t have the massive amounts of tourists coming in. It’s the slow season. It’s the off season. Anybody who has ever had a job down here, uh, working in one of those places, I’ve had some, uh, growing up. We know what off season means. It means hope you saved your money from may to August. Cause you ain’t making any for the next eight months. So why reopened now? That’s what doesn’t make any sense. Our numbers are not looking good.

We have over 700,000 cases down here in Florida. So far, we will hit a million. We will hit a million long before election day. I promise you. And he doesn’t care. He doesn’t care. He’s given up. He’s given up because he wants to appease Donald Trump because he wants to appease those freaks. Those children who go marching through a target saying, take off your mask, take off your mask. That’s who this moron is appealing to these people who eventually are gonna win themselves a Darwin award. Not to mention the fact that not only are we reopening bars and restaurants and lifting restrictions, he has also made it illegal for any city or locality that has mass mandates in place. You can keep your mask mandate, but you cannot Institute any punishments. If people don’t wear a mask, you can’t issue a fine, you can’t do anything which makes the mask mandates completely toothless.

Like they may as well not exist because you can’t actually enforce them. So if you’re not in Florida, um, do call on a higher power, whatever it is to, to protect us down here, uh, whatever it is you believe in, ask that to protect us because I’m terrified. Now I’m not living cowering in fear, but I do know how stupid the people down here are. And I’m not going to sugarcoat that because we’re a state of morons. We, we really, truly are. Things are going to get bad here. Lots of people are going to die, but don’t worry because as our governor assures us, most of us, most of us will survive his idiotic leadership.