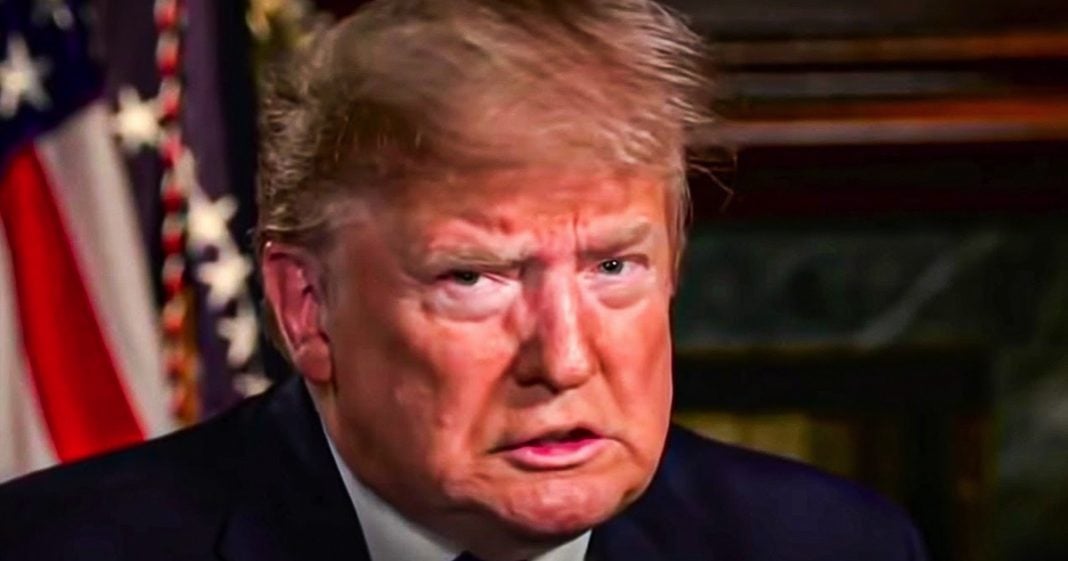 An explosive new report came from the New York Times yesterday, revealing that Donald Trump only paid $750 in taxes the year he was elected president, and that’s still more than the ZERO dollars he paid each year for a decade before that. His base is already making excuses for him, but middle America might see this a little differently. Ring of Fire’s Farron Cousins discusses this.

So it was revealed yesterday that, uh, there’s a good chance you are paying more in taxes each year than Donald Trump. The alleged billionaire president of the United States, according to a bombshell new report from the New York times, Donald Trump for the 10 years, uh, before 2016, payday whopping $0 in taxes every year for a decade from about Oh five to 2015, Donald Trump paid $0 in yearly federal income tax. And then in both 2016 and 2017, he paid $750. Each of those years in federal income tax to the United States government. This is according to 20 years worth of tax records that the New York times somehow got a hold of. And so now we know now America knows that Donald Trump for the last 15, 20 years, uh, has essentially not been paying taxes now, as it stands right now, there is no indication that anything Donald Trump did was illegal.

So it’s not necessarily tax evasion, but it is 100% tax avoidance, but I will get more into the legality of it. And just a moment, because there are some, uh, pretty big discrepancies that do indicate there was likely something illegal taking place, or at the very least something incredibly dishonest on behalf of the president. But let’s get the first thing out of the way, right? Because everybody on social media yesterday was talking about this. Once the story broke, this is all, anybody was basically even allowed to talk about it. Um, and then you had the folks, you know, the, the curmudgeonly type that just hate everything because they think they’re supposed to hate everything. Uh, those folks coming out and saying, it doesn’t matter, his base, isn’t gonna care his base. Isn’t gonna care. They’re gonna applaud him for it. They’re going to say, he’s great for doing it.

And those folks are right by the way. Um, there are little, uh, legitimately Trump supporters out there, including plenty of blue checks on Twitter that say like, Oh, this is good. I actually like him more now because of it, those people are idiots. And let me tell you, we knew like you’re not telling us anything. We didn’t know by saying Trump’s base is going to care. We know that we’re not idiots. Trump’s space are not the only people that vote in the election though. I don’t think you realize that like all these curmudgeonly types on Twitter who say no base, isn’t going to care. We know, we know Donald Trump could, as he said, himself, shoot somebody in the middle of fifth Avenue and his base wouldn’t care. They would think it’s the greatest thing in the world. There’s nothing he can do to lose their support.

But his base is a tiny fraction of the entire voting public. So enough with the, his base won’t care shit. We know, we know now move on middle America cares the people who are struggling to pay for their prescription drugs. They care the fact that the epi pens that I have to buy for my kids each year cost me more than the billionaire president paid in taxes. I care people who have to buy that care. People who pay their taxes care. This is a kitchen table issue. And right now in kitchen tables across the country, Americans are sitting there with a stack of bills, trying to figure out how they’re going to pay him in the middle of a pandemic when 40 million people lost their jobs or how they’re going to pay them. Even if they didn’t lose their job. After 40 years of wage stagnation in the United States.

Meanwhile, they look at this billionaire, see that he’s not paying a dime and yet pisses them off. Just like when they hear the stories about Jeff Bezos and Amazon not paying taxes, or they hear about other billionaires and millionaires, not having to pay taxes, it’s not just Donald Trump. And they know that they’re starting to put the pieces together. And that’s what we’ve been waiting for. Will it affect the 2020 election possibly too soon to tell we don’t know exactly how this story is going to resonate with people, but I’m sure spending $70,000 and writing off $70,000 to get your hair done for the apprentice. Yeah. That’s not something the average person can relate to the people who go to the mag rallies though. You’re right. They’re not going to care. And none of us should care. What they care about. It is a tiny, tiny fraction of the voting public, but we have a real issue here.

We have a real issue with the president, not paying taxes. We have real serious questions about the president owing more than $300 million to some mystery entity that we don’t know who it is, but he’s going to have to pay it back at according to his taxes. He loses money every year. So he doesn’t really doesn’t have it yet. How are you going to pay, you know, your three, $400 million loans to God knows who, when you keep telling the IRS, you don’t have any money. And that’s where we get into the legal issue. Because again, right now everybody’s like, Oh, it’s just tax avoidance. It’s legal, totally legal. Not quite folks. You see if he is reporting nothing but losses in his taxes, which he, he is. We know that now that’s, that’s a fact. You can’t argue that it’s a fact from these tax documents.

So if he’s reporting to the IRS, nothing but loss after loss, after loss, after loss, even the, of millions I made from the apprentice, you know, I reinvested it back in my business that my business lost it all. So I got nothing, which is what he did according to the documents. So if, if all of this is true, if what he reported to the IRS is true, then how do we square that with the fact that he went to the banks and said, I’m so rich, you can lend me money. You got nothing to worry about because if that’s what he did, that’s bank fraud, wire fraud, that’s all kinds of fraud. That’s lots of different frauds, all rolled into one and that’s illegal. Oh. And by the way, that’s exactly what he’s being investigated for in the state of New York. This is more evidence, or this is actually part of the evidence that a New York attorney general has been waiting for.

Leticia. James has been trying to get her hands on this stuff. Siva aunts in Manhattan, been trying to get his hands on this stuff along with other financial records. And now they kind of have a lot of clearance to take this report to the courts, which happens all the time. Folks happens all the time. Don’t think that, Oh, well, it’s a newspaper. You can’t use that in court. No, no, no, no, no. You absolutely can. And it happens constantly. A report will come out. Some kind of investigation, leaked documents like this, and it will be taken to a judge and said, listen, here is now what we know. This is relevant to us. You have to let us get these documents happens constantly. This doesn’t end well for Trump. Maybe it doesn’t have an impact on the 2020 election. Maybe people actually don’t care. Maybe I’m totally wrong about that.

But the prosecutors care, the investigators care, the courts are going to care. And that is where it is going to have the biggest impact on Donald Trump. We know he’s lied to the public about how much money he has. We know that he has told us he makes so much money each year, hundreds and hundreds and hundreds of millions. We know he reported to other countries too, in these documents that he made a lot of money, but then he told the U S government that he didn’t make any money. So suppose he didn’t lie to the banks. And he did tell them same thing. He told the IRS. Okay. But these documents also indicate that if you pay taxes in other countries, that means you weren’t losing as much money as you said you were. So then that would be tax fraud. I think, no matter which way you slice it, you’re going to find some kind of criminal activity within these tax returns. And now that we have a fairly good understanding of what’s in there, I think the prosecutors in New York are probably wrapping this issue of the New York times up in a little bow, taking it to the judge saying, hi, we’d like to ask a favor.