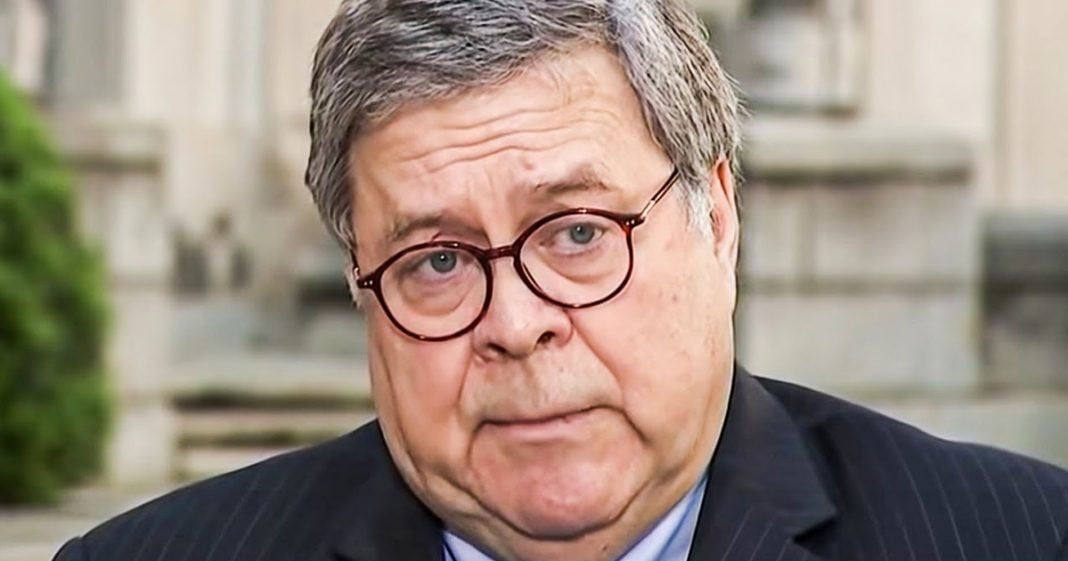 Attorney General William Barr has been given the task of “defunding” liberal cities across the country, and this week Trump announced that these cities had officially been designated as “anarchist” zones. Barr will now begin the task of cutting their funding, which ironically means that Trump is the on defunding the police. So far, his talking points about lawlessness and chaos have not resonated with the public, but his actions here are absolutely going to get people to notice, and not in a good way. Ring of Fire’s Farron Cousins explains what’s happening.

This week, Donald Trump and attorney general, William Barr finally decided to do something about the nonstop violence and chaos that has gripped the United States, every single place across this country. Right? That’s what they want you to think. The truth is William Barr and Donald Trump finally got together and came up with a plan that they think is going to brainwash enough, stupid people to make them think that they’re somehow protecting them. But what they’re really doing ironically is defunding the police. The very thing that they’re mocking the left for saying we should do. Here’s what it is. Obviously everybody remembers two weeks ago, Donald Trump said he was going to have William Barr take a look at several cities, including New York city, Chicago, Portland, Minneapolis, I believe it was, uh, and find out what he could do to defund those cities.

Well, sweet William Barr came out and he’s like, I got it. Here’s what we’re going to do. We’re in cut the funding from the DOJ, But that’s actually, that’s actually law enforcement. And according to William Barr, are they going to do this? Because he said he he’s just become lawless. They’ve allowed their citizens to go out there and damage properties. First thing he said, they’re damaging property. Oh, There’s reckless and chaos. Which by the way, if you’ve been following anything online regarding any of this, people are posting videos and pictures all the time of the cities showing that there’s literally nothing happening. Like there’s just people walking about going to work about their daily routine. There’s no chaos. It doesn’t actually exist. Now. I’m not saying there’s not some shit going down in Portland because yeah, there is

Outside that it’s really not what this administration says. It is. And that’s the whole point of this. Yes. Bill BARR came out and declared. These anarchist areas said innocent people’s lives are in danger, but folks that’s not actually happening. He is doing this to create a narrative of fear that they believe is going to send people rushing to the polls, to give them a second term, telling them, look how horrible this country is. This is what it’ll be like under Joe Biden. So vote for me, the current guy who it’s like under him and somehow all this goes away. Not going to work. I mean, but okay. And here’s the thing we know it’s not working. The polls have not shifted in Trump’s favors. Uh, voters do not say that this is an issue they’re concerned about. Uh, it’s it’s, COVID still COVID is still the number one thing.

The economy is right next to it. It’s not violence in the streets of America. Sure. There are people. And I’ve actually talked to some of them from Alabama, by the way, uh, sorry to insult anybody there, but they’re from Alabama. They did talk like that. I’m sorry. My relatives are from there. And they speak like that. I’m not saying that to offend them. Nevertheless, uh, I’ve talked to people from Alabama who do believe that any minute, now, these hordes are gonna come marching down their street, but those are people in a red state that are gonna vote for Trump. Anyway, they’re Trump supporters who believe this. I have not met people anywhere where I live. And this is a red area who think this or who even talk about it. Here’s the thing. My wife, my wife didn’t even know that there were protests taking place in this country all summer.

She didn’t know. And that’s not because she stupid it’s because she’s not a news consumer, right? We don’t have a cable. We don’t have satellite anymore. So we don’t sit and watch the news. I read the news constantly. She reads books. She lesson plans for her class, but she’s not paying attention to the minutia of day by day things. You know, she gets news alerts on her phone. And so for the average person like her, and that’s what I like to use as kind of the, the standard for this. They honestly don’t know that these things even ever happened. Let alone think that the danger is right around the corner. They just simply aren’t paying enough attention to even care. So Donald Trump and bill Barr’s plan is not resonating with people because they know it’s not true, or they don’t even know what’s happening anywhere.

So this plan to cut funding to these cities, not only is it illegal by the way courts have already said he can’t cut funding for certain cities. Cause he’s pissed at them. Politically, this will fail in court and nothing’s going to happen. So don’t worry about that. But too, it’s just going to piss off more people saying, Holy crap, this fascist is really trying to do it. Trump doesn’t win on this issue at all. The last two months have proven that it doesn’t move the needle in his favor. One bit. All it does is get people to realize what a fascist he truly is. And this, the fact that they’re actually trying to go through with it is going to backfire in a way that could easily tank what’s left of his campaign.