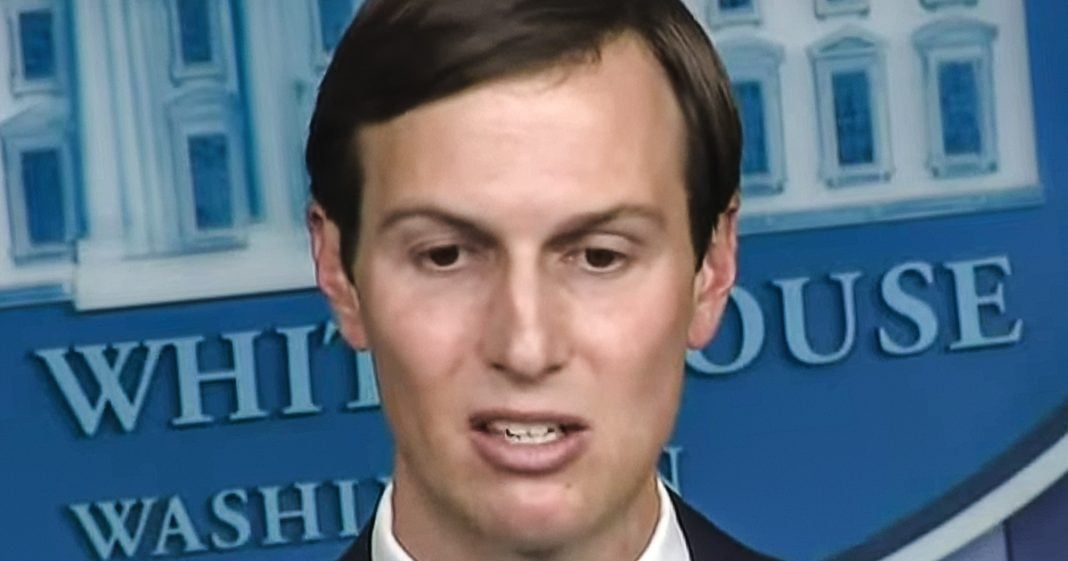 According to a whistleblower from within the Trump administration, the COVID response team being run by Jared Kushner was told to lie and alter data in order to make the pandemic seem less deadly and far less serious than it actually was. We have now heard far too many reports of the administration downplaying the threats that American citizens were facing, and it is beyond time for these thugs to be brought to consequence for their actions. Ring of Fire’s Farron Cousins discusses this.

This week with an interview for the new Yorker, a whistleblower who served on Jared Kushner’s shadow task force, uh, for the pandemic response says that Kushner actively told members of the response team to alter data on how many people had died in the United States from COVID-19. This one Blower happens to be a grandson of a former attorney general Robert F. Kennedy. Um, though in the article, they don’t actually mention the name. They saved Kennedy and that he was the grandson, but nonetheless, a blower who was a member of the task force, by the way, they were actually put on the procurement Team. Okay. And what they said about the procurement team was just as terrifying as what they said about the altering of the data. Um, cause they said that their procurement team was all a bunch of young people, you know, roughly all of them in their twenties.

And when he put them all together, they assumed they were the support staff to more experienced people who knew how to go about pure procuring medical equipment. But Nope, they were, the team described it as Lord of the flies style, anarchy, chaos. None of them knew what they were doing. It was absolute, utter insanity, and it became quite brutal too. So that’s why that’s one of the reasons why we saw such a shoddy response from the federal government in responding to this because Jared Kushner’s tax task force, as we’ve reported, they were in charge of kind of confiscating supplies that hospitals were ordering. You know, hospitals were able to get their hands on masks and ventilators and things like that. And the shipments would come in and they would immediately, before they could be unloaded, be intercepted by the federal agents, federal agents would then take all the equipment. Uh, FEMA under Kushner’s direction would redistribute it.

And nobody quite knows where it would go after that, please That needed it. Didn’t get it places that didn’t quite need. It got more of it like down here in the state of Florida, we receive far more equipment than we needed at the time because our governor was a Trump lover places like New York, where you had a, obviously not Trump lover as governor, they got kind of star for equipment. And then Kushner came along according to the whistleblower and told them to lie to actually physically alter the data about how many people had died from this disease. There has to be prosecutions. And I know it’s not going to happen during this administration. Um, I’m reluctant to think it’s going to happen. Even if Democrats sweep the house, the Senate and the white house after November, but it has to happen. People died because of this kind of negligence. People died because of this arrogance and people died because of these lies.

Even if you’re not going to throw somebody in jail for it, we still need to know what happened and who to blame. So that way they don’t get to just leave Washington D C and go about their lives and live happily ever after they get to live with the guilt and the shame of knowing that every person they pass on the street knows that they helped kill quarter of a million Americans. I don’t want Jared Kushner to ever have a good night’s sleep again. I want him to be haunted by the voices of the dead. I want every time for him to step out of his house. Anytime he walks down the street, I want him to be met with the glares of people who know what he did. Anytime he tries to attend a party. I want him to have to sit solidly by himself in a corner because nobody is willing to associate with him because he is negligent of all the homicide or I guess the better way to say that the proper way to say that would be he’s guilty of negligent homicide, but I want him to feel it every second of every day for the rest of his life, he can live to a ripe old age.

That would be great. Same thing with Ivanka, same thing with every other person who was a part of this administration’s response to that. This I want people to know, and the people have a right to know, not because we want to do something to them, but because we want to make sure these people are shunned for the rest of their lives. That that’s the point. Punishment these people deserve because the one thing they crave more than anything is power and attention. And if we starve them for, uh, from that, that’s almost worse than putting them in jail because psychologically that is what’s going to hurt them far worse than any punishment from the legal system.