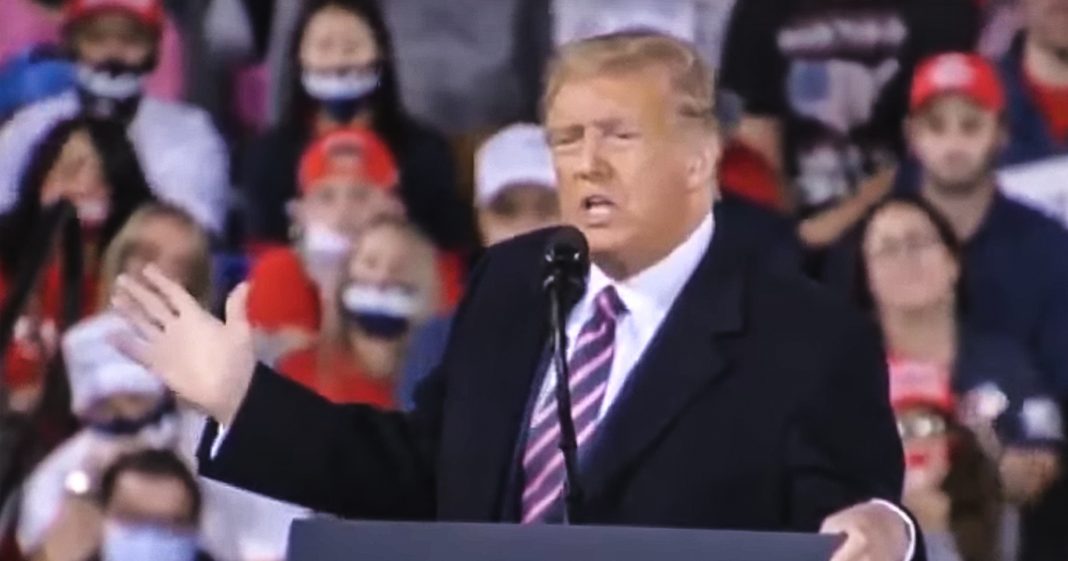 The CDC came out this week and proclaimed that the coronavirus can be spread through droplets in the air. They came out a few hours later and pretended that they never made those statements. This is because it runs contradictory to what Trump has been telling the public for months throughout this pandemic, and even as the country surpassed 200,000 COVID deaths, the CDC was more than willing to lie to make Trump look better. Ring of Fire’s Farron Cousins discusses this.

On Monday night of this week, Donald Trump held a rally where during the rally, he said that virtually nobody virtually nobody, the exact words out of his mouth was effected by COVID-19. You know, the disease that the coronavirus causes virtually nobody’s affected here in the United States. He said a quote, uh, it affects elderly people, elderly people with heart problems and other problems, but it affects virtually nobody. It’s an amazing thing. The very next day, by the way, U S surpass 200,000 deaths from COVID-19. Now I’m bringing that up and that’s not even the focal point here, because also on Monday you had the centers for disease control and prevention come out and finally explicitly say, guess what, folks, we have determined that yes, the Corona virus can in fact be spread through droplets in the air. Uh, and it travels much further than six feet.

Scientists had already let us know that a long time ago, by the way, I don’t know if you’ve been paying close attention, but I’ve mentioned the six feet thing they’ve actually said, it’s more like 13 feet. I was saying that months ago, because that is what they said, because it does travel more than six feet. Um, and so the CDC finally got with the science and said, okay, listen, yeah, we’re going to officially make it our stance. We’re going to put this out there. Yes, it’s in the droplets. So when you’re talking spits, coming out, that can have coronavirus in it. If you have it, obviously. And yeah, those little droplets, depending on the size, they can travel more than six feet. So, you know, I guess make adjustments based on that. And the biggest adjustment obviously is where the mask, the mask for the most part stops, the droplets stops them from coming out of your mouth and going out into the air and from coming into your mouth, if they’re in the air, that’s why master great.

Next day, Donald Trump had the rally, a M actually mocked Joe Biden for wearing mass. He made fun of people wearing masks. So he downplayed the mask risk. And also that same day, the CDC miraculously came out and said, no, no, all those things we just said, we don’t, we’re not, we’re not saying that anymore. We don’t say it. So what happened, what happened was simple. The CDC came out and followed the science that we’ve actually already known about for a couple months now. And they adopted it. They said, yes. Okay. This is what science tells us. So obviously we’re a scientific organization. We adopt this as well, but it didn’t jive with what the president’s been telling people. It didn’t jive with him making fun of people where in mass, it didn’t jive with him holding very compact indoor rallies with mostly masculine people. The only people at those rallies, by the way, wearing masks are the ones they put up behind him.

So the rest of the country thinks they’re being responsible. But when you look at photographs or video of the people out in the crowd, no masks, none. These are super spreader events and the CDC knows it, but they have censored themselves because they pissed off Donald Trump. Now whether Trump Expro expressly told them to retract it, or whether they retracted it because others in the administration said, you’ve pissed him off. We don’t know one of those things did happen though. And so here’s what else needs to happen. There have to be massive, massive investigations. Once this man leaves office, we have to find out who did what we have to find out why the science of all of this suddenly became politicized because that is what he’s doing. He is trying to weaponize silence a science by silencing it. That’s what he’s doing. He is downplaying playing it. He is hiding it from the rest of us because it doesn’t fit with his agenda. And it doesn’t match anything that he has said since the beginning of it, what the CDC said originally this week was correct. Their retraction of it is what was incorrect. All of the independent and government funded science on the subject shows us that we have to go with what they first said, not their retraction after they learned that they pissed off the man who doesn’t even know what science is.