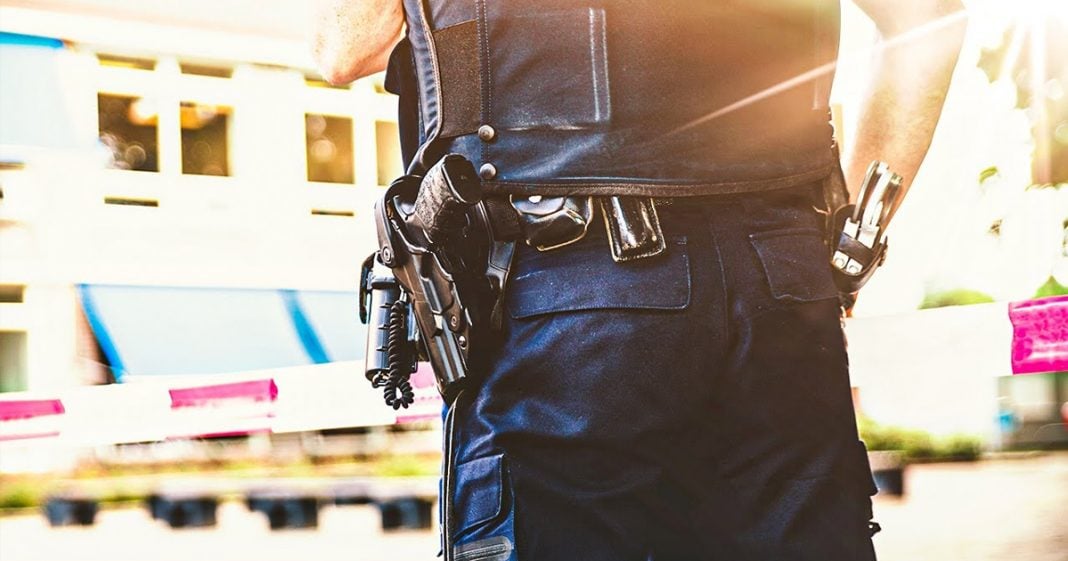 According to reports, police officers in Williamson County, Texas were allegedly “rewarded” with gift cards when they would use excessive force against suspects or detainees. This is how ingrained this practice is with our police forces – not only is it condoned, but it is REWARDED. Ring of Fire’s Farron Cousins explains how this story is emblematic of all the problems we see with cops around the country.

According to a former Texas police officer in Williamson County, Texas, his County, his precinct would actually reward officers for use of force with gift cards. So if the police officer went out, had to use force on a suspect or detainee or whoever it is, but they had to use force. They would come back to the station. You fill out their report and their superior. If, if of course they believed it was a good use of force would then reward them with a gift card to a steakhouse. So they actually incentivized these officers to use violence against the people on the streets. And this is Williamson County police force a is a police force, by the way, that has come under intense scrutiny over the years for murdering unarmed minority suspects. And in fact, some of the people that murdered unarmed suspects did. In fact, according to this, a former officer perceived gift cards to steakhouse.

So your life to these officers is worth less than a free bloomin’ onion from Outback. That is essentially what we’re dealing with with police officers here. This a report from this former officer was actually also later on corroborated by other former members of the Williamson County, Texas police force. So other officers have come forward and said, yes, this is what happened. Of course they all said, if it was, if it was good use of force, you know, the superior had to determine, was it a bad use of force or was it a good use of force? Here’s the thing, folks, there is no such thing as a good use of force. They’re really in truly isn’t. If these officers had done their jobs properly, if they were trained properly, if the United States rethought how we did policing here in the United States, if we revamped it use of force, would rarely if ever be necessary too many times, we have seen a mentally ill individual, somebody going through a psychotic break, somebody on drugs, somebody drunk out of their mind, who doesn’t even understand what they’re doing killed by police officers.

Some of these folks, they never even realized the situation. Some of the mentally ill folks. It’s not that they were committing crimes. It’s just that people understood there’s somebody out here acting weird. So police would show up and one thing would lead to another because the person didn’t understand and they’d end up dead. We we’ve seen reports of that in the last month. Police officers armed with guns, shouldn’t be responding to those kinds of things. No, and that’s why we, we have the problems that we do. We also have the problems that we do because as this officer said, uh, they had the intention that we were all Wilco bad-ass. And if you went out there and did your job and you had to use force on somebody and he agreed with it, then you would get a gift card. That bad-ass mentality.

That is the other part of the problem. That’s the part of the problem that I believe does not get addressed enough. You have these want to be Rambo police officers, who all think they’re out there being Robocop. That think the only way they can compensate for the lack of what’s in their pants is to take somebody else’s life. They are missing something inside of them or something on them that makes them feel inadequate. That makes them feel insecure. But holding that gun in their hand or taking somebody else’s life or taking somebody by the neck and squeezing the life out of them, that is the only thing that can make these beta males feel like they’re men for a few moments. That’s the problem with the police force? Not just that it attracts people who feel that way. These are people that need counseling, not guns and badges. So it’s not just that it attracts those people. What’s that it fosters that environment. It breeds it into people who may not have that feeling. It rewards it as this story proves. And until we get to the heart of that, until we reform that until we abolish that, then stories like this are not going to be weird outlier stories. They’re going to continue to be the norm.