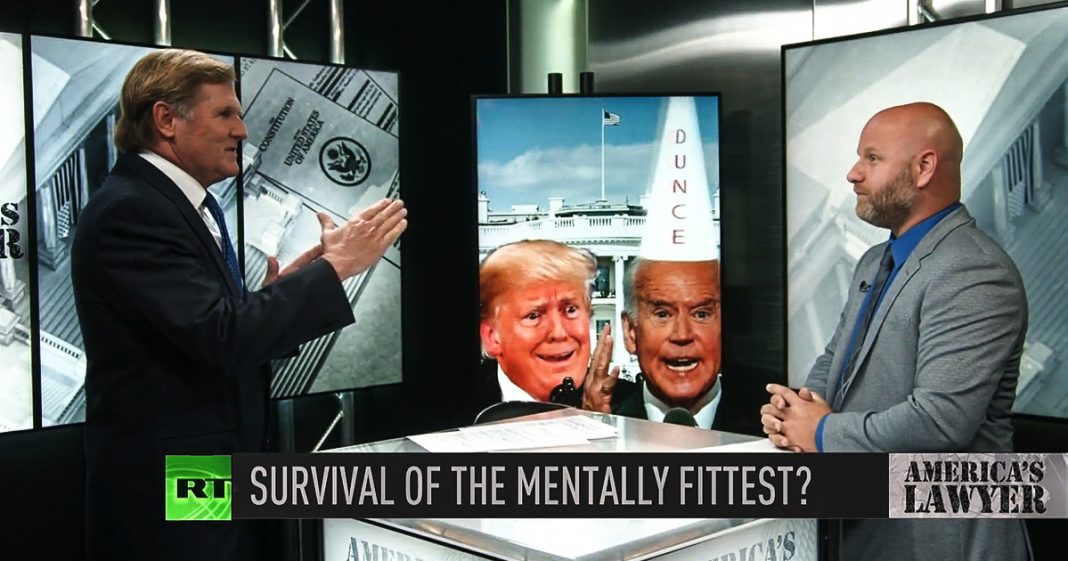 Via America’s Lawyer: A new poll finds more than half of Americans find both Trump and Biden “mentally unfit” for the presidency. Mike Papantonio & Farron Cousins to discuss more.

Mike Papantonio:             A new poll shows that swing state voters think both Trump and Biden are not mentally stable enough to be president. Whoa. You know, this, this wouldn’t bother me so much if it wasn’t just one poll, that we’re seeing edges of this poll, talk about that. I mean, they’re really talking about that most voters think that both of them are mentally unfit to be president. Out of 300, 300 million people, this is the best we can do.

Farron Cousins:                  Right. That’s, that to me was the most shocking part of this, you know, out of everybody that could have run for president out of all the Democrats that were running during the primary, we ended up with two people who, most voters, Republican and Democrats look at both of them and say, neither one of these guys is there. They’re not there enough to hold this job. Now they do think Biden is physically fit enough. But that doesn’t mean anything. Okay. The guy’s not gonna collapse, but is he competent enough to do the job? And 52% say no, 51% say no for Trump.

Mike Papantonio:             Farron, I think with the story that I saw, there was also something that was startling. It was that voters had an opinion that, that the, the, basically the election wasn’t going to be fair. And that even if they thought, even if they didn’t favor Trump, they said it doesn’t make any difference. Trump’s going to win.

Mike Papantonio:             Well, what is your take on it? I mean, it’s pretty startling. They said, no, I don’t want Trump, but I think he’s going to win. And that has something to do with what we call the secret voter, doesn’t it?

Farron Cousins:                  Right. And that is really interesting. And what the secret voter is, is the person who may be ashamed of who they’re voting for. So when they get polled, they say, oh, no, no, no, no. I’m going to vote for Joe Biden, but really it’s a Trump voter. They’re not doing it to be sneaky. It’s because personally they feel ashamed. And honestly, I think we do see a lot of that, and this is anecdotal, but we’re in the panhandle an exceptionally red part of the state.

Mike Papantonio:             Okay. But think about this now, this is how these two things tie up. You’re on the phone, you’re talking to somebody doing polling. Okay. You’re, you don’t want to say, hey, I’m going to vote for Trump. You’re saying, no, I don’t, I’m, you know, I’m a Biden guy. But in back of your mind, the reason you’re saying, I think Trump is going to win anyway, is because you’re thinking, well, I’m not really saying it. I’m not really telling the truth here. I, you know, I’m going to go to the polls and do what I want to do. Farron Cousins, thank you for joining me. Okay.