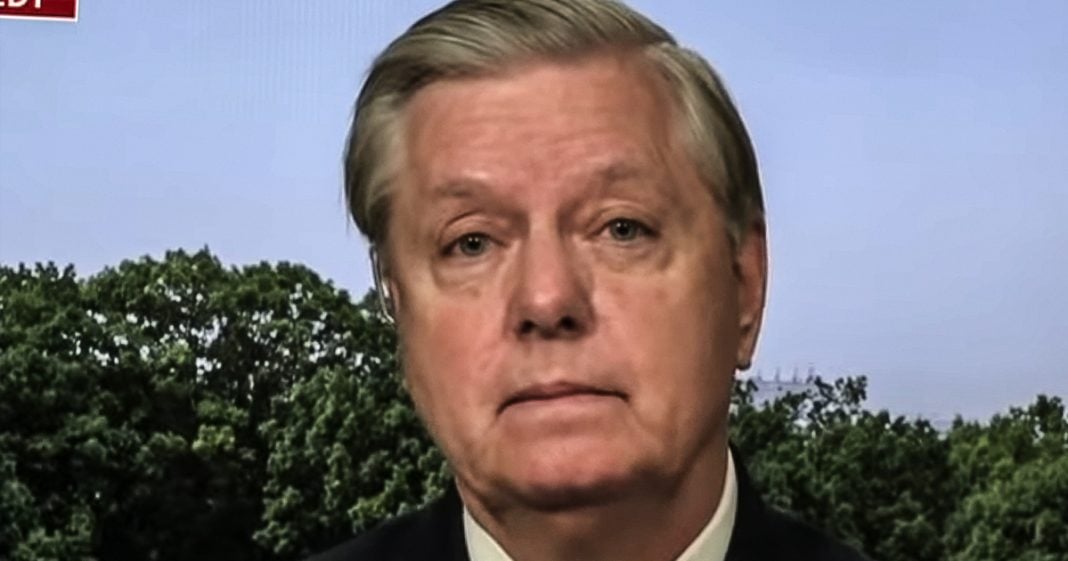 Republican Senator Lindsey Graham appeared on Fox News this week to whine about the fact that his opponent, Jaime Harrison, is outraising him and that Graham himself is getting killed financially. He then lamented that all of this money is flowing to Harrison because people hate Graham’s guts, a statement that is actually pretty accurate. Ring of Fire’s Farron Cousins explains what’s happening and whether it will matter in the long run.

This week, Republican Senator Lindsey Graham, who is locked in a heated battle to retain his Senate seat in South Carolina, he went on Fox news on Fox and friends Thursday morning to whine about the fact that one he’s getting financially slaughtered by his opponent, Jamie Harrison, and two, everybody hates him. They just hate poor Lindsey Graham, who apparently has done nothing wrong, nothing to deserve this universal hatred that he has received from across the country. Uh, take a look at Lindsey Graham whining to Fox news about one losing the money race, and two being universally hated. Here it is.

Lindsey Graham: My opponent will raise almost a hundred million dollars Ainsley in the state of South Carolina. The most money ever spent in the history of the state on a Senate race was by me in 2014 when I spent 13 million. He raised $6 million from the time justice Ginsburg passed away within 72 hours. And God bless justice Ginsburg. We’re celebrating her life. I appreciate waiting to Saturday to announce the replacement, but I’m being killed financially. This money is cause they hate my guts.

They I hate my guts. They hate my guts. Uh, you know, it reminds me of another Southern Senator who everybody pretty much hated his guts. And he was getting outraged by his opponent tremendously. That man was Ted Cruz just two short years ago when Beto O’Rourke seemed like he was going to come along and absolutely in the national nightmare, that is Ted Cruz. Having a holding federal office came close, man, raised money from all over the country. People that even couldn’t even vote in the Texas race, sending Beto O’Rourke money. And we all know how that story turned out. And unfortunately, I think that is what we’re looking at right now with Jamie Harrison. Now, Jamie Harrison is going to do what Beto O’Rourke did show the country that this red red seat, it actually is red as we think it is that it could budge. I mean, he’s already shown that right now, even without all of this out of state money that is flowing in because yes, folks, that is where the money is coming from.

Mostly he did raise millions of dollars in the 72 hours after Ginsburg’s passing that didn’t come from South Carolina, that didn’t, that came from all over the country. People saying, I want Lindsey Graham gone and it’s great. It helps Harrison. But at the same time, it results in stories like this that give people a false sense of hope. And I hate to be the hope killer. I don’t like being a dream killer, but let’s be realistic folks. Lindsey Graham is going to come close to losing his seat this year. But Lindsey Graham is going to retain his seat this year. I think that’s a sad reality, but I think we all have to live in reality. It’s not always flattering. It’s not always fun. It’s not always what we want it to be, but it’s always the truth. And that is what we always have to remember. I still think we fight like hell, because there is a chance. There is a chance we can take Lindsey Graham seat.

I just don’t know that we’re there yet. Jamie Harrison’s good candidate. I hope he pulls this off. I would love to see him sitting in the U S Senate. I would love to see Lindsey Graham forced to retire before he wants to. Lindsey Graham is a corrupt, absolutely disgusting, pathetic little weasel. Who’s never done anything good throughout his entire career. He hasn’t done anything for South Carolina. Why is he even still there? How are these people in South Carolina able to be hoodwinked time after time into keeping Lindsey Graham in the Senate when he’s not doing anything for them, those are questions for which I do not have an answer. I would love to have one. I wish I could give you one, but unfortunately I can’t fight like hell, you know, uh, do what we can to continue showing people, telling people, reminding people how horrible Lindsey Graham is. That’s where we really have a shot. But Lindsey Graham is probably going to turn this around and use it as a positive. That’s why he went on Fox news and said all that, because now he’s going to start running ads. I guarantee you these Hollywood liberals out in California, sending money to my opponent.

And we may think that’s silly, but trust me as somebody who lives down here in the South, I get to see the perspective of it. Shit like that works as stupid as it sounds seriously, folks spend some time in the South and you’ll start to understand, get out of your bubble. I’ve spent plenty of time in blue States and things are totally different. Their, the way they run their campaigns in blue States is totally different from what you see down here in red States. So if you’re not down here, if you don’t ever get to experience this, trust me, you’re only seeing half the story of American politics. And that’s why it may seem strange and weird to you about the whole Hollywood liberal thing. Why do people buy into that? Because they do because they’re down here living paycheck to paycheck, and I know blue state people do it too, but trust me, it’s just, it hits different down here.

It hits different. These people have been conditioned their entire lives to blame every ill in their life. On Democrats, not on corporations, not on a federal government run by Republicans that keeps them down. But on Democrats, Democrats who haven’t been empowered in this area in decades, still their fault, somehow it was the Southern strategy folks. That’s what it is. It’s still alive and well today and still impacting politics down here in the South today. And if you haven’t seen it firsthand for yourself, then I don’t think it’s really possible to fully understand what goes on down here. Lindsey Graham is somehow going to use this to his advantage and it’s probably going to work for him, but there still hope. Not just hope that Jamie Harrison can take this seat from Lindsey Graham, but hope that in the future, we can take that seed away for good. We don’t get there unless, and until we understand how politics and political races happen down here in the South, which means Democrats, the democratic establishment. You have to finally wrap your heads around the Southern strategy and figure out a way to counter it. You’ve been letting this go for 40, 50, 60 years. Almost the South is not a lost cause. These people are in fact reachable. Some of them, some of them aren’t obviously just like there’s plenty of blue States where Republicans could make inroads

Country is shifting all the time. Demographics are shifting all the time. Just like they are down here in the South in roads could be made by Democrats. If they’re smart, if they know what they’re doing, and if they know who to tell to back the hell off, because there are groups, the Hollywood types, trust me, I have no problem with them being political. My neighbor does. And he is a hardcore spread and Q Anon shit on his Facebook page type. So yeah, things like that do way in the minds of them. But if you can say, Hey, listen, Hollywood, that’s really cool. And all we don’t, we don’t need you to like be involved in this, not in this race. Maybe, maybe go over and do this one, maybe get your ducks in a row democratic party. And in that future week, you can win seats like Lindsey Graham’s. But until we do that until we can finally figure out a good way to counter that Southern strategy, it’s going to be an endless cycle of getting our hopes way, way, way up. Only for them to be crushed by these horrible Republicans who should have been kicked out of the Senate years ago.