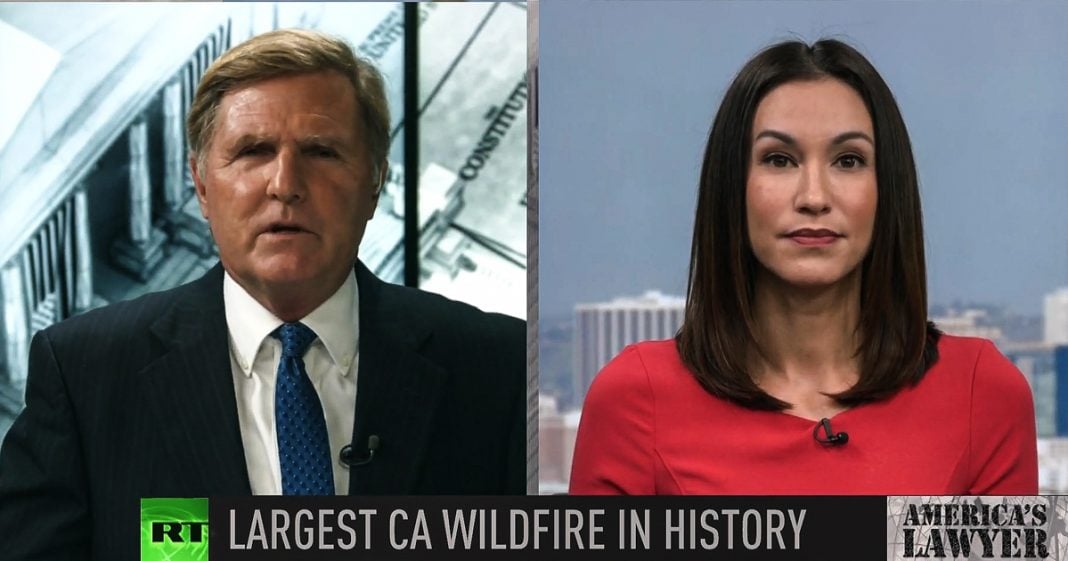 Via America’s Lawyer:  RT Correspondent Brigida Santos joins Mike Papantonio to discuss the worst-ever wildfire season in CA, which is still ablaze and quickly spreading to other states along the West Coast.

Mike Papantonio:             Massive wildfires continue to burn across California including the largest in the state history. Brigida Santos, who is out there living through all this, joins me now to talk about the details. Brigida, what’s, what’s the status of, of California’s major active fires? I, it’s almost like the plagues have been unleashed in California. You’ve got, you’ve got blackouts. You’ve got the COVID virus. You got heat waves never seen before. You’ve got these apocalyptic fires taking place and you have an Exodus. People are actually leaving California now. What’s going on, man? What, what’s, what’s the story behind the story here?

Brigida Santos:                   Yeah, it’s absolutely crazy. Fires get worse every single year and unfortunately we’re getting a little bit too used to it. Now the largest wildfire in California history is currently burning across several counties in the Northern part of the state, including Mendocino, Trinity and Humboldt. The August complex fire, which combined several lightening complexes into one giant fire, has consumed nearly 1 million acres of land since beginning over a month ago. As of Tuesday, it stands at 43% containment. Now down here in Southern California, the Bobcat fire has now become the fifth largest in state history. It’s currently tearing through the Angeles national forest, just East of the studio here. And it’s torched more than 106,000 acres in the past two weeks. It stands at 17% containment. While wildfires have ramped up over the summer, this year has been particularly bad overall in California. Since January nearly 8,000 wildfires have destroyed more than 3.5 million acres of land in the state. In comparison, Mike, by this time last year, just 56,000 acres had been consumed in wildfires.

Mike Papantonio:             You know, fires are also tearing through other parts of the Pacific Northwest. What can you tell me about, say Oregon is, is a place I’m seeing that, you know, you’d see it every now and then, but really it’s lighting up in a big way right now in Oregon. What’s your take on that?

Brigida Santos:                   Yeah. Look, this week, at least 80 major fires are burning across a dozen Western States. Some of the most destructive fires though have burned in Oregon where six men have been accused of arson. Now none of these alleged arsonists are suspected of starting fires for political reasons as claimed in widespread online rumors. Those were false. Instead all of the men reportedly suffer from substance abuse, homelessness, or mental illness. Now most of those fires were smaller. They were put out quickly. However, one of them damaged over a dozen homes and merged with a bigger deadly fire. In that case, the suspect has been charged with crimes. The other suspected cases are still under investigation.

Mike Papantonio:             Hmm, well, Brigida, what, what agencies are managing California’s forests and how can, I mean, there’s all this discussion, you know, need to do cut, they need to do under cutting and they need to take care of some of the dead wood that’s out there. Is there truth to that? Or is that just a talking point that we’re seeing emerging for political reasons?

Brigida Santos:                   Of course, there’s a little bit of truth to that, but a lot of this has to do with the federal government and the state government here not cooperating properly when it comes to managing the forest fires. Now the federal government owns and controls 57% of California’s 33 million acres of forests and the federal agencies that oversee the state’s forests include the Bureau of land management, the national parks service and the US forest service, meanwhile, state and local agencies, including Cal fire, park and water districts and land trusts own just 3%. The rest is owned by private families, native American tribes or industrial timber companies. Now in August, governor Gavin Newsom did establish a longterm strategy between the state of California and federal forest managers to reduce wildfire risks, protect the environment and restore watersheds. It outlines key actions to improve cooperation between the state and federal government. And president Trump has just signed the great American outdoors act, which will provide critical funding for the forest services work in California and elsewhere. So hopefully that cooperation is going to improve things, but we’ll have to wait and see.

Mike Papantonio:             Talking point that I hear most is it’s the new normal. It is climate change that’s involved, the media won’t report on it. Every time they do the story, the headline should be climate change. They’re not doing that, but unfortunately that is the reality. It is the new normal, apparently the new normal from here on out. Stay safe out there, Brigida, and thank you for joining me. Okay.