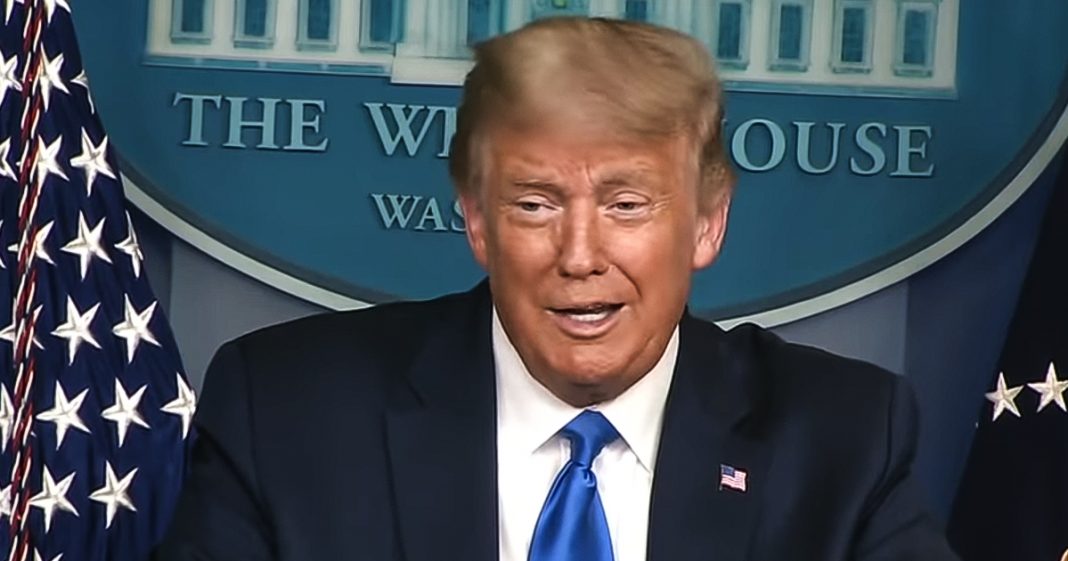 We have no idea how the 2020 election will ultimately conclude, but we do know one thing for certain: Trump will never accept the results. Even if he wins, as fellow Progressive talker David Pakman pointed out, he will continue to say that the margins were wrong and that he won by much more than we know, just like he says about the 2020 Presidential election. Ring of Fire’s Farron Cousins discusses this.

Obviously one of the biggest stories of this week is Donald Trump’s refusal during a press conference earlier this week to commit to a peaceful transfer of power, something that he has repeatedly hinted at, essentially since the very beginning of his administration, talking about staying in office longer, uh, maybe they’re not gonna, you know, be nice. Maybe they’re not going to let it happen. Maybe there’s going to be election interference. But I think overall, the thing we all have to accept is the fact that no matter what happens in November, Donald Trump has never going to accept the results of this election as our good friend and fellow progressive talker, David Pakman pointed out, he’s not even going to accept the results of the election if he wins, because he didn’t even knew that in 2016, here’s what Pakman tweeted. He said, Trump still hasn’t accepted the 2016 popular vote results in an election.

He won, of course he won’t accept results. That show Biden winning. Um, David is 100% spot on with us and that’s something we all have to come to grips with. Um, aside from the obvious tyrannical facts that we’re having to deal with with his administer or excuse me, his campaign saying that they have a contingency plan to help rig the election. That’s terrifying. We should be worried about that, but we also have to deal with the somewhat comical portion of this administration. And that is the fact that we’re going to hear for the rest of Donald Trump’s life, how unfair this election was. Even if he wins, we’re still hearing about the nonexistent three to 5 million, uh, voters who voted in 2016, but they were not allowed to vote. They were illegal voters. Some of them illegal immigrants voting and his base actually actually buys that crap.

They actually think he’s telling the truth. What he’s doing is trying to Sue his very fragile ego because he lost the popular vote by 3 million votes. And that’s what’s going to happen this year. Even if he wins, he’s going to claim that he won by an even larger margin than what the actual vote show. He’s going to claim that a certain percentage of Joe Biden’s votes, whether Trump wins or loses, he’s going to say a portion of Biden’s votes, all illegals. How many millions is it going to be? Well, we’ll have to wait till after the election to see, you know, how many people voted twice for Joe Biden. We’ll have to wait till after the election to see what kind of number Trump cooks up in his own head about that. So in the inconsequential terms of Trump not accepting the results of the election, he’s never going to accept the results of the election in his head.

He’s going to win by like 800 million votes. And that’s only a slight exaggeration. I’m not kidding in his, he is 100% going to think that he won. I genuinely believe that he genuinely believed that he won the popular or vote in 2016. There were just several million illegal voters. I, I truly believe that he truly believes that at first it may have started off as a lie, but it’s one of those things where he personally said it so many times that even his own brain started thinking, you know what? That’s probably right. I’ve heard this guy say it so many times. That has to be what, and that’s not what happened by the way. Um, you start all the polling we have right now, Joe, Biden’s gonna win the popular vote. Now that could change after Tuesday’s debate hundred percent. I’ve been saying that for months now, but if Joe Biden pulls off a good solid debate performance, Tuesday evening, he’s won the popular vote.

Whether or not he wins. The electoral vote is another story. And that is where the concern comes in. Trump’s plan has a Trump’s plan. Trump’s campaign has the contingency plan. They call it in place to help steal the electoral college vote. Uh, so that’s something to be concerned about, but in terms of not accepting the election results, yeah. We’re going to have to listen to Donald Trump bitch about what happened in 2016 and 2020, even though it’s completely fabricated, we will be listening to him say that yes, for the rest of his life. Let’s just hope we don’t listen to them bitch about it for four years, serving a second term. One of today’s video sponsors is surf shark VPN. And right now they have an exclusive offer for our ring of fire. Viewers, just go to surf shark.deals/ring of fire, and you can get 83% off of a two year subscription to surf shark VPN plus three months free.

This makes your monthly membership only $2 and 21 cents, which is a phenomenal price for online security. Right now, the internet has not been as insecure as it is. Today is any other point in its history. And it’s only getting more on secure. So you have to do whatever you need to, to protect yourself and using a VPN is absolutely one of the best and most effective ways you can do that. And surf shark has phenomenal features. You could use it on unlimited devices. You can white list, a certain websites that you use on a regular basis. Like your banking website that don’t allow for VPN use. You can use it to go through multiple different countries so you can serve securely and access information that otherwise might be out of reach for you. So again, go to surf shark.deal/ring of fire. You can enter code ring of fire at checkout, or just click the link in the top of the video description below to get 83% off a two year deal, plus three months free of surf shark, VPN.