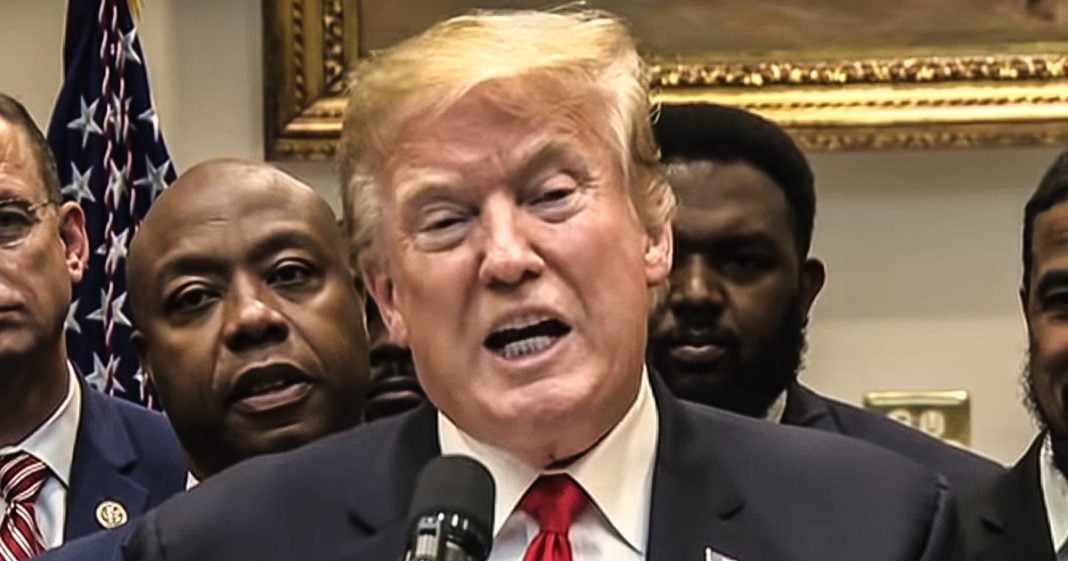 According to a report, Donald Trump was so furious that his First Step Act didn’t improve his poll numbers with African Americans that he screamed at his staff and threw a temper tantrum. The First Step Act was Donald’s way of trying to get black voters on his side, but they weren’t naive enough to think that one piece of legislation undid his entire lifetime of prejudice. Ring of Fire’s Farron Cousins discusses this.

According to a new report from the Washington post back in 2018, when Donald Trump signed the first step act, uh, he later on shortly thereafter became infuriated with his staffers because his poll numbers with African American voters did not improve now. For those of you who are not familiar with it back in 2018, Donald Trump did sign the bipartisan piece of legislation known as the first step act, uh, which sought to kind of overhaul the sentencing process here in the United States and not necessarily the process, but the sentencing itself. Uh, it was actually aimed at reducing recidivism rather than just straight up leaving people in jail, allowing people to get out a little bit earlier, reevaluating how we evaluate people on whether or not they’re likely to repeat. And if they’re not reducing their sentence, letting them out early, things like that, basically reducing the overall prison population.

And, uh, at the time it was widely believed. And so far has kind of proven to be true that this would absolutely help African Americans who are disproportionately, uh, incarcerated in the United States. And that’s why Trump signed it. And he admitted that that’s why he signed it because he thought it was going to help him with African American voters. But then after he signs this legislation, Polston, didn’t change his poll numbers with African Americans, didn’t shoot through the roof. So according to people that were there, he lashed out, he threw an angry temper tantrum and started screaming at his staff, including at the time Amarosa, uh, the, the staffers said that he went quote, went shit house crazy. That was the exact phrase that they use. He went shit house crazy. That’s how they describe president’s demeanor. And then he said, well, why the hell did I do that? That’s another quote. Well, why the hell did I do that? Meaning if he didn’t think it was going to improve his poll numbers with African Americans, he wasn’t going to sign the legislation. He wasn’t going to make the first step act, which again is a good thing. It wouldn’t have become a reality if he didn’t think he could personally gain from it.

He also, according to a staffer said, you’ve been at this for four months Omarosa, but the numbers haven’t budged. So he’s throwing a temper tantrum. He’s screaming at his staff. But again, I think the most important thing is that he wouldn’t have signed this piece of legislation. If he didn’t think he was going to get something in from it, that’s all this man is about the bailout he gave our farmers that’s cause he wanted to buy their votes. The 33 million Americans on Medicare that are getting 200 bucks in the mail it’s because he wants to buy their vote. The first step act it’s cause he wanted to Bly, uh, by black people’s votes, everything he does has an ulterior motive. Nothing that this man has done is even remotely done just for the good of the people. He’s incapable of it. He is physically incapable of doing something good just for the sake of doing something good. The man is pure evil. And I don’t think that that’s an overstatement at this point.