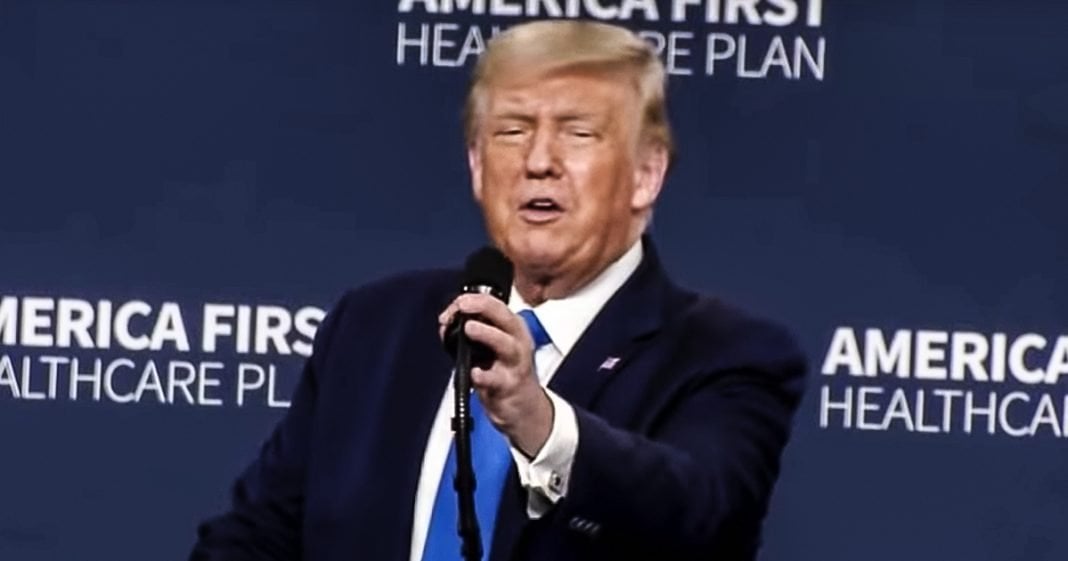 The White House is about to mail out 33 million gift cards to American seniors worth $200 each that are to be used on prescription drugs. The President said that he would be lowering prescription drug prices for people on Medicare, not sending them free government money in order to bribe them right before the election. Ring of Fire’s Farron Cousins explains what’s happening.

Yesterday, white house, press secretary Kayleigh McEnany announced Donald Trump’s plan to bribe elderly voters to vote for him. And this coming November is election. She announced the plan on Twitter and here it is, uh, she said, president, uh, at real Donald Trump delivers for America’s seniors. Soon 33 million Medicare beneficiaries will receive a card in the mail containing $200. They can use towards prescription drug costs. Now to be perfectly honest, this is a good thing for America’s seniors. Let’s not get that wrong. The seniors do need relief for the cost of the prescription drugs they have to take. Uh, but this is straight up bribery. That’s what this is, this isn’t because drug prices suddenly went sky high and suddenly seniors can’t pay for them. No that’s been happening for, for well over a decade. And we’ve known about it. And in fact, Donald Trump in 2016 actually ran on that.

He actually said in 2016, he was going to lower prescription drug prices before he was ever elected president. So he’s known that this has been a problem since, before he was president. So he waits until we’re less than two months away from the election to finally say, all right, I’m going to do something about it. I know I’ve been teasing you every couple of weeks for the last four years saying a healthcare plan is right around the corner and it never shows up. So I’m going to give you each 200 bucks, 33 million seniors, 33 million people on Medicare. Here’s 200 bucks in Donald Trump fund money. Please make sure you vote for me in November. That’s what this is. That is exactly what this is. He’s not doing this because he wants to help American seniors. He’s doing this because he wants senior citizens to vote for him.

Uh, when COVID hit actually right before covert had Donald Trump was absolutely slaying it with the over 65 vote, covert hits. He does nothing. You have Republicans out there left and right saying, well, maybe the elderly just kind of have to take one for the team here. And suddenly by the end of April, Donald Trump had lost 20 points with that over 65 age group. And in fact, they now hate him almost as much as the 18 to 29 year olds. So the youth vote that Donald Trump never had, like that age group has always hated him. The elderly folks are now within the, uh, reach of having those exact same numbers. That’s how bad it is for Donald Trump with elderly Americans. So he does this and he says, Hey, how’s 200 bucks sounds, is that enough for your vote? Is that good enough? It’s just like what he did in 2018 with rural farmers.

Remember that’s when he went ahead and said, Hey, I’m going to bail you all out from my trade war, even though we’re totally winning the trade war, I understand that you’re going bankrupt and you’re losing all your money. So I’m going to bail you out. Billions and billions and billions of dollars thrown at American farmers. I didn’t pan out for him. And I don’t think this will either. I don’t think seniors are going to be duped by $200 in Donald Trump’s fund money. Not to mention the fact that didn’t, he just signed an executive order saying that drug companies had to give a Medicare beneficiaries or most favored nation status for prescription drug prices. Like they couldn’t charge us more than they were charging the country that was paying the least for him. He just signed that order. So if in fact that order was doing what he claimed it would do, we wouldn’t even need these $200 voucher seems to me.

I actually pointed this out at the time, the way he worded that executive order actually gives drug companies, a loophole to not have to give us most favored nation status. If they think it will impact their ability to do R and D, then they don’t have to give us the status. He actually included that in the order because he’s an idiot or because he’s smart and wanted to make sure drug companies didn’t actually have to lower their prices. But the public would think that he did something about lowering the prices. It’s all a shell game folks. It’s all a shell game. And sometimes all you have to do is actually read it. Not even read between the lines, just read the damn thing that comes out and you can see the truth. You can see past what’s actually happening, but unfortunately, too few Americans do that. Most people think Trump signed an executive order to lower prescription drug prices. Most people are going to think Donald Trump is helping America’s seniors pay for drugs. No he’s giving them each 33 million people, a $200 bribe. And the quick math on that $6.6 billion in bribe money from us taxpayers to try to gain a couple more voters over the age of 65. That is what was announced yesterday by Kayleigh McEnany.