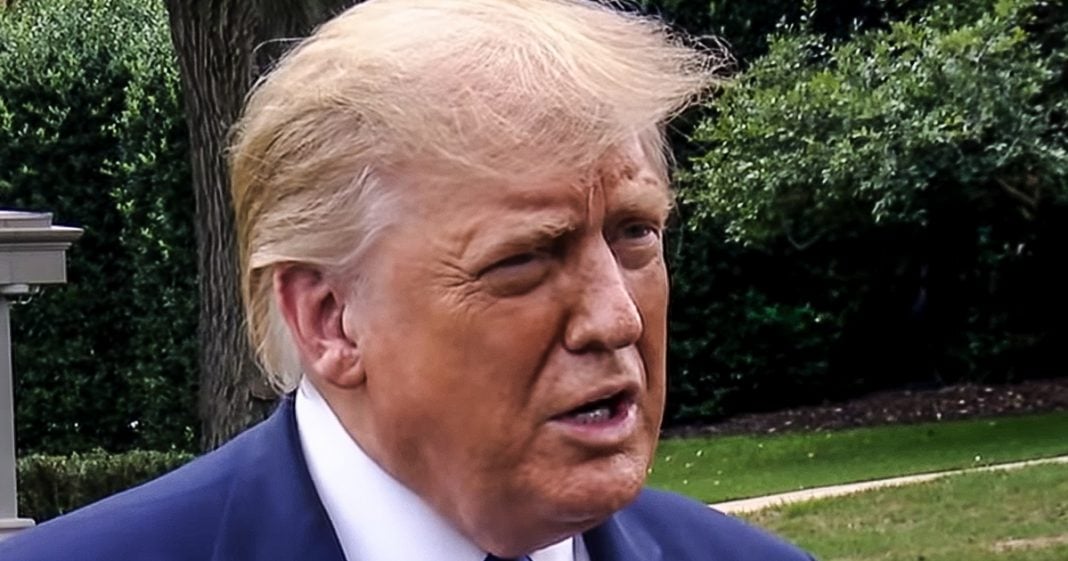 On Thursday, Donald Trump gave a radio interview to Fox Radio where he said that Joe Biden should drop out of the Presidential race because of the Ukraine report that was released this week. The only problem is that the report says there was no wrongdoing by Biden, so its unclear why him being found to have NOT broken the law should be grounds for dismissal. Ring of Fire’s Farron Cousins discusses this.

On Thursday during an interview on Fox radio, uh, Donald Trump actually said the Joe Biden needed to drop out of the presidential race. Like that’s it, Joe Biden has to drop out. So why does the president think Joe Biden should drop out? Well, because the day before the Senate released their damning report on the Bidens and Ukraine, and if you’re, we, you know, if you weren’t paying attention that day about the report, let me tell you what it said. It said there was no evidence that anything the Bidens did actually effected, um, policy towards Ukraine. So yeah, so yeah, the president thinks that Republican saying they couldn’t find any dirt on the Bidens means that Joe should resign because as Donald Trump said, he was quote, he was in on it, Biden was in on it on whatever it is that Hunter Biden was doing in Ukraine.

Even though the report said, Hunter Biden, wasn’t doing anything. They said, the report said it was fuel weird. It was strange. Obviously they’re cashing in on Biden’s name, but in terms of wrongdoing, they just couldn’t. And the report actually said they couldn’t establish any evidence of wrongdoing. And Joe Biden was apparently in on it too, according to Donald Trump and dang it. That means he needs to withdraw from this race dropout. Totally unfair, dude, you go, Oh, by the way, you Trump, you yourself, you got impeached for what you did with Ukraine. Remember when you asked Zelinski to give you some dirt on Joe Biden or else, you know, it was going to be hard to release that aid that Congress had approved, that you didn’t have the authority to stall, but she did anyway, and you got impeached, but everybody forgot about the impeachment because obviously lots of things have happened since the impeachment, but nevertheless, you want to talk about crimes and Ukraine, dude, it’s you you’ve been impeached for that.

So here’s the thing. If Trump wants to go this route, it’s not going to work. I mean, yeah, there’s going to be plenty of Republicans that I know there already are, who think that this report released Wednesday morning, early Wednesday morning. That’s, you know, you don’t release things like that. If you want them to stick around in the news cycle, um, there’s gotta be some that believed that there was wrongdoing. And as I mentioned at the time when we covered it, they worded it in a way that actually lends itself to allowing conservatives to spin it as immoral, improper, wrong, but not. And that’s the key. There was nothing illegal about what happened, but Trump’s trying to get on there. He’s trying to spin it, trying to spin it. And I gotta tell you, I do search around conservative websites. They’re not pushing this issue as much as I thought they were. They’re not trying to spin it as much as I thought they were. Um, so that’s a little bit shocking. I thought for sure they were going to try to use those words, you know, improper on ethical, uh, the Biden kids were using his dad’s position to get rich. I really thought they were going to do a lot more with that or that it was going to be picked up a lot more.

And it simply hasn’t. This was supposed to be a big, you know, almost October surprise a few days before October surprise, I guess we call it and it turned into a giant, nothing burger, a nothing burger that is so weak that if it gets brought up, all it’s going to do is remind people that, Oh yeah, Trump was impeached for his Ukraine actions and that’s probably going to backfire even more. I promise you, there’s a lot of people in this country that legitimately forgot that Donald Trump was impeached. So if he wants to continue to push this and go down that path, it’s not going to end well for him. And it’s not going to hurt Joe Biden at all. And Joe Biden is certainly not going to drop out of the race as Trump would like him to.