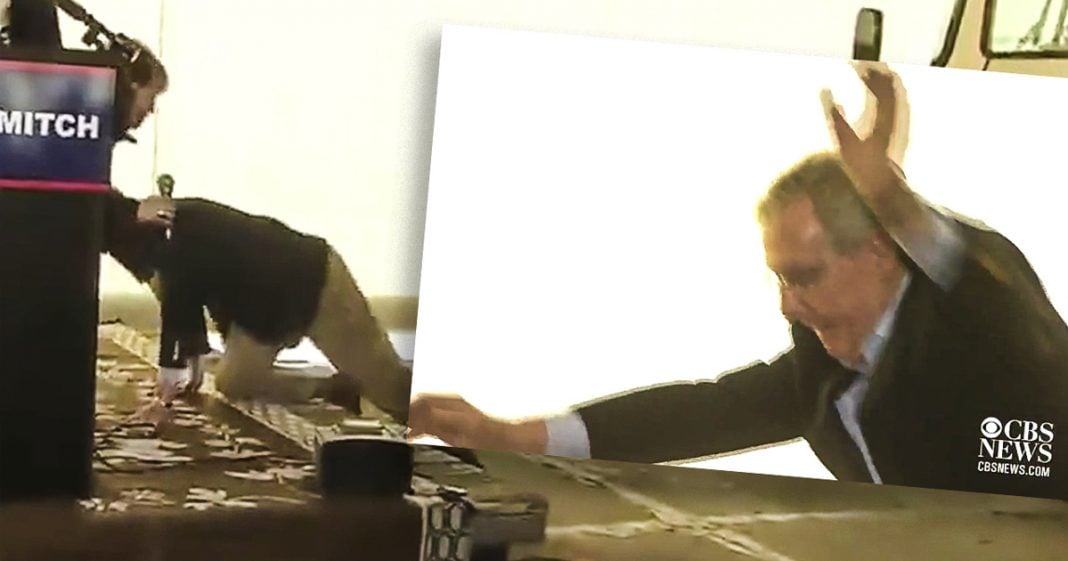 Senate Majority Leader Mitch McConnell tripped and fell while walking onstage to give a speech recently, and his fall seems to have, like most issues, divided the Left. Some are sympathetic because McConnell suffered from Polio as a child and overcame great odds to walk again, while others say that his nonstop assault on our country renders him an unsympathetic character. Ring of Fire’s Farron Cousins weighs in with his take.

Recently, uh, Senate majority leader, Mitch McConnell went to give his speech, his wife, transportation, secretary, Elaine Chao was introducing him at the speech. Mitch McConnell goes to walk up on stage and he trips and falls. Uh, this clip, obviously that little portion of the clip made its rounds online. So if you haven’t seen it yet, here’s the clip of Mitch McConnell falling down, on his way to give a speech.

Now, if you’re like me, the initial reaction is, Oh my God, that’s hilarious. Right. Um, I didn’t know, by the way that Mitch McConnell had had polio as a kid. So that kind of changes the perspective on it kind of right. I mean, doesn’t it, shouldn’t it, should we feel sympathy? Cause when you go to and you can actually, the, the tweet where this came from is LinkedIn. The description of this video, go through and read the comments. Like every other one, you know, kind of bounces back and forth. You have the people who say I have no sympathy for him. The polio that crap doesn’t matter. He is a horrible human being who has done horrible things for his entire career. I’m going to laugh at him and feel no sympathy towards him. Then you have the other people saying, listen, there’s tons of things to attack Mitch McConnell on this.

And one of them let this go. He’s a human. We shouldn’t make fun of people for something they can’t control. Now I’m inclined to lean that way, but I’m also sometimes a bit of a jackass and I don’t feel any sympathy for Mitch McConnell. And I’m sorry, I don’t know. I’m not going to sit here and absolutely just brutally mock the man for falling down because I do understand. Yeah, he can’t control it, but what I will mock him for with this clip and this was something I, I didn’t see anybody talking about his wife, his wife is standing there at the podium, looks down at him on the ground and just sits there, staring at him like couldn’t care less that her husband is literally crawling on the ground because he fell down. I, you saw that, right? You know what? Play it again. And pay attention to Mitch McConnell’s wife. She is the one at the podium. That’s Elaine Chao, transportation, secretary pay attention to her. And what she does when her husband falls here, it is again, pay close attention.

Look right at the end. Yes. She finally was like, okay, am I going to, I guess I’m a help you a little bit. But like she didn’t care. She didn’t care that her husband is on the ground. Literally at that point crawling, she didn’t care. Maybe she was a little preoccupied thinking about the investigations, you know, for the allegedly improperly sending contracts who are families, companies, sending contracts to Mitch, McConnell’s donors. Maybe she’s a little preoccupied thinking, wow, because of you, I’m going to go to jail. Maybe I’m not going to help you. She’s not going to go to jail. Nothing’s going to come of those investigations because our investigative bodies in the house of representatives are absolutely toothless and weak. Even if they had teeth, they wouldn’t use them. But nevertheless, Mitch McConnell, you can pick whatever you side you want on whether or not to make fun of him for falling down. One thing we should be questioning though, is why he is still married to this woman who very clearly, when her husband needed help, didn’t seem to give a damn.