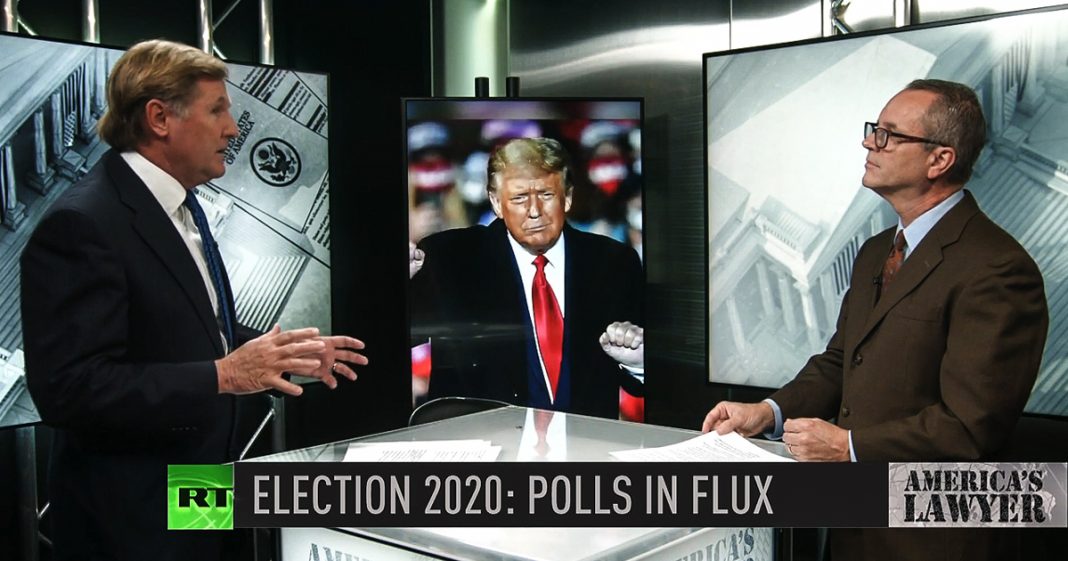 Via America’s Lawyer: Media analyst David Lamb joins Mike Papantonio to bring us up to speed on how Biden and Trump continue to claw for battleground states, and how voter polls may not paint a full picture.

Mike Papantonio:             The race for the white house seems to change by the hour with new polls, new allegations, new attacks, new endorsements, it’s difficult to make heads or tails of what’s going on with all this activity. That’s why we have David Lamb joins us. This is what he does every single day and has for a long time. So, so David, a couple of things, Ginsburg, is it a factor in this race? How is it a factor from the numbers that you’re seeing?

David Lamb:                         It’s it’s, it’s, it’s an interesting question. And the answer is I’m sorry, I don’t know. We’ll find out though. A number of things polling on it shows that 60% of those polled say they would rather this not be rammed through and not take place, but it’s going to take place and there’s going to be a vote. The fallout factor, in the 28 hours after Ginsburg passed away, there is a fundraising site act blue. It’s a fundraising platform. Democrats raised a hundred million dollars in 28 hours. So this is a passion point. You know, it’s a passion point on the right, because of, you know, the, the, the desire for conservative judges also on the left, as well.

Mike Papantonio:             Okay. But I saw that, I saw the big money raised it’s, it’s kinda moot though. Isn’t it? I mean, if they raised a hundred million dollars, it might help Biden be elected, but by then it’s too, it’s it’s really too late.

Mike Papantonio:             Okay. Let me run to the swing States. What’s happening? Give me the important talking points in the swing states.

David Lamb:                         Yeah, there are a number. So, so Arizona, Florida, Minnesota, Ohio, Iowa, Pennsylvania, those are all the cases that are kind of in play. Interesting polling coming out recently, a CBS news poll Arizona, Trump carried the state in 2016. Only one Republican has lost the state since Eisenhower. Biden now leads by three, a small move in his direction. And in Arizona on the issues who handles the co, coronavirus better, Biden. Who handles the economy better, Trump. Manufacturing, Trump and, and suburban women, these suburban women voters, you’re, you’re just hearing both candidates court, that block of voters. Moving in Biden’s direction, especially white women with a college degree, Biden now has a double digit lead with that group. And in Minnesota, Trump narrowly lost the state in 2016. The thought was, he’s got a chance there, poured $14 million in television advertising, but a new polling coming out Biden leading 50 to 41 among likely voters.

Mike Papantonio:             Okay. So what you’ve got is you, you certainly have Trump hitting, Trump’s out there every day. There’s a new rally every day. He pulls the, you know, he pulls the jet into the airport.

Mike Papantonio:             You’re seeing that the talking point that you’re hearing from the Republicans, not just Trump.

Mike Papantonio:             I mean, I don’t, I haven’t seen any proof of that one way or the other, but it’s their talking point, they believe in that so much. So if you’ve, I guess their thought is you give him enough Adderall, he’s going to be do, he’s going to do fine in the debates. I don’t know.

David Lamb:                         It is. You hear every rally Trump has, the number of times he says that phrase is, is innumerable. A Monmouth poll, 65% of Americans say that maintaining law and order is a problem in the US right now. So folks do not feel settled about that and are concerned, 60%. This is what’s interesting to me, Pap, 60% of non Republicans who are black feel the same way. So 60% of largely Democrat, democratic voters, feel the same way as well, but, okay. So that’s all good news for Trump. On the issue who is better able to maintain law and order, believe it or not Biden leads in this Monmouth poll, 52 to 48.

Mike Papantonio:             Okay. So you’re also hearing that, that, you know, that Trump’s making inroads to minorities, that there’s this notion that the, the African American voter is really upset about police, defunding police. It’s their neighborhood that they call a policemen and they want them there. You’re hearing in the Latinos that, you know, the Latinos that have been here for years are not really embracing this idea of just letting everybody into the country and just saying, okay, just come on in. Are, are these big factors?

Mike Papantonio:             That’ll be the difference. My prediction is Trump wins Florida.