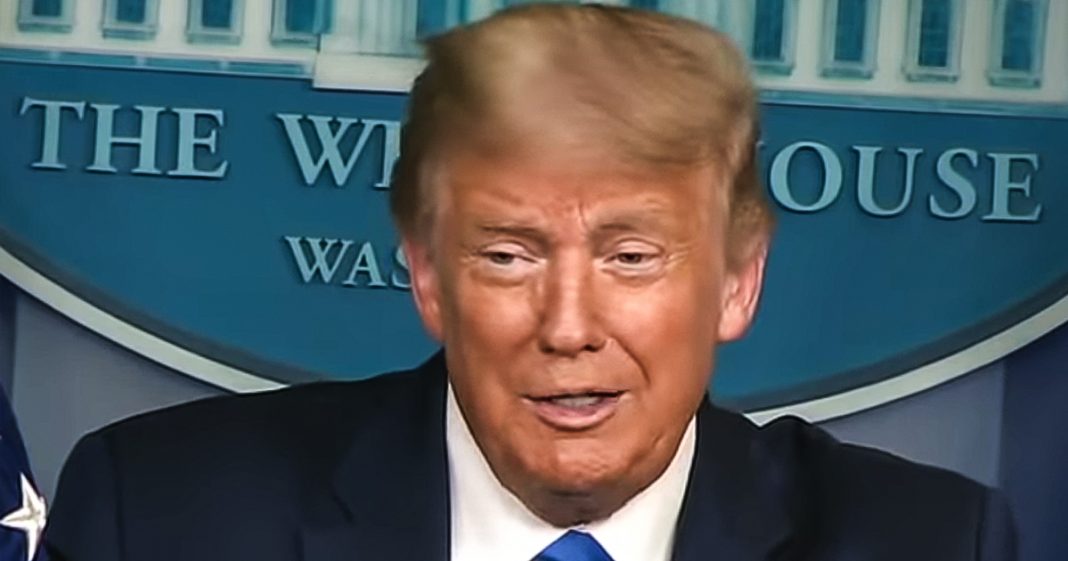 Donald Trump caused a nationwide panic yesterday after he was asked about transitioning power peacefully if he loses in November and refusing to say that he would do so. His comments seemed to elevate the fears that liberals have held for a long time, but the truth is that there’s little he can do if he loses. However, there are very real fears, and plans, about him stealing the election, as Ring of Fire’s Farron Cousins explains.

Yesterday during a press conference at the white house, Donald Trump for the second time in three months would not commit to a peaceful transferal of power. If he loses the November election the first time, by the way, being back in July, during that disastrous Chris Wallace interview, uh, yesterday it was Playboy’s white house correspondent, Brian Corrine, who asked Donald Trump point blank. Uh, you know, would you commit here today for a peaceful transfer of power after the November election? And Trump refused to say, yes, here’s what Trump said. We’re going to have to see what happens. You know, that I’ve been complaining very strongly about the ballot and the ballots are a disaster, uh, get rid of the ballots and you’ll have a very peaceful, there won’t be a transfer, frankly. There’ll be a continuation.

Everybody panicked after this statement by Donald Trump. Because again, Trump has repeatedly, you know, uh, made jokes and passing remarks and sometimes seemingly very serious remarks about staying in office longer than he is allowed to do, you know, perhaps seeking a third term because the first one was stolen from him because the Mueller investigation, uh, you know, not leaving office, if he loses in November. Now, those are things that actually had to say this yesterday again for the millionth time. So for 1,000,001 times it’s not up to him folks, it’s 100% not up to him. I know he can joke about it and he can, you know, get everybody all riled up with it. And that’s exactly the point of what he did yesterday by, by the way. That’s what that was. Is it a little, a little bit scary? Yeah, absolutely. We have a president here joking about ignoring the constitution.

That’s done. It’s not okay. That’s really not okay. But is it something that we need to, you know, crap, her pants over? Absolutely not. There are things that do hit that level. I’ll talk about those in a moment, but right now this statement that he made yesterday, nothing he can do about it. It doesn’t matter if it’s peaceful. It doesn’t matter if he’s pissy. It doesn’t matter if he even sits and talks to Joe Biden as the president does with the incoming president, you know, and has the meetings and says, this is how things work. This is where things are, Joe. Biden’s already got a dude. That’s going to do that for him. And guy’s name is Barack Obama. So we don’t have to worry about that. Post Joe Biden was vice president for eight years. He has pretty good understanding of how things work and what goes on.

He doesn’t need to have those big meetings like, okay, you’re new to this. You got to know everything. No, Joe Biden pretty much knows it all. So don’t worry about those kinds of things. Trump can be mad. He can be pouty. He can be pissy. He can refuse to meet with Biden, whatever, but at 12:00 PM Eastern standard time on January 20th, 2021. Okay. Donald Trump’s term as president of the United States expires as per the States constitution. The only thing that can extend that is a victory with the electoral college in the 2020 presidential election, that’s it. He can cross his arms and say, I’m not leaving January 20th at 12:00 PM. The year 2021. You no longer have control of the secret service. The United States, military, uh, your staffers, no, nothing, nothing. You have control of nothing, these people, and you’re not the president anymore. So you are not protected.

They can literally grab you up, pick your fat ass up and throw you out of the white house. You cannot stay because you lose your authority at noon on January 20th, 2021, unless you secure an electoral college victory in the 2020 election. Now that’s the part we should be scared about because it was reported yesterday that his campaign and actually Brian crim is the one who got this scoop. Um, Oh no, no, no, it wasn’t. I’m sorry. Excuse me. But either way, the report came out yesterday that Trump’s campaign is actually working on what they’re calling quote contingency plans on essentially ways to steal the presidential election. And as we discussed yesterday, those plans involve if Trump loses the popular vote in a red swing state like Florida, for example, they’re going to ask the Republican governor most likely, according to a Trump campaign official, they’re going to tell the Republican governor, there was too much fraud in your state.

Like Trump mentioned yesterday, too much fraud in your state. Your electors cannot vote for Joe Biden because of all the fraud, select new electors who are loyal to me and who will go to the electoral college and vote for me, constitutionally that’s allowed. So that’s where our concern needs to be. Don’t panic about Trump saying I’m going to be president forever. He would literally have to suspend the constitution in order to do that. And technically, if he suspended the constitution, he would no longer have any authority. Technically whatsoever. The military itself could revolt. It would be a civil war. Absolutely, but he wouldn’t win it. So that’s the one side of it. And that’s the Farfetch probably never going to happen. So I plus Trump’s a coward. The dude is not going to overstay with the threat of force to remove him. He is a cow word.

So stop worrying about that. Start worrying about the real stuff, him stealing the election by having these crazed right-wing governors like Ron DeSantis down here in Florida, threatening to install their own Trump loyal electors to the electoral college. That is what we need to be concerned about. And that is what we need to figure out a way to prevent. One of today’s video sponsors is surf, shark VPN. And right now they have an amazing exclusive deal for our ring of fire audience. Just go to surf shark.deals/ring of fire, and you can get 83% off a two year subscription plus three months for free. You can also enter code ring of fire at checkout, or simply click on the link at the top of the video description below. If you are not searching the web while using a VPN, your data is not as secure as you would like to think.

It is. You can be tracked by websites. You’re vulnerable to phishing schemes, to malware, even to hackers trying to access your personal information. I know I have been there. You’re looking at somebody who’s had their personal, a debit card number stolen off the internet twice. And I should’ve learned after the first time, but I definitely learned after the second time. And I always use a VPN now and surf shark is the one that I use. So hopefully you take advantage of this wonderful offer. Again, 83% off a two year deal, plus three months for free just surf shark.deal/ring of fire or inner code ring of fire at checkout that makes $2 and 21 cents. Your total cost per month for a little bit of peace of mind. And trust me, that can go a long way. Surf shark.deal/ring of fire or inner code ring of fire at checkout, or just click on the link below at the top of the video description.