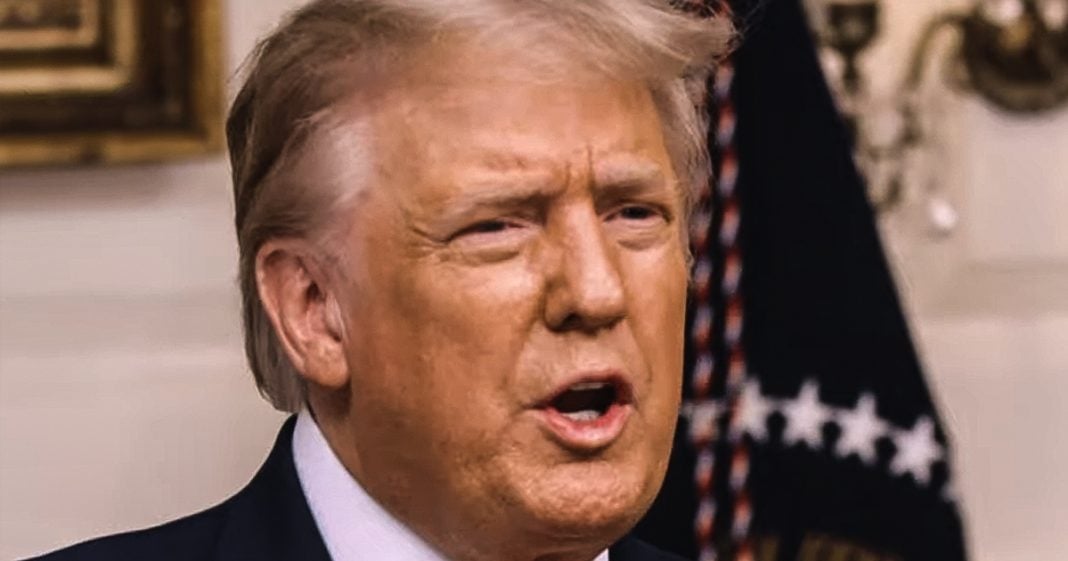 Every time Donald Trump gets the opportunity to be a real leader, he fails miserably. That is the lesson that Americans should have learned over the last 4 years. According to a new report by The Washington Post, the President actually nixed an idea to have the post office deliver hundreds of millions of face masks to American citizens in the early days of the pandemic. Ring of Fire’s Farron Cousins discusses this and explains what could have happened if he had followed through on this plan.

According to internal white house documents obtained by CNN. This week, the white house had actually planned on sending 650 million face masks to everybody in the United States, not 650 million to every person, but 650 million to people across the United States, which, uh, pretty much amounts to like two masks per person in this country. They were going to do this back in April. That was the plan that we’re going to use the post office to send out hundreds of millions of masks. Because in back in April, I don’t know if you remember this mass were very hard to come by and there was no mask mandate. Most States didn’t have any kind of mask mandate whatsoever. So the white house was with a very good plan going to say, cool, Hey, we’ve got some ass. We had 650 million. Let’s send them out there, but he gets two masks, send them out using the mail. We can make this happen fast. Everybody gets their mask. They wear it for a couple of weeks. Boom, pandemic over life goes back to normal. And then the Trump administration decided, yeah,

Yeah, let’s not do that. Let’s just not, you know, we could, we should, but we’re not. So they killed the plan. They killed the plan that would have given everybody a mask, every Democrat, every Republican, every libertarian, every member of the green party, every white person, every, a black person, every minority of every religion of whatever you were. Everybody got a mask. Everybody would have been equal. Everybody would have been on the same playing field. And all you would have had to do was put the goddamn thing on for a couple of weeks. Anytime you went out And the white house looked at that plan and said, no, No, not going to do it.

Had they done this? We likely would have avoided all of those anti mass protestors who thought it was the damn liberals out there telling us what to do with our bodies. Cause God forbid the government does that. Right? Um, it would have come from Trump. So, so the people on the left who actually understand and believe the science would have worn the mask, people on the right, because it came from Trump. They would have worn that mass 24 hours a day, probably even in the shower because it came from Trump and it wouldn’t matter. Cause we could have beaten this stupid thing. We wouldn’t have had all the idiots out there marching through targets in Florida saying down with masks, we’re not smart. No, they could have stopped this thing folks. That’s the point, time after time, based on all of the evidence that we have. And again, CNN obtained internal documents from the white house time after time, this administration has been given the opportunity to lead this country, to help this country, to solve a massive problem. The likes of which we haven’t ever seen in our lifetimes. And every time they’ve been given the opportunity to lead, to do the right thing, they straight up said, no, we’re not going to do it.

And again, the reason as well, it might scare people. If they get mass in the mail, this was in April. Everybody knew there was a frickin pandemic. Okay. Everybody knew and everybody knew what was happening. And this was also back when you were doing your, your little daily briefings on TV. So you could have just said in one of the briefings, Hey, by the way, okay, listen, here’s what we’re going to do. We’re just going to send everybody a couple of masks. If you’re just throwing on your face and you run into the grocery store or one of the gas station, whatever it is, run under target, uh, just put the mask on. Yeah, we’ll get through this thing in a couple of weeks, you know, by then the incubation period will have passed. If everybody has a mass, if you have symptoms, go to the doctor, we get treated. We’re going to do the best we can. If you don’t have symptoms, continue to wearing the mask for like one or two more weeks. After that five, six weeks tops folks we’ll be through with this. We don’t have to shut everything down, just wear the mask and we’ll even provide it for you. That’s it. That’s all he had to do. But even that for somebody as lazy and incompetent as Donald Trump, even what I just said was a little too much for him to handle.