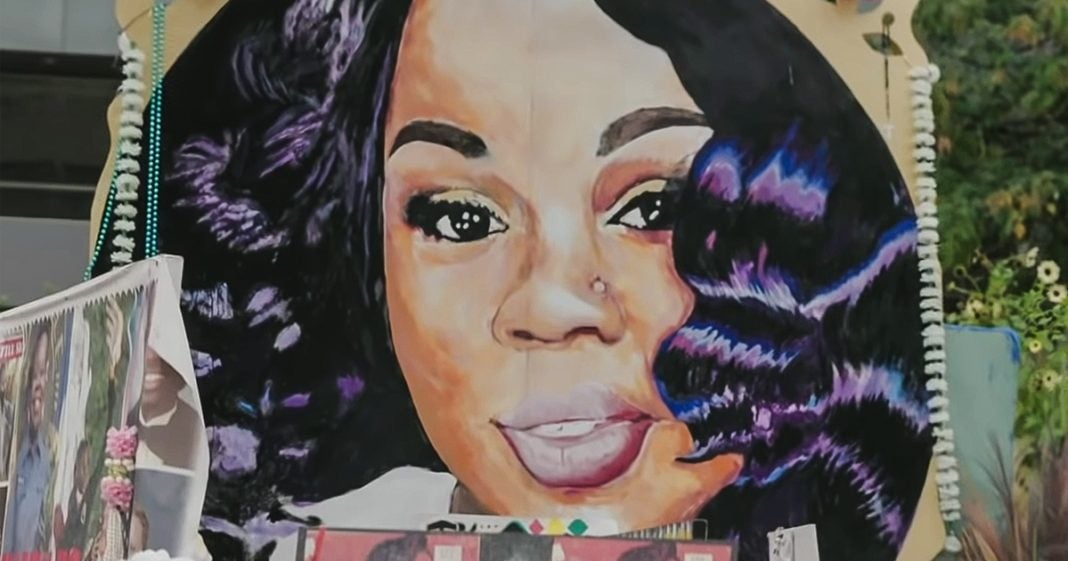 Not a single officer involved in the murder of Breonna Taylor is being held accountable for her death, but one officer IS being charged with property damage. The Grand Jury decision that was handed down yesterday is an absolute insult to black Americans, and gives us yet another example of why cops continue to murder people for no reason. Ring of Fire’s Farron Cousins discusses this.

Yesterday, the grand jury decision was handed down in the Brianna Taylor murder case, uh, were multiple different police officers were awaiting their fate waiting to find out if they were actually going to face justice or if like almost every other cop in this country, they were going to get away with it. And it turns out they got away with it. The only charge filed against one police officer in this case, uh, was for wanton endangerment essentially because the officers, when they went into the apartment and murdered Briana Taylor, uh, they were shooting blindly. So they didn’t know where they were shooting or what they were shooting at. Just shooting these plain clothes, police officers. Cause they were all off duty. I believe. Uh, just shooting killed Brianna Taylor while she was asleep. And I get more to that in just a moment. And the only thing one officer out of at least three got charged for was for hitting the wall. As somebody put it, they only got charged for the bullets that missed because it could have killed somebody else, but it did kill somebody. It killed Briana Taylor. It killed the woman in that apartment. And nobody is being charged for the fact that this woman, a paramedic who was sleeping is dead. Nobody, nobody has to face justice for that at all, at all. It’s over. That’s it.

Now, the reason I bring up the fact that she is sleeping is because this case really highlights how disgusting the justice system for police officers in the United States is it also runs against every single talking point Republicans have on these issues. You see it all the time. Well, if you just comply, you won’t get shot. We’ve seen plenty of times where they’ve been complying. They still get shot, but Republicans will still try to say no. Well he didn’t, he didn’t know. They, they know they weren’t okay. This one was asleep in her own place and the cops came in and shot her. How do you defend that? How do you defend that? I am legitimately asking for an answer because guess what? Republicans, Republicans, you should be pissed off about this one too. Everybody should.

Now here’s the thing about the grand jury. Mike Papantonio has explained this ad nauseum on ring of fire here all the way back through the Michael Brown days. And I’m going to try to summarize the explanations he gave back then, because this is a man who has worked inside the justice system for decades. He knows what he’s talking about. Police officers have to work very closely with prosecutors. Um, you know, they have to share evidence, share information. They, they hang out together. They’re friends, they’re buddies. So we’re expecting that same prosecutor. When one of their friends, somebody they’ve worked with for years, something wrong. That’s the same prosecutor that has to compile evidence to see if we’re going to prosecute them or not. The whole system is rigged from the start.

That’s why cops get away with it. It’s not just because, Oh, we don’t want to hold them accountable. No, it’s even more sinister than that is that they’re all friends. There is this incestuous relationship between the prosecutor’s offices, between the police officers. Again, they work together. They hang out together. They go out for a drink together they’re side by side constantly. And if you were to ask one of your own friends to put together evidence, to present to a grand jury, to determine whether or not you’re going to go to jail for the rest of your life, I can guarantee you that friend is not going to do a very good job. That coworker, probably not going to do a very good job of it. The outcome is predetermined and this is, you know, hopefully I’m explaining it. Uh, as Mike Papantonio intended it on the, obviously not trying to put words in his mouth, but the outcome is whatever the prosecutor wants it to be.

That’s how easy it is to get a grand jury to go one way or the other. It all depends on which evidence you put forward, which evidence you decide to withhold. It’s all on that prosecutor. And the prosecutor in this particular instance, absolutely knew what they were doing. There is no excuse for a man, whether it’s a police officer or just somebody off the street to walk into any place on the planet and just start wildly shooting and then to kill somebody and not be held accountable. And you wonder why people protest. You wonder why people riot. We have already had multiple police officers shot now, uh, in the, the protests that have taken place, the riots that have taken place since this decision was handed down, they knew this was going to happen. And they knew this was going to be the decision by the way. Cause they already declared a state of emergency long before the decision came down, they knew they knew nobody was going to be held accountable and they had their riot cops out there ready to go, ready to kill more people if they had to, because guess what? Nobody’s going to be held accountable. Even if they do.