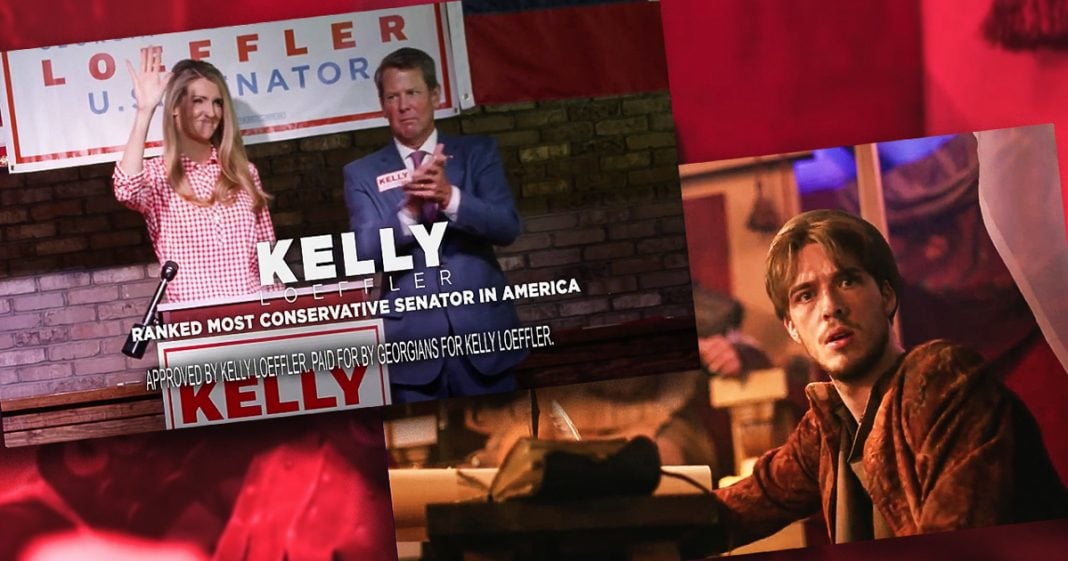 Republican Senator Kelly Loeffler – the woman who allegedly did NOT break insider trading laws earlier this year even though it was quite obvious that it likely happened – has released a new ad where a narrator claims that she is more conservative than a brutal conqueror from early history. It then goes on to joke about this conqueror, Atilla the Hun, murdering leftists, and says that Loeffler is more extreme than that. Ring of Fire’s Farron Cousins discusses this.

Republican Senator Kelly Loeffler, the wealthiest member of the United States Senate, by the way, uh, her and her husband, Jeff Sprecher, who also happens to be the, uh, chairman of the New York stock exchange. Um, Loeffler’s put out a new ad that is so amateur, so juvenile and so revolting that most people who saw it didn’t actually think it was real. They thought it was a joke at first that some person online had created this thing and pretend that it was from Kelly Loeffler, but turns out this surreal ad from levelers a reelection campaign. And this is what it is. Take a look.

Now I’ll get to the, uh, insane statements made in that. And just a moment, but I have to reiterate the fact that this is a woman with a net worth of $500 million. You got half a billion dollars sitting in the bank or sitting in stocks that, you know, you, you sold or you traded because she knew insider information cause the pandemic, but the FBI for some reason, decided not to charge you. Uh, that’s another point too, before I even finished the other point, I’m going to go onto this point. Kelly Loeffler should have been arrested for insider trading. That’s obvious, but the FBI looked into it and thought, Nope, we can’t find enough information. Even though Loeffler went to a meeting, was told all this horrible information about how bad the pandemic is going to be before the public was alerted, immediately went sold. All her stocks then bought stocks in companies that would benefit from people working remotely.

Her husband, chairman of the New York stock exchange did the exact same thing, but gee, we can’t pin insider trading on him. Uh, bull bull. There is nothing anyone on this planet will ever be able to do to convince me that Kelly Loeffler and her husband, Jeff Sprecher did not engage in insider trading. I know the FBI says that they didn’t, I don’t believe that for a second, based on just the available evidence that we have. So that’s her thing. So anyway, $500 million. A lot of it ill gotten apparently, uh, if the insider trading thing is true and this is the best you got, I mean for $500 million, if you, if you’re sitting on half a billion dollars in net worth, you should be able to put out campaign ads, starring Brad Pitt, right? I mean, you’ve got the money, but instead you hire these people who can barely act themselves out of a paper bag, production quality looks like you had a couple of kids in middle school, put it together. And then of course comes the really obscene part where you claim to be more conservative than Attila the Hun. And then you show Attila the Hun calling for the death of liberal scribes.

So by, by the, uh, properties given to us here, you’re more conservative than a man who says we should kill the liberal scribes. So what does that mean? You’re going to do Kelly, are you saying you’re going to kill us, that you’re going to kill any member of the liberal media because you’re worse than Attila the Hun, is that what you’re getting at? Because if so, um, I think maybe it’s time for the FBI to get off their asses. And re-investigate you not just for the insider trading thing, but uh, for this as well, because I would absolutely being a liberal scribe here in the liberal press. Uh, I’m more than willing to press charges if needed, if that is in fact what you’re calling for. So I would think long and hard before you put out another ad being completely reckless of what you say, because yeah, you’ve got a lot of money. I know a lot of lawyers.

So that’s that Loeffler is not gotta be careful with my words here, but she does not appear to be somebody who is taking this job. Seriously. Loeffler is somebody who had a ton of money, more money again than any other member of Congress. In fact, the next wealthiest member member of Congress, Greg Jim forte from Montana, um, is $365 million poorer than Loeffler. Like that’s how big that gap is. She wanted power and she will do whatever it takes to retain that power. She also wants her money. And as we saw earlier this year with the selling of the stocks, with that info, um, she’ll do whatever it takes to retain that money. And based on what we have seen from her, she is the kind of person that deserves neither. She should not have access to this kind of money. She should not have access to this kind of power. She is a disgusting individual who put out one of the most amateurish and disgusting ads that we’ve seen so far in this campaign cycle.