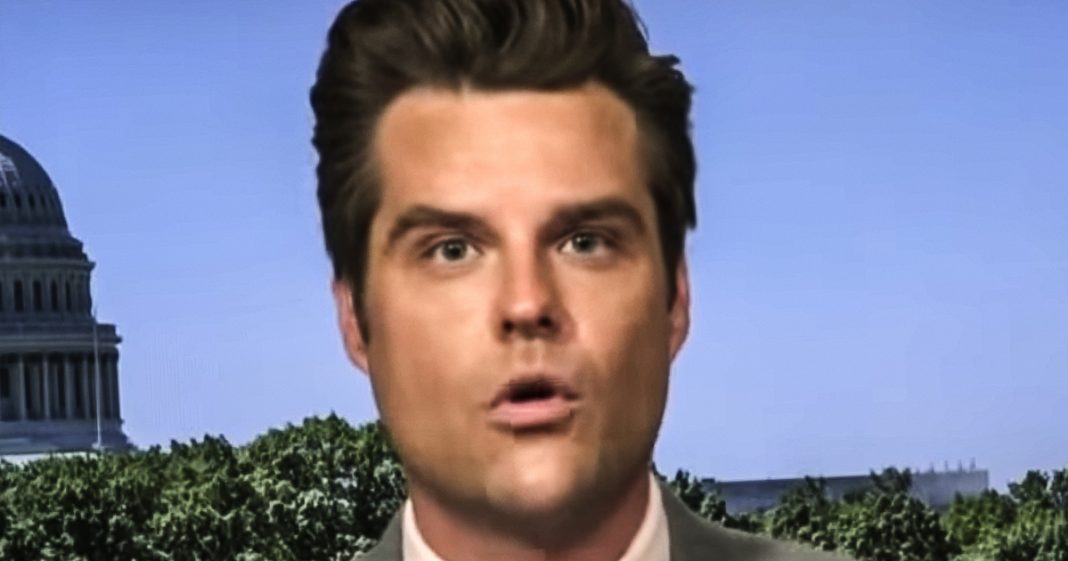 Republican Congressman Matt Gaetz has never been accused of being intelligent, and his latest attack on Democrats and Michael Bloomberg are absolutely bonkers. Gaetz claims that the efforts of Democrats to pay off the fines of former felons in Florida so that they can get their right to vote back is tantamount to bribery, and he has now called for an investigation. Ring of Fire’s Farron Cousins explains why Gaetz is really angry.

Republicans thought they’d been handed a massive victory last week when the circuit court ruled that Florida’s poll tax on former felons, forcing them to repay all of their fines before they could register to vote, uh, was in fact, legal, previous courts had said, no, you can’t do that. It is a poll tax, but circuit court said, Oh, hell yeah, make them pay. They can’t vote until they pay Republicans last week, when that ruling came down, I thought, hell yeah, we got the victory. That’s going to secure Florida for us. But then Michael Bloomberg for probably the first time in his life decided I’m going to do something awesome with my money. Yeah. Not the first time. He’s been great on the, uh, you know, uh, gun control issue. So for the second time in his life, Michael Bloomberg did something great with his money and he, and several other, uh, wealthy individuals, wealthy groups, liberal activists came down to the state of Florida, started paying off the fines of these former felons.

As of right now, they’ve paid off the fines of over 32,000 former felons who they’re helping to register to vote. Inter Matt Gaetz, Republican Congressman from my horrible district up here in Northwestern, Florida, and Matt Gaetz went on Sean Hannity’s program earlier this week to say that what is happening right now in the state of Florida because of Bloomberg is tantamount to bribery. That’s right. Michael Bloomberg. And these other democratic groups are down here in Florida, bribing voters to vote for Democrats by paying off their fines. And Gaetz said, I believe there may be a criminal investigation already underway of the Bloomberg connected activities in Florida. And then he went on to say, under Florida law, it’s a third degree felony for someone to either directly or indirectly provide something of value to impact whether or not someone votes. So the question is whether or not paying off someone’s fines and legal obligations counts as something of value. And it clearly does something of value has to be something that you have.

So you owe a debt and then somebody pays that debt. Is that now a thing that you have, do you have something of value out of that? Do you have anything tangible, anything at all that you can show and say here, whether it’s material, whether it only exists on paper, is there anything that you just gained physically from not having that debt? The answer is no. And here’s why. And Matt Gaetz is a lawyer went to law school. He’s been a, you know, what kind of, kind of got in trouble with the Florida bar a couple times for the witness tampering with Michael Cohen. So I don’t know if I would take his legal advice, but I did not go to law school, but I do words and concepts and meanings and things like that. And this is actually not that hard to argue that no, this is not in fact bribery, because if paying off someone’s fines amounts to bribery, then by definition imposing that they have to pay off the fine before they can vote. Tan is tantamount to suppression. If it is in fact suppression, if it is intentionally suppressing them, then it’s illegal. So if Gaetz were to be successful in claiming that Bloomberg and these other liberal groups did engage in bribery with these voters, then it would also mean that the order itself to say, you have to pay the fines in order to vote, would in fact be an intentional move to suppress the vote, which would then make it illegal. So sorry, Matt, Any way you look at it, you kind of lose here. That’s just the way it is.