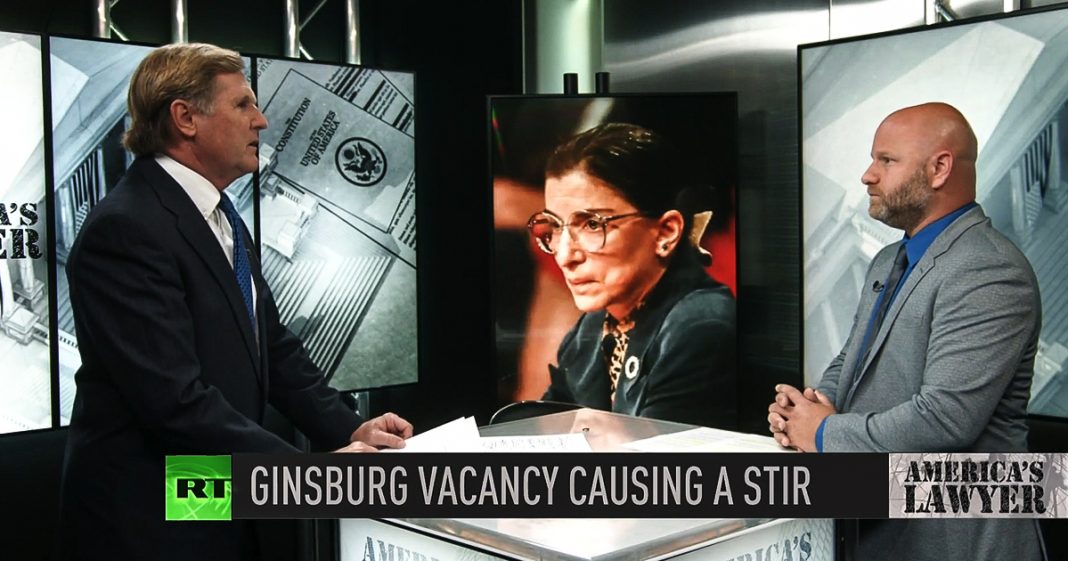 Via America’s Lawyer: As the country mourns the death of justice Ruth Bader Ginsburg, her Supreme Court vacancy has Republican lawmakers backpedaling on previous comments regarding SCOTUS nominations prior to a presidential election. Mike Papantonio & Farron Cousins to discuss more.

Mike Papantonio:             Don’t act shocked that Mitch McConnell wants to fill a Supreme Court vacancy during an election year, even though he said that that shouldn’t be done just four years ago. The passing of Ruth Bader Ginsburg has now changed the dynamic of the 2020 election. I have Farron Cousins here, editor of the trial lawyer magazine, to talk about it. You know, the, the loss is huge. This is, this is a jurist and a woman who has inspired so many women to move into the law. That’s that’s, that’s just the beginning.

Mike Papantonio:             That’s just the beginning of, of, of this of Ginsburg. I mean, if you take a look at her, her rulings, it’s, it’s in a lot of ways saved America. Give me your, give me your take on is McConnell serious about this?

Farron Cousins:                  McConnell is dead serious about this. I mean, if he had his way, I think we would actually be talking about a nominee already today. Because McConnell that’s, that’s been his one and only goal for his personal legacy for many years now. And that is to pack the courts. Supreme Court seats for McConnell are the bonus round. You know, he’s, he’s gotten well over 100, well over a hundred in just the last few years with Trump, and this is going to solidify that six to three majority on the Supreme Court. And honestly, it was, it got to the point of being obnoxious this past weekend, watching people on social media tweet out at Mitch, the finger wagging saying, no, you said you couldn’t do it. If you’ve paid a bit of attention to politics for the last decade, you knew this would happen.

Mike Papantonio:             You know, Pelosi can talk about impeaching and all this crazy talk that I don’t even know. Where does it come from? Where does the crazy talk come from? And how has it perpetuated? Is it somebody just says, hey, what if we do this? And then the next person, hey, that sounds like a good idea, without any thought of understanding, what’s at stake here. This is a serious issue.

Farron Cousins:                  Right. And a lot of it does originate online because people do understand, or some of them, the senate can’t do anything if they have articles of impeachment that they have to deliberate.

Farron Cousins:                  Because that would be political suicide for the Democrats heading into the election, try to impeach a man, we know he’s corrupt, but you don’t really have an actual crime here to impeach him for at the moment. So that would absolutely energize Trump’s base. So Pelosi cannot stop it and I don’t even think if she could, she would. We’ve seen that from her too much.

Mike Papantonio:             You see the, what this is, is a rallying cry for conservatives and later in the show I’m going to talk to David Lamb, who’s an expert on the polling, get his take on this. But, you know, instinctively you say this is a rallying point. And then the more the Democrats do to call attention to that rallying point, the more serious it becomes for I think Democrats than it does Republicans because it is, it’s all I think when you take a look at the numbers, it’s, who’s going to turn out. Who’s the most excited about their candidate, who thinks he’s going to do the less damage. You know, it’s kind of lesser of two evils kind of analysis here. So, so, so you have some folks that are saying that they’re going to maybe, you know, maybe they’re going to hold out. I don’t believe it. You’ve got a, you’ve got a what a 53 seat issue. They need 51. So if they lose two, that’s the possibility. So you’ve got Murkowski, that’s in the mix. You got, you got, you’ve got.

Mike Papantonio:             I mean, I don’t know about you, but I’m not buying Murkowski for example and I’m not buying Grassley. I, Grassley hasn’t said anything. He’s, he kind of threw his ideas out there. Grassley’s not gonna, is not going to buck the system here, is he?

Farron Cousins:                  So as disappointing as it is that we’re going to have an appointee. And right now the name being floated is Amy Coney Barrett. Oh, she’s terrifying.

Mike Papantonio:             No, no. You and I’ve done stories about her. We need to pick up on that story probably next week to understand just how terrifying this woman is, maybe far worse than any of the males that they’ve put up there.

Farron Cousins:                  And it’s, it’s, it’s saddening obviously to think that this is the woman who’s going to replace Ruth Bader Ginsburg. But unfortunately the reality that we all have to understand at the moment, we cannot stop this from happening.