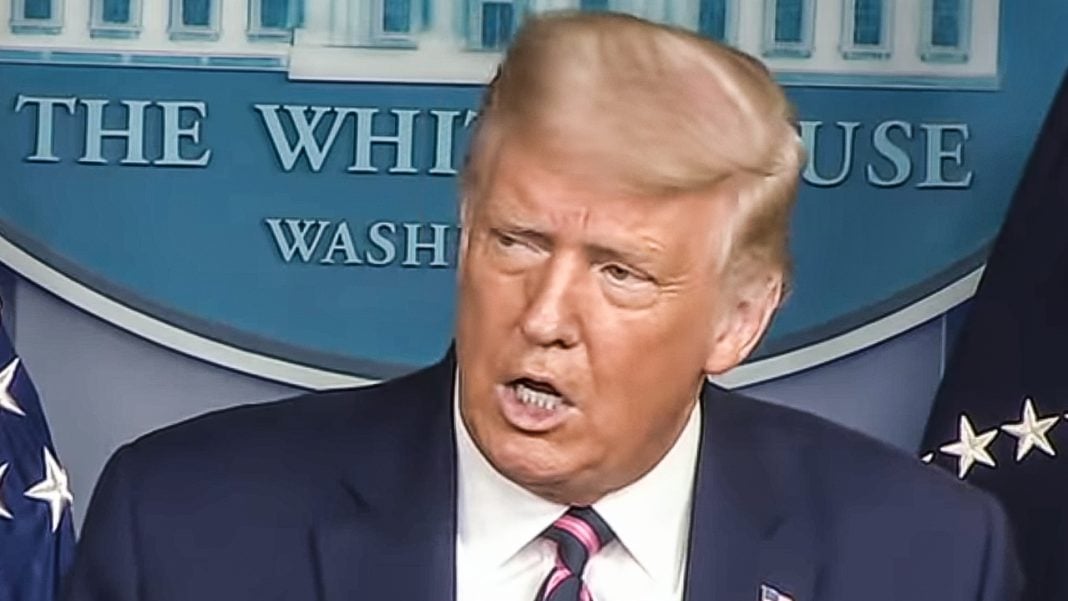 According to a shocking new report in The Atlantic, Donald Trump’s campaign is actually working on contingency plans to allow Trump to remain president even if he loses the election. The plan is to essentially steal the election by having Republican governors in swing states declare their state totals to be “invalid”, but only if Trump loses, then replace their electors with loyal Trumpists. Yet another reason why the electoral college should be abolished, as Ring of Fire’s Farron Cousins explains.

According to a shocking new report in the Atlantic, a Trump campaign advisor has admitted that the Donald Trump campaign is trying to work on a contingency plan to make sure that no matter what happens, Donald Trump stays in power after the November election. Even if he loses now in the past, I have pointed out plenty of times that there is nothing Trump can do to stay in office if he loses the election. And that is still true. The constitution does have mechanisms in place that actually prevent that from even being able to happen. He would have to suspend the constitution itself in order to do that, not necessarily out of the realm of possibility, but I don’t think there’s enough people willing to let him do that. But that’s not what, this is what this is, is a Trump campaign advisor who flat out, told the Atlantic of their plan to steal the election so that Trump does win, even if he doesn’t win.

And here is how that Trump advisor explained it. Uh, right now you have swing States controlled by Republican governors who are very loyal to Trump. For example, Florida, where I am, our governor actually ran on the platform of, I loved Donald Trump back in 2018. So that’s all that dude’s about all he is, is I love Donald Trump in a very uncomfortable, uh, way like a creepy, creepy kind of obsession I have with him. He would absolutely do with this plan is, and here it is. If Joe Biden wins a swing state, we’ll use Florida again, as the example, Trump will immediately come out and claim that the total of votes from the state is legitimate. Cause there was too much voter fraud, which is why he’s been planting the seeds of voter fraud for four years people. Um, so he’s going to say there was voter fraud and he’s going to call on the governor to select an entirely new group of electors to send to the electoral college convention. And those electors are going to be people who are loyal to Donald Trump, who even though their state voted for Biden, they’re going to go to the electoral college and cast their vote to Donald Trump.

The constitution actually does allow this to happen because that’s how stupid the electoral college is. And I’m going to go ahead a little step further and say that anyone who defends the electoral college, uh, not too bright themselves, either. This is insanity folks. Now I’m concerned. Now, now I’m starting to get angry, pissed and scared, pissed, because this is absolutely something they could do. And as their own staffers have admitted, this is something they’re actually thinking about doing this could happen. And I’m not exactly sure how we fight back against something like this. Not exactly sure. You know, what’s, what’s going to be the, the end result of all of this. But I do know with Trump by election day, likely having a 63 majority on the U S Supreme court, I’m not optimistic. I’m not optimistic about the future of this country at all.

What I am optimistic about is a hopefully very soon getting passports for me and my family. You know, once they catch up on the backlog of all of that, uh, and possibly getting the hell out, this is getting to the point of actually legitimately being terrifying. What we’re seeing happen. All of those people who used to look back at, you know, Germany in the 1930s and say, how could you let this guy come to power? How could you allow this to happen in front of you? Yeah. We’re watching how you let that happen in real time right now. And if you’re not speaking out about it, you’re one of those people who would have allowed it to happen in the 1930s over in Europe, because you’re quite literally letting it happen today. In the United States, Trump has a legitimate plan to steal the election. Nothing else needs to be said.