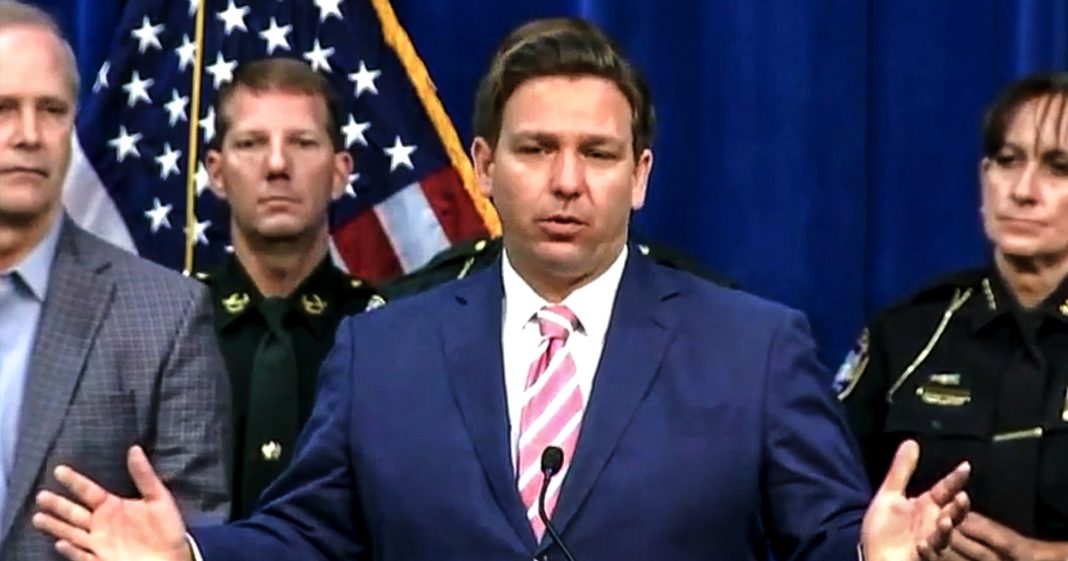 Under a proposed piece of legislation from Ron DeSantis, the Trump-loving governor of Florida, it would be legal for citizens to run over protestors without any fear of prosecution, as long as the protestor was in the street. This is a direct attack on the First Amendment of the United States, and DeSantis is merely trying to give voters the impression that things are out of control in the state. Ring of Fire’s Farron Cousins explains why DeSantis is doing this.

Ron DeSantis. The Trump loving governor from down here in my state of Florida, decided that he wanted to get in on the little bit of the fascism action that he has been seeing, taking place from the Trump administration. So earlier this week, he put forth a proposal of new state laws that would effectively not only get rid of most of your first amendment rights here in Florida, but it would also legally allow motorists to straight up murder protestors. That is what governor Ron DeSantis wants to do to the state of Florida. And during a little press conference that DC at this gave about this on the guest was Monday, uh, where he was flanked. Obviously he had police officers, you know, all kinds of law enforcement folks around him because hell yeah, blue lives matter. Folks. Uh, DeSantis said the following. He said, I look at what goes on in Portland.

They’ll have people they’ll arrest him. They’re all scraggly looking Antifa types. They get their mugshot taken. Then they get released. It’s like a carousel on and on. It goes, that’s not going to happen here in Florida. You’re right. It’s totally not going to happen here in Florida. It’s not even happening really to any degree outside of Portland. And it’s not even as bad in Portland as y’all are trying to make it sound like sure, you have some people up there that are doing some things that are absolutely not helping anyone, but it’s not spreading, especially not from Portland all the way down here to Florida not going to happen. Absolutely not. And I’ll tell you what, Ron, it’s gonna not happen. Not because of this legislation you’re proposing, but because that’s just not what happens Florida is for all intensive purposes. It’s a red state and red state folks tend to love to be told what to do. They love that authoritarianism. You know, I don’t want to think for myself, please tell me what to think

Up in Portland. Not so much. They really hate that. They really hate it. All being told what to think of what to do down here, Florida, not so much, unless of course it’s wear a mask and then they freak the fuck out. But anyway, here is what Florida governor Ron DeSantis. This is his official. Uh, this is from the state of Florida. This is the official proposal of the rule changes. Let me read this, uh, new criminal offenses to combat rioting, looting and violence, which again are not currently happening here in the state of Florida, nothing even close to it at all. Uh, prohibition on violent or disorderly assemblies. Third degree felony when seven or more persons are involved in an assembly and cause damage to property or injury to other persons. So if you’re with a group of seven and you damage something Suddenly that’s now a third degree felony, excuse me, Prohibition on obstructing roadways. Third degree felony to obstruct traffic during an unpermitted protest demonstration or violent or disorderly assembly driver is not liable for injury or death caused it fleeing for safety from a mob, Which means if you are protesting and you do not have a permit for it. I know it has the other lines in there about, or if it’s violent or if it’s disorder. But if you are protesting and you don’t have a permit and you’re in the road, the driver of a vehicle can run you over kill you. And the state cannot prosecute that person. That’s it.

The rest of these go on and on. They increase the punishments. Um, they increase the fines, mandatory minimum prison sentences for some of these things, uh, you can’t touch a statue in the state cause God forbid, we get rid of these, a racist participation trophies from the civil war. The state of Florida is gone off the freaking deep. And we’ve always been a little nuts down here. But Ron DeSantis is absolutely ushering us into a new level of crazy that I didn’t even think Florida could reach. I’ve been perfectly content living in Florida for most of my life. Yeah, we’ve had horrid right wing politicians, but we’ve always kind of countered that to a certain degree. That’s no longer the case. This state’s red folks. This state is red and I’m sick of it. I want out and I will get out at the first available opportunity. Ron DeSantis is my governor. Matt Gates is my representative in Congress, my senators or Marco Rubio and Rick Scott. Rick Scott is a man who should be in prison for pulling off the largest Medicare fraud in the history of the United States. That’s who we got. And now thanks to our little Trump loving governor. It’s legal to murder,

Okay. That’s where we are in the United States. And none of this, none of this, none of what DeSantis warned about is even happening. Not even as it not happening in Florida, it’s not even happening anywhere near Florida. You would literally have to travel a few thousand miles to find the nearest protest, to find the nearest riot, to find the nearest anarchist zone or whatever William Barr has termed them. It’s not happening down here. Maybe it’s because it’s too damn hot. To be honest with you too. I think plays a big role in it. Little too hot down here for people to be out in the street causing trouble. Okay. You walk outside the humidity’s like 8000%. You’re just, Oh God, I got to go inside. It’s gross. But I think the real reason is because what we’re seeing in some of these other places, isn’t actually happening.

What we’re seeing is right wing media, trying to push a narrative that there is very limited footage to back up, which is why on the Fox news programs, the folks on Twitter, they keep tweeting out the same footage over and over and over and over again. The protests have died down. There is not anarchy in New York city. Talk to somebody from New York city. It’s simply isn’t happening. Uh, half my wife’s family lives up in Wisconsin. It’s not happening up there anymore. Either folks, Republicans are lying and they’re using these lies to drive you, to vote for them out of fear, Even though all of these horrible things that they think are happening are happening under their watch. Trump is the president of the United States. At the end of the day, it all flows from the top.

What they have to deal with, but they can’t deal with that. Cause that would mean obviously in some form accepting some kind of responsibility or God forbid having to actually fix a problem. Something Republicans are physically and mentally incapable of actually doing. They don’t know how to fix problems and they don’t want to fix problems, even if they did know how. So instead they try to convince you like they are down here in Florida, that we’ve got to enact these strict laws that curtail your first amendment rights to prevent something from happening. That’s never going to happen down here because Portland is a bad place to be. I guess that is what they’re trying to sell to voters down here. And I’ll tell you it’s going to work. It absolutely is going to work down here because unfortunately that’s kind of the mentality of these Florida voters. If the governor says it must be true, right?