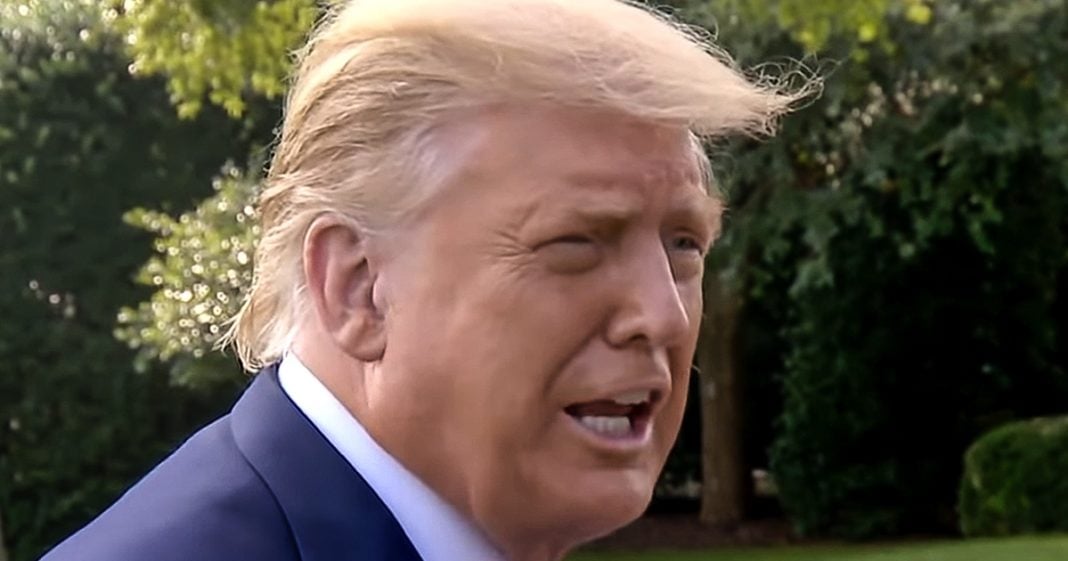 According to a new report, and plenty of eye witness accounts, Donald Trump might actually be the laziest president in modern history. According to the report, Trump rarely shows up for work, and often just spends the entire day inside the residence portion of the White House, ignoring everyone that isn’t speaking to him from his television. Ring of Fire’s Farron Cousins explains what this means.

According to a white house correspondent for Playboy magazine and a new piece that he actually wrote for the bulwark, which is a right wing online publication, Donald Trump’s incompetence. Yeah. That’s something we should be concerned about, but what we should be more concerned about is the fact that the dude never shows up to work. And that’s a really interesting claim. And Brian grim, the reporter has actually witnessed this obviously firsthand. He has a white house correspondent. He is there frequently. He knows based on what he seems was sees with his own eyes and being able to extrapolate other data that Donald Trump never works, which is ironic. Considering the fact that he literally, every day, he gets to work from home. He works in the white house and he lives in the white house. You know, this whole, the thing with the pandemic, where a lot of us have been having to work from home, he’s been doing it since he took the job.

Like, all you gotta do is walk from the residence of Hawaii house two to the West wing, and then you’re at work. I mean, it’s not, not that far of a commute, but apparently that’s a little too much for Donald Trump to be able to handle according to this new report. Uh, and here’s the piece of evidence that, uh, Kareem offers. He says, whenever the president is in the West wing, there is a Marine posted outside on guard. Always if that Marine is there, the president is there. If the Marine is not there, the president is not there. He is over in the residence. It’s that simple. It really, and truly is. But then he points to other evidence that is a little more consequential. And this is the evidence that is driving Donald Trump’s staff insane. And that is the fact that did we see staffers constantly coming out, making these bold proclamations, making these statements, saying these things to the press during interviews, and then having to come back later on and say, no, no, no.

I, I either didn’t say that at all. You’re lying about what I said. And then they get confronted with the clips and they still somehow try to spin it, or they say, well, I didn’t understand the question. And the reason they do that is because they have, I hadn’t seen Donald Trump. They hadn’t gotten his approval to say what they were going to say. So they go out there. They say the thing, and we have seen this Corrinne points out, uh, several times with white house, uh, press secretary, Kaylee, McInerney, she’ll come out and say something and say, Oh yeah, Donald Trump said, blah, blah, blah. Or he knows that this is happening. And Trump later says, I don’t know what’s going on. I’ve never talked to that person. And then McEnany comes back later and says, Oh yeah. Um, I misunderstood the question. I didn’t, I didn’t realize what you were asking.

So, so I didn’t lie. I just didn’t understand it yet. You know, it’s really folks. Um, we had a hurricane here last week in Florida, so I was without electricity for a couple of days. So I did what I actually liked to do every couple of years. I re-read both animal farm and 1984. And what Kareem is describing in this piece about the, uh, staffers publicly saying one thing, then Trump behind the scenes saying, wait, Whoa, Hey, wait, you should have talked to me about this. I’ve been sleeping over here in my lazy boy. So the staffer then has to come out and say, Oh no, comrade. I never said this. What I actually said was Blah there’s legitimately what? Those two, The bookstore about that’s what George Orwell was, was satirizing. And yet here we have it actually happening much in the same way that it happened at both animal farm in 1984 in the white house.

But this also undercuts Donald Trump’s claims that he works harder than anybody else. The people who work in the white house know how lazy he is, not just the staffers, but the people who have to go to the white house to actually do their jobs. Like these reporters, like Brian crim, they see that the president is missing in action and they see the chaos that it causes in the white house. As a result of this, Trump doesn’t have far to go to be from home to work. There is absolutely no excuse for this man to not go over there and actually do something. But another point to make is the fact that he’s not in the West wing. He’s not talking to the experts. He’s not talking to people with actual intelligence. And I mean, intelligence reports not, not up here, intelligence, he’s not talking to them. He’s not listening to them about what’s happening in the world.

Instead, he’s chilling on his quote executive time in the residency of the white house, getting advice from Fox news hosts. And that is absolutely terrifying. One of today’s video sponsors is surf shark VPN. And right now they have an exclusive offer for a ring of fire viewers, just go to surf shark.deals/ring of fire. And you can get 83% off of a two year subscription to surf shark VPN plus three months free. This makes your monthly membership only $2 and 21 cents, which is a phenomenal price for online security. Right now, the internet has not been as insecure as it is. Today is any other point in its history. And it’s only getting more on secure. So you have to do whatever you need to, to protect yourself and using a VPN is absolutely one of the best and most effective ways you can do that. And surf shark has phenomenal features.

You could use it on unlimited devices. You can white list, certain websites that you use on a regular basis. Like your banking website that don’t allow for VPN use. You can use it to go through multiple different countries so you can serve securely and access information that otherwise might be out of reach for you. So again, go to surf shark.deals/ring of fire. You can enter code ring of fire at checkout, or just click the link in the top of the video description below to get 83% off a two year deal, plus three months free of surf shark, VPN.