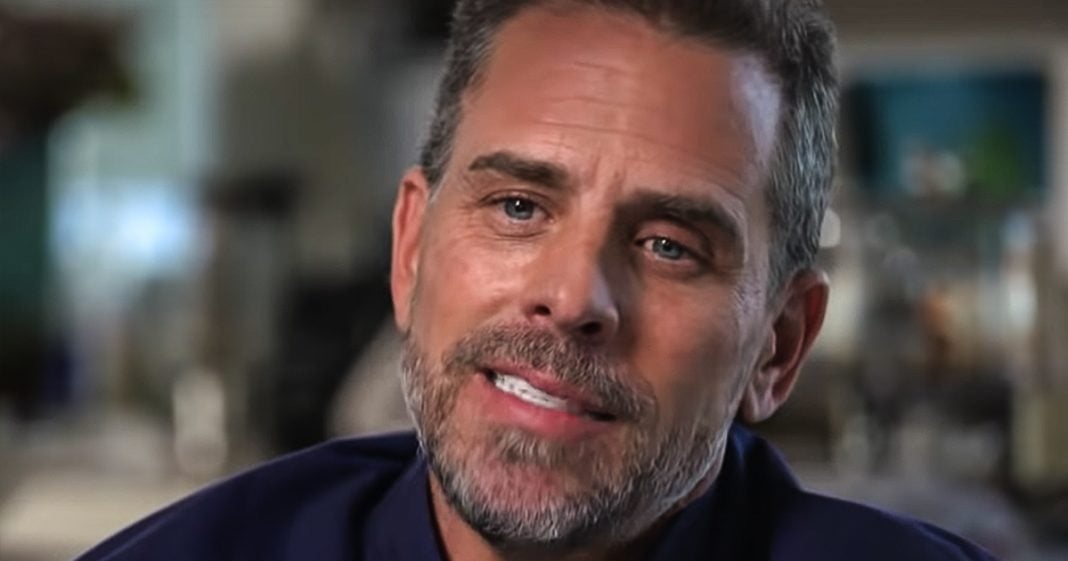 Republican Senators have released their long-awaited report about the “actions” of Hunter Biden going to work in Ukraine, and they found… nothing. After insisting for months that Hunter Biden’s position with Burisma was somehow illegal, these same Republicans couldn’t find a single piece of evidence indicating that there was anything illegal about this. Ring of Fire’s Farron Cousins explains the report, and why it still could end up helping Republicans if the media plays along.

This morning, Senate Republicans finally released their long awaited report on what exactly Hunter Biden did in Ukraine for all those years. And of course, whether or not this significantly impacted us policy in Ukraine, but most importantly, they were trying to find out what kind of illegal stuff Hunter Biden was up to over there in Ukraine. And it turns out that after months of investigations, uh, the answer is nothing, a Hunter Biden. Wasn’t, wasn’t up to anything wasn’t doing anything illegal. Um, just working at a company that share, maybe he didn’t have any business work and for maybe he had no experience, uh, in that field before getting that job. But Hey, Trump had no experience in politics before becoming the president of the United States. So I would think Republicans would be able to let that one go a little bit, right. And after all that’s not illegal anyway.

So that’s that. And I guess it’s over, right? Well, no, even though their report showed absolutely no wrongdoing on behalf of Hunter Biden and Joe Biden or anyone else in the Trump administration, they warranted a worded, excuse me, worded it in a way that actually leaves the door open for Republicans to spin it as if something bad had happened. Let me read you two paragraphs. These are back to back paragraphs in the Washington post. Um, that basically explain what happened. The GOP report concludes that Hunter Biden’s position on barista’s board was problematic and did interfere in the efficient execution of policy with respect to Ukraine, while charging that he and other Biden relatives cashed in on Joe Biden’s vice presidency. So that paragraph, and there’s one more after that, I got to read, but that paragraph is absolutely what Republicans are going to jump on.

Um, because that’s, it was all directly quoted from the report. And that is going to be in the headlines. If they’re not already writing them, eventually at some point today, you’re going to see headlines that say a report shows Hunter Biden cashed in on Joe Biden’s vice P. That’s what it’s going to say. You’re going to see some kind of variation of that throughout right wing media today. It’s going to be hilarious and it’s going to be completely nonsensical when you read the next paragraph a paragraph, excuse me, I don’t know what’s wrong with me today, next paragraph. But at the same time, the report States that quote, the extent to which Hunter Biden’s role on barista’s board effected us. Polity tore a policy towards Ukraine is not clear, which means they found nothing, but of course they can’t straight up. Just say we found nothing.

We found no evidence of criminal wrongdoing. They have to say, I wasn’t clear one clear if he did this, it wasn’t clear if he did that. No, it is clear. It is crystal effing clear. I don’t care if you like Joe Biden or Hunter Biden or hate them, or you have no strong opinion of them whatsoever. Hunter Biden didn’t break the fricking law. In this particular instance, Joe Biden didn’t break the law. In this particular instance, they didn’t do anything wrong because if they had the Republicans would be jumping on it, just like they’re trying to say, Oh, they cashed in on his vice presidency by getting a job, a job that paid him well more than whether it should have paid him. Sure.

But even then, by your own admission, through this report, it didn’t impact anything. It didn’t by Ukraine, extra influence in the United States. It didn’t grant Ukraine, any additional boon from the United States. It got them nothing. It got Hunter Biden, a lot of money. Joe Biden got nothing out of it. It’s just a dude who got a job. He may or may not have been qualified for getting overpaid happens every frigging day here in the United States. Right? I think Trump’s kids are the poster children of people having jobs that they’re not qualified for getting paid way too much. Right. But y’all want to go after Hunter Biden for doing the same thing for like two years where the Trump kids have been doing it for a lifetime Hunter Biden didn’t do anything wrong. Republican’s dug and dug and dug. They sent Rudy Giuliani over there. They sent him with his two pals who are now going to prison and they couldn’t find anything, but they’re going to spin it based on that one paragraph as if they had.