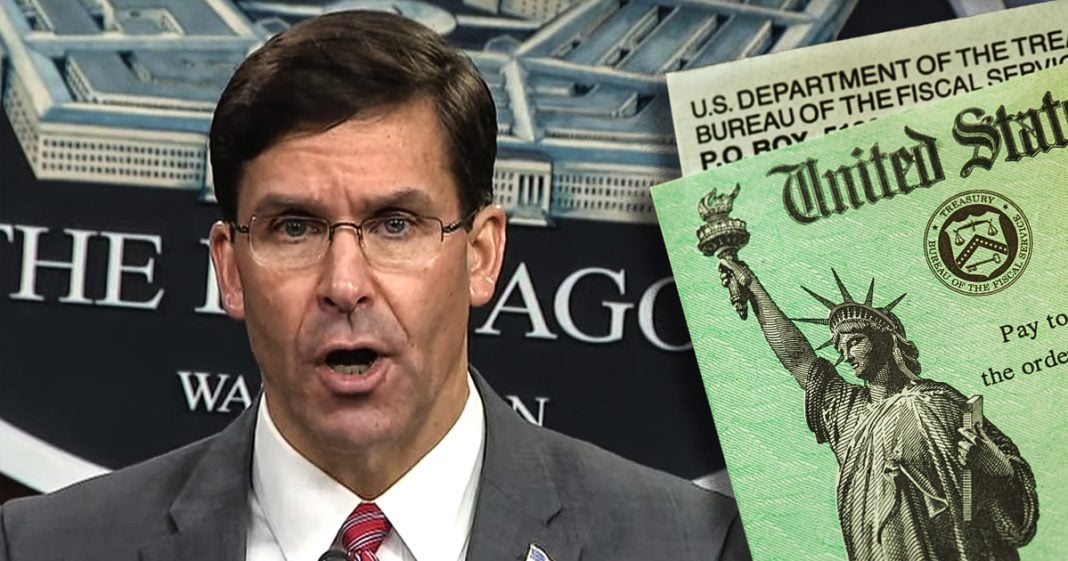 The Pentagon had money that was specifically for helping with the pandemic, but instead they did what they do best and decided to spend it on more weapons and tools for war. The military industrial complex has become so strong that even in the middle of a pandemic they would rather enrich defense contractors than actually help American citizens survive. Ring of Fire’s Farron Cousins discusses this.

A new report yesterday revealed that the Pentagon took their $1 billion that had been earmarked for coronavirus response relief, whatever it was, it was from the, uh, cares package that was passed. So all of it was supposed to pay for, uh, responding to COVID-19. Uh, they took that money and instead had their lawyers look for loopholes in the carers act package, and their lawyers ended up determining, you know what? You can spend this money on your endless Wars, go buy some new toys, go buy some new guns and tanks and missiles and whatever you can afford with your $1 billion in play money on top of your more than $700 billion per year, regular Budget. Okay.

And that is exactly what they did. They spent hundreds of millions out of their 1 billion. So nearly all of it giving that money to 30 different defense contractors for various items since the package was passed in April. So money that was meant to respond to the pandemic pandemic that as of yesterday has killed 200,000 American citizens. And the Pentagon said, yeah, well, we could buy some new toys with This Military industrial complex here in the United States. The one that Eisenhower warned us about as become so ingrained that even the Pentagon itself, of course, because it’s run by a former Raytheon lobbyists, Mark Esper, but they looked at what was happening. They looked at the death, they looked at the economic destruction happening in this country and they said, Wouldn’t say I’m new missiles be pretty badass right now.

Like when did you guys love to have that? I mean, I know this money is supposed to be to help, but come on, when you look at those loses missile, it was pretty good. That’s what happened, folks. They put the livelihoods of their contractors first, and I don’t even think it’s as much that as it is, they want to buy more weapons of war. That’s what they love. That’s what they do. That’s who they are because the more money they spend there, the more money these lobbyists are going to give to their favorite politicians. Those favored politicians are going to keep the same jackasses running the Pentagon and so on and so forth. The ride continues. Everybody moves along swiftly. It’s just the American public that suffers from this economically and physically again, with 200,000 Americans dying as of yesterday, first and foremost, the Pentagon shouldn’t have gotten a single dollar out of the carousel.

I see. It’s not really surprising that they did because that’s, um, officials do Democrats and Republicans, by the way, they always want to make sure that, Oh, is a Pentagon need a little money. You know, it’s like your grandmother, uh, you go over there. And even though you already got a pocket full of cash, your grandmother’s going to slip you a 20 million. Don’t you tell anybody about this? That that’s what, that’s what our elected officials are with the Pentagon. The Pentagon is the fat spoiled brat with money gushing out of their pockets. And here comes grandma of the house or Senate to say, here, I’m going to give you a little extra 10 here. They don’t need it. They’re not going to do anything responsible with it. They’re not going to help anybody with it. You’re just feeding the problem.

That is what the Pentagon is. And that is what they did with their COVID money. It is not surprising, but it is still nonetheless infuriating. The Pentagon should have their budget cut at least in half. And I don’t even think in half as good enough, they should be getting a quarter of what they currently receive. We’d still have the largest military in the world. We’d still spend more than almost anybody else on the planet. We’d still be just as safe as we are today. And I think that’s the thing that Americans really need to wrap their frigging heads around. Stop thinking that just because we spend more we’re any more safe. We’re good on the safety issue, we’ll be good on the safety issue. If we cut the Pentagon budget by half, we’ll be good on the safety issue. If we cut it to 25% of what it currently is, but it’ll never happen because everyone in DC with the exception of maybe a handful, they will continue to feed that beast until it gets so large that it eventually collapses on itself. Almost like a dying star.