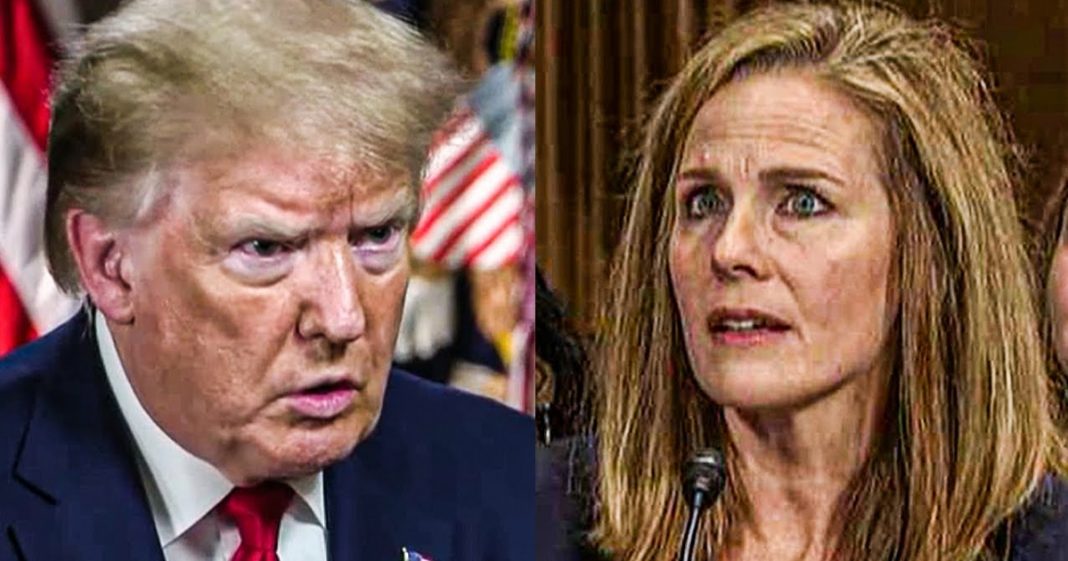 At the very top of Donald Trump’s Supreme Court list is a woman by the name of Amy Coney Barrett, a current circuit court judge who, prior to her appointment to the circuit court by Trump, had never been a judge in her life. And now she’s sitting in a position to receive a lifetime appointment to the Supreme Court, where she will undoubtedly attempt to fulfill her “duty” of creating a “Kingdom of God” by imposing her religious will from the bench. Ring of Fire’s Farron Cousins discusses this.

While it’s still unclear who exactly Donald Trump is going to nominate to fill the vacancy left by the passing of Supreme court justice, Ruth Bader Ginsburg. The name at the top of his list. The one that the rumors are now swirling about being the nominee or the eventual nominee is a us district judge that Trump appointed a couple of years ago by the name of Amy Coney Barrett. If that name sounds familiar, it’s because you may remember her confirmation hearings. Cause she was one of the people that Trump nominated, who had never been a judge before in her life. She did go to law school. She was officially a lawyer. She did clerk for Antonin Scalia. She says she is of the same mold as Scalia. Um, but she’d never been a judge before receiving a lifetime appointment to be a U S district judge. Oh, she also happens to be a Catholic fundamentalist by the way, who is on record as saying quote, a legal career is, but a means to an end. And that end is building the kingdom of God. So according to her own statement in the past, she’s supposed to use her legal career to create a kingdom of God. And this is likely according to all the reports coming out right now, likely to be the woman who ends up replacing Ruth Bader Ginsburg on the Supreme court. Uh, Amy Coney Barrett judge Coney Barrett is, uh, in her forties. So it is conceivable that she could spend 30 to 40 years assuming good health on the United States Supreme court.

That would mean that my children would likely have grandchildren by the time she retires. If she serves a full career as as most Supreme court justice do, because that’s what Trump does. That is one thing he has done better than really anybody else. Not only by the way, putting unqualified people like judge Coney Barrett on the courts, not just Supreme court courts all over the country, but picking them younger. There are judges younger than me. I’m a millennial. There are judges younger than me serving on federal benches in this country for the rest of their lives that are going to be there for 50 years, unless they decide they want to retire early. That’s crazy, but he knows what he’s doing and he’s doing it in a way that no other president’s been able to cause Mitch McConnell has helped him every step of the way.

So if it is judge Amy Coney Barrett with her Catholic fundamentalism, but also being a woman I’m afraid, I’m afraid she’ll get, she’ll get confirmed. She’ll get confirmed immediately because as I mentioned, and this was a problem that Democrats ran into back when she was nominated for the district court back in 2018, I think it was, she’s never served as a judge before. So she doesn’t have a record to really dig into and find out what she believes. It’s kind of still a mystery. So we can’t say, Hey, we can’t vote for you because of X, Y, or Z. So the Democrats lose that this as, as horrible as she would be on the Supreme court. And she has said, you know, that she believes in precedent, but she’s also said other times the Roe versus Wade should be overturned. So this would be horrible for women would be horrible, really.

Um, on all social issues, she’d be horrible on all corporate issues. She would be horrible all around. Like nobody wins with this, unless you remember the top 1% that wants to go out and pollute something or Rob someone like, then, then you’re covered under a Coney Barrett, but it’s a smart pick on Trump’s part. Like not because she’s good. Again, horrible would be one of the worst up there, by the way. But in terms of what Trump is doing, whoever advised him on this, pick a, I gotta hand it to you. This one is kind of hard to build a solid case against with the general public cause that’s the thing we always have to remember. Folks, the general public are not the people that are watching this, that, that tune into ring of fire every day or that watched David Pakman or Sam Cedar or Kyle Kalinsky know the average person doesn’t do that. The average person doesn’t even tune into Fox news or MSNBC or any of that. They watch their local news and that’s it. That’s all they get. That’s all they see. Their local news is going to devote two minutes to whoever it is. Donald Trump nominates. They’re not going to tune into CSPAN. They’re not going to watch the hearings there. They might read a little bit in the local news. Maybe they have the New York times. Maybe they have watched him post. Maybe they have Washington times who knows,

But the majority of the people in this country are not avid political news consumers. They’re just not. So they’re not going to know that this woman is a religious fundamentalist that is going to bring her religion with her to the bench. And it’s fine to have religion, not fine to bring it to the bench. It does not belong there, whether she’s on the Supreme court or just on the district court where she serves. Because again, she is on record as saying that the, the, the purpose of her law career is to build a kingdom of God, FYI. Uh, I am also, I was raised Catholic. I no longer consider myself religious at all or adhering to any religion, uh, was raised Catholic, went to Catholic school for quite a while. Um, there is a kingdom of God already built that’s heaven, according to Catholic teaching.

So I don’t know what she’s saying, building a kingdom of God, because according to her own religion, cause I know it, it only exists in the kingdom of heaven. So I don’t know what branch of Catholicism she’s following, but let me tell ya. It’s not, not the one that average Catholics go and hear about every Sunday. Nevertheless, this isn’t what we need on the bench. It’s not even close to what we need. It’s not even something that actually should be allowed on the bench. We need people with actual experience. We need somebody with a record we can scrutinize, but lacking that only being able to go off statements she has made publicly or two years worth of district court rulings that may or may not in that two year span have had anything significant.

It’s going to be hard to build a case against her. And that is the brilliance that whoever again, told Trump to nominate this person, and we don’t know if this is the person or not, but it was smart. It was smart. It’s hard to defeat somebody when your job is to present dirt against them when they don’t have a history upon which to have dirt. Cause at that point you have to start attacking the character and that doesn’t go well. I mean, look at all the character stuff we had against Brett Kavanaugh. And even that didn’t work

Komi, Barrett’s already gone through one confirmation. If there existed something horrible about her, that would keep her off the bench. Uh, we’d already know about it. I’m afraid that if Trump nominates her, that’s a slam dunk for him. And that is a loss of that seat held by such a good person, not just a good lawyer or a good judge, good human being. And I didn’t agree with her on everything. Trust me, the Kaepernick stuff. That’s ridiculous, but she was a good person. And she’s going to be replaced with this fundamentalist who doesn’t have the experience. Doesn’t have the knowledge to be sitting in that same seat, but that is likely what is going to happen. And the worst part is if it’s not judge Barrett, it’s probably going to somehow be somebody even worse, but she checks the boxes, right? It’s a woman she’s got the religious fundamentalism is on record saying Roe versus Wade needs to be overturned. It’s everything that conservatives want. So don’t be surprised if she’s the pic.