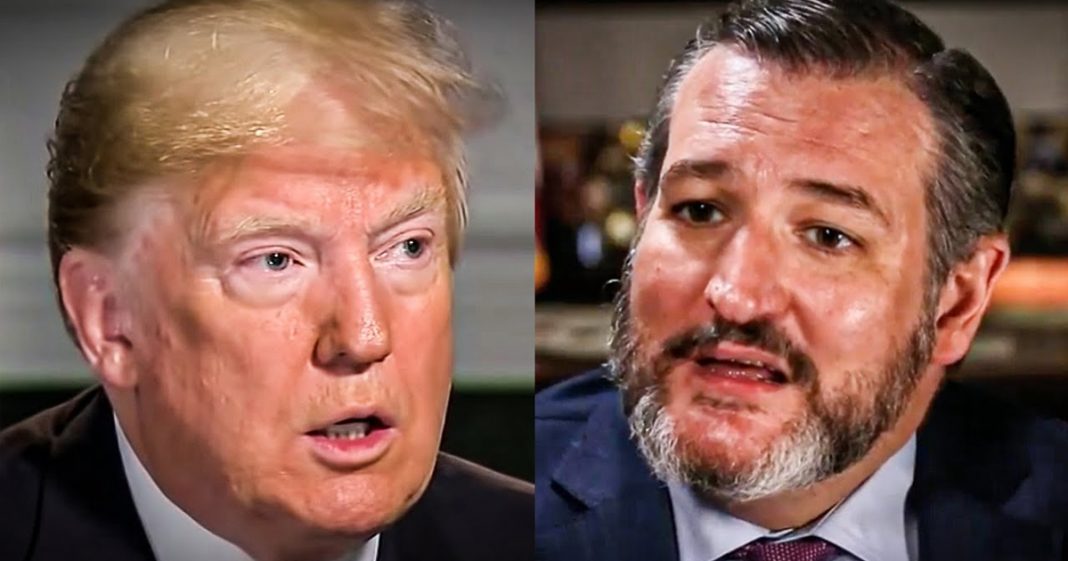 He may not be Trump’s first pick for the vacant Supreme Court seat, but Donald is still confident that, if the need arose, he could trick Democrats into putting Ted Cruz on the Supreme Court. The logic behind his argument actually isn’t that bad, and this one of the few times that he has ever exhibited anything close to political savvy. Ring of Fire’s Farron Cousins explains Trump’s plan, and why it would likely fail hard.

On Friday, even before Donald Trump had learned of the passing of Supreme court justice, Ruth Bader Ginsburg, he was giving a speech in Minnesota where he talked about the kind of person that he would like to put on the Supreme court. And as we all know, from the recent list, he put out people like Ted Cruz were on the list. And as Trump explained to the audience, he actually had a fairly smart reason for putting Ted Cruz on the shortlist for people to nominate for a Supreme court vacancy. And I will let him tell it in his own jumbled, garbled, incoherent words. So, okay. All of the gobbledygook, uh, aside, you know, all of the, Oh, that could be the most conservative. Oh, they’re gonna be one of [inaudible] Dan. His tone changed his voice itself changed multiple times during that, uh, like he was in various stages of puberty throughout his little speech there.

But the, the Ted Cruz thing, that’s not an idiotic idea to be perfectly honest. Uh, I know I’ve given him a hard time throughout his entire presidency of never doing anything. You know, political really it’s all been business, but that’s actually a fairly smart thing to do. You know, Democrats hate Ted Cruz. They want them out of the Senate. They got four years before they ever even have a chance to do that again. So what if, what if a seat that almost went to a Democrat suddenly opens up again, suddenly you’re looking at a different situation. Suddenly Democrats think, okay, you know what? We hate working with Ted Cruz. We get him out of here. We don’t have to do that anymore. Yeah. We lose the Supreme court seat, but we gain a Senate seat.

Maybe, maybe his word may is doable. And of course the Republicans in the Senate, as Trump pointed out would absolutely a hundred percent vote to put Ted Cruz up there. He’s a conservative, they know they’ll control them. They know how to vote. They’re good with it. Plus Trump didn’t mention this, uh, Republicans hate Ted Cruz too. Ted Cruz was a lawyer for the George W. Bush campaign. Uh, during the whole Bush V Gore thing, emails were later revealed or leaked, I guess would be the proper word. Emails were leaked showing that the reason Ted Cruz didn’t end up with a job in the Bush administration, even though he was qualified for it, qualified in quotation marks, um, was cause they all hated him so much. Nobody could stand to work with him. He was obnoxious. He was annoying. He was shrill. They just, God, no thank you, Ted.

So Republicans hate him too. Democrats hate. That’s like one of the few bipartisan agreements in the United States today is everybody hates Ted Cruz. So to get them out of the Senate, to put them in an area where you don’t ever have to actually work with him again, politically speaking, that is smart. Uh, now in terms of judicially speaking, that’s absolutely terrifying. Ted Cruz is not the kind of person we want on the Supreme court. Neither is a district judge, Amy comi Barrett, who Donald Trump is most likely going to nominate for this seat. All of his picks have been God awful because that’s what conservatives produce in the judiciary. God awful judges. But as I’ve said before, shaming McConnell, isn’t going to work. Democrats have forfeited any kind of procedural hurdles to throw up, to prevent Trump from doing anything that seed is going to go to a conservative, it’s going, gonna go to a horrible conservative and Democrats. Once they regain power, have to figure out a way to negate that. But for the time being, we can all rest easy. Cause it’s pretty unlikely that Ted Cruz is going to be going to the Supreme court.