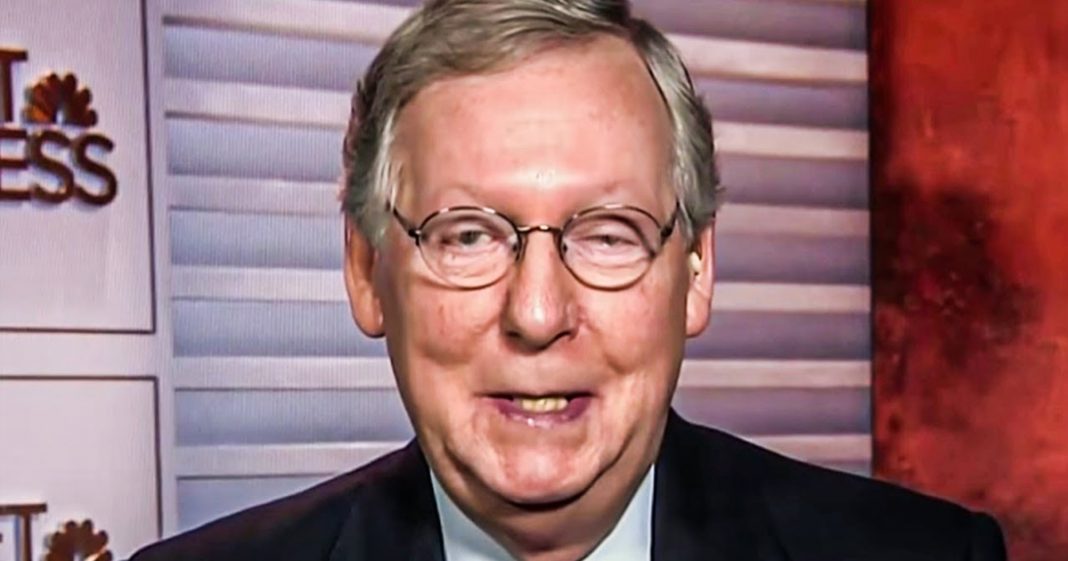 Senate Majority Leader Mitch McConnell was never going to follow his own precedent with regard to the Supreme Court vacancy created by the passing of Justice Ruth Bader Ginsburg, that much has always been obvious. But just because his hypocrisy was predictable does not mean that it will be without consequence. He doesn’t have to worry about his seat, but there are other, weaker Republicans who could lose their jobs because of this, as Ring of Fire’s Farron Cousins explains.

Mitch McConnell is hell bent on making sure that the, uh, Supreme court vacancy created by the passing of Ruth Bader Ginsburg, that that seat goes to a conservative justice. And because he controls the Senate, that’s probably going to happen. That’s a reality that the rest of us have to come to grips with. Uh, we do not have enough backbone in the democratic leadership in the house or the Senate to engage in any of the procedural hurdles that they could, that could delay or somehow prevent McConnell from doing this. They’ve just, they’ve said, they’re not going to do it. So it is what it is. We have to come to terms with it and we’ll deal with that as it comes. But who else has to come to terms with it? Mitch McConnell himself, because here is what we know so far. There are several Republicans, some of whom were actually up for reelection this year, who it’s not sitting too well with their constituents, that they may or might seem a little wishy washy on whether or not they’re going to support whoever it is.

Trump nominates to fill this vacant Supreme court seat polls. Right now show 62% of voters want the next president to decide who gets to sit there. The winner in November gets to decide if it’s Trump great, nominate somebody the very day. But if it’s Biden, we’re going to wait until after the inauguration, then do it. That’s what the public wants. Mitch McConnell will never let that happen. That seat will be filled, uh, months before we get to the inauguration. Unfortunately, folks, that’s the way it is. But McConnell is the one who is likely going to pay the price for it. And here’s why Mitch McConnell knows that there is nothing he can do. That’s gonna make him lose his seat to Amy McGrath. And I know that Amy McGrath has raised, raised a ton of money, uh, since the passing of justice Ginsburg. But it’s not because she did anything. It’s because people from out of state want Mitch McConnell gone. Fantastic. Same thing we saw with Beto, O’Rourke running against Ted Cruz. It’s great. It doesn’t work and it’s not going to work because McConnell, as of right now has a double digit lead against that pro Trump Democrat, Amy McGrath. She has no chance in hell of beating him.

So here we are, McConnell knows that. So he knows he is safe. He also understands that if he loses the Senate because of this, which is likely to happen, then he only loses it for two years. Let’s remember folks every two years, we have Senate elections. Now not all the Senate is up at once, but the next go round. There’s more Democrats up than there are Republicans. This year. There’s more Republicans than there are Democrats. So worst case scenario for Mitch McConnell is that he loses control of the Senate for two years. That’s it. Then during those two years, especially if Joe Biden wins the white house, he knows statistically speaking, historically speaking, he’s going to win the Senate back and he’ll be right back in charge and he’ll have another four years left on his term. He has nothing to lose. So Mitch McConnell right now is playing this strategically.

He understands that he can sacrifice people like Susan Collins in Maine. You’re gone. It’s okay. Mick Sally out in Arizona, bye-bye, you’re not coming back and he may lose control of the Senate, but he understands getting that Supreme court seat is worth two years of being a slim minority in the Senate. That’s what he gets out of it. And he’s right. That’s a good trade because you hold that Supreme court seat. If Trump nominates a, a judge comi Barrett, they’re going to have that Supreme court seat for about 40 years based on her age, at least 30. So you get one seat on the Supreme court. You can guarantee for 30 years in exchange for losing a majority in the Senate for maybe two years, it’s a pretty good trade off. So Mitch McConnell was willing to throw all these weak embattled Republicans under the bus, let the public take their anger out on MCON at McConnell on those people like Collins and Sally and McConnell doesn’t have to deal with any repercussions other than not being called majority leader for the next two years, either way seems like he wins. And that is absolutely terrifying.