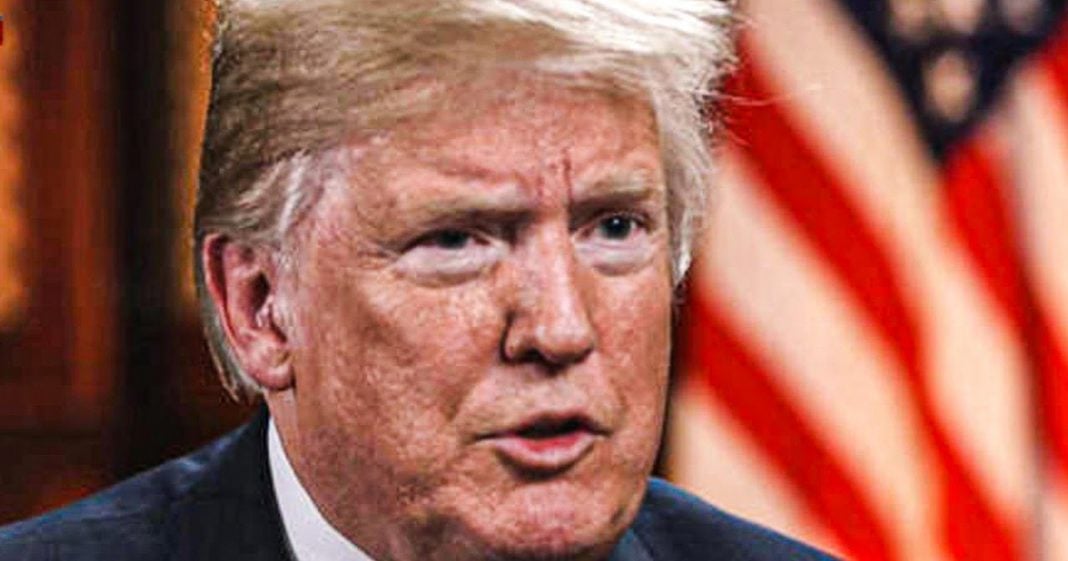 Donald Trump is taking a page out of the playbook of the dictators he admires so much, and he wants to literally rewrite the history of the United States to combat what he calls “liberal brainwashing.” The truth is that American history isn’t pretty, and in order to avoid the mistakes of the past we have to learn how and WHY these things were so bad. Ring of Fire’s Farron Cousins discusses this.

On a Thursday, Donald Trump gave a speech where he talked about the plight of American education, basically laid out what is wrong with education here in the United States. Now he didn’t talk about the fact that for decades, we’ve been underfunding schools in this country. He didn’t talk about the fact that, uh, the textbooks writers essentially have a monopoly on the textbooks. And they’re written by people who are not actually experts in the field. He didn’t talk about the fact that our American teachers are overworked and underpaid. Instead, he talks about that problem that doesn’t actually exist other than in the minds of conservatives. And that is liberal indoctrination. That is what Donald Trump devoted a large portion of his, a little speech on Thursday to discussing what he calls liberal indoctrination specifically with American history. Because according to him, teachers are out there right now, folks, and they’re teaching our kids bad things about the United States. They’re teaching them horrible things about the history of the United States.

They’re making them hate America by teaching them what this country actually did. You know, things like slavery, things like the trail of tears and the stealing of land from native Americans, you know, all the horrible things that are actually a part of our history. It it’s loving her lot. It’s who we are. It’s what this country was built upon. But Trump claims that this is liberal indoctrination designed to get your kids to hate America. Nothing could be further from the truth, by the way, folks, you still learn in school, how awesome and wonderful and how America is just the best. A number one, right? You do. They make you stand up every morning in school from kindergarten, all the way to senior in high school. And every morning you put your hand over your heart and you have to pledge your allegiance to our country.

I thought that was another country doing that, by the way, like if we saw North Koreans having to do that, we would mock and ridicule for them for that. And if we saw, I don’t know, say North Korea, if we saw their leader, tell the schools that you can’t teach kids any bad thing about North Korea, you got to teach them only good things. Uh, wait a minute. They do that. And that is what Donald Trump said in his speech on Thursday that he wants here in the United States, don’t teach in the bad days. Cause the bad things never really happened. Anyway, according to Trump, you know, the 16, 19 project teaching us all about slavery. Yay. It’s so wrong. It’s so wrong. One that bad. I think the slaves would disagree. I think native Americans would disagree, but you know what? Here’s thing, folks. We are not taught these things in school because they want us to hate America. That’s not what it is. We’re taught these things in school because one, we need to know them. But two, we need to know them so that we can learn from the mistakes of the past. And we can say, Oh wow, that was horrible. We’re still cool country. We’re still good.

We got a lot of, got a lot of ground to make up, but that’s also why we learn these things so we can know where we were. So we know not to go back there. So we can look at people who had been oppressed and say, wow, I understand to a degree, you can never fully understand it if you don’t go through it. But I understand your plight. I understand how he’d been horrible to you. And I understand that we need to make up for it, which we still haven’t none. That’s what we need to do. Trump doesn’t want that to happen. He wants American history to literally be rewritten to make it seem like the United States has never been anything less than sunshine and roses. Maybe part of the reason for that is because he knows that history is probably not going to be too kind to him, but maybe he doesn’t care about that considering he won’t be around when history judges him, hell, he’s around now with people judging him and he still doesn’t care. What he’s trying to do is once again, drum up a little bit of support from his base. Cause his base does believe that there’s some kind of liberal indoctrination happening in schools. Uh, both public schools in colleges across the country. But what’s funny is that what they call liberal indoctrination, the rest of the world just refers to that as education. Cause believe it or not folks, facts, figures, statistics, logic, things like that. They don’t really bode well for Republicans.