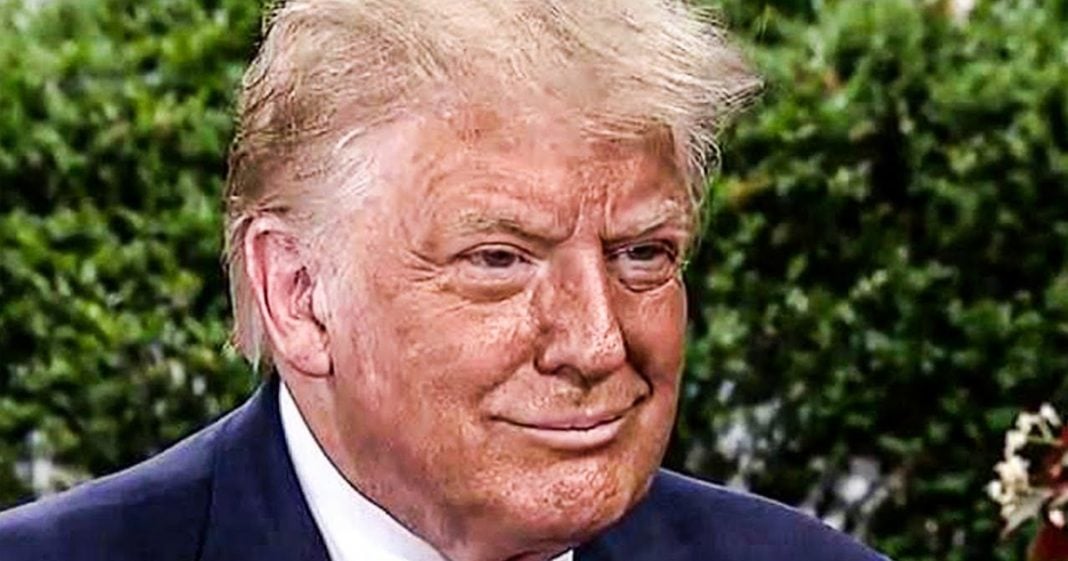 Either Donald Trump doesn’t understand what powers the President actually has, or he genuinely believes that his supporters have the collective IQ of a potato. At his rally in North Carolina over the weekend, Trump said that “we can’t have this guy as president,” referring to Joe Biden, then he said that maybe he’ll do something about that, like signing an executive order. There is nothing Trump can do to sideline a political opponent, as Ring of Fire’s Farron Cousins explains.

At his rally in Fayetteville, North Carolina, this past weekend, Donald Trump said some pretty put it nicely off the wall things. Um, he suggested that Joe Biden was somehow using performance enhancing drugs that he injected into his Botox. Um, because he actually did well in a town hall event that he had earlier this week. And to Republicans who spent months telling us the Joe Biden’s mentally, not all there for him to actually do well in a town hall setting must mean either the guy’s on drugs or he had all the answers ahead of time or questions ahead of time and memorize the answers, which is actually something you couldn’t do. If you were in the severe cognitive decline, they say he is. Um, to be honest, I was actually shocked. Um, watching clips of Biden’s performance of maybe, maybe it’s not, you know, as careless and sloppy as would indicate maybe there isn’t as much mental decline there as we’d previously thought either way Trump’s has his drugs.

Totally, absolutely. A hundred percent taken drugs up the, but somehow I don’t know what performance enhancing drugs have to go into the butt though. I mean, I know obviously that’s where you get like a lot of like steroid shots, but this wasn’t steroids, this was mental. So why in the butt? I don’t know. Maybe that’s where Trump thinks the brain is. Um, but that’s not the weirdest thing that he said about Biden. No, the weirdest and craziest thing that he said about Biden was that he may actually have to sign an executive order, preventing Joe Biden from running for president. Here’s what he said. You can’t have this guy as your president, you can’t have, maybe I’ll sign an executive order. You cannot have him as your president. And as Trump said, this, the crowd went wild applause, thunderous, applause, Rose from the seats. These people support a fascist dictator, which is what Trump wants to be. Folks. He wants to be that.

Yes. And they’re okay with that. Here’s the thing either. Trump is just painfully stupid about what powers the president of the United States actually has, or his followers have the collective IQ of a potato. And he’s trying to exploit that I’m gonna go with the potato supporters. That’s what I think. I think Trump does understand to a degree what he can and cannot do as president. I think his supporters do not. I think they straight up believe that the president of the United States has absolute power to do absolutely anything that they want to do. And that somehow Donald Trump could sign an executive order, preventing Joe from running for president folks, whether or not he can do it, actually doesn’t matter. Cause he can’t do it. We know that, okay. I’m not even going to litigate that part of it. But the fact that these people actually cheered the thought of it like, Oh hell yeah. Make it to where he can’t be president your cheering, the destruction of democracy of our Republic.

I actually had both. But anyway, um, it’s, it’s like that scene from whatever, the one of the star Wars, prequels, who this is how democracy dies with thunderous applause. And that is exactly what happened at that rally. Donald Trump is legitimately up there on the stage, telling people I want to do away with it. I might sign an executive order and we just won’t have a 20, 20 election and people shed. Yes. People said, hell yes. I don’t know what else to say about that. Other than the fact that that’s, you know, crazy cuckoo banana pants, I’m sorry. As the mildest way I can put it, but this is just one of the many, many reasons why this guy has to go. And I wish his followers, these cult members, the maggot Colt. I wish they understood that he’s not doing these things because he loves them. He’s doing it because he knows that they’re easy marks your easy targets. And again, he understands, he believes that you, his most ardent followers have the collective IQ of a potato, not even a good potato, it’s like a potato. You take out of the bag and it’s got a mushy Brown spot on it. That is what Trump’s thinks. Uh, Trump thinks his followers are. And as long as they applaud his ideas of getting rid of democracy, that’s pretty much the best descriptor of them as well.