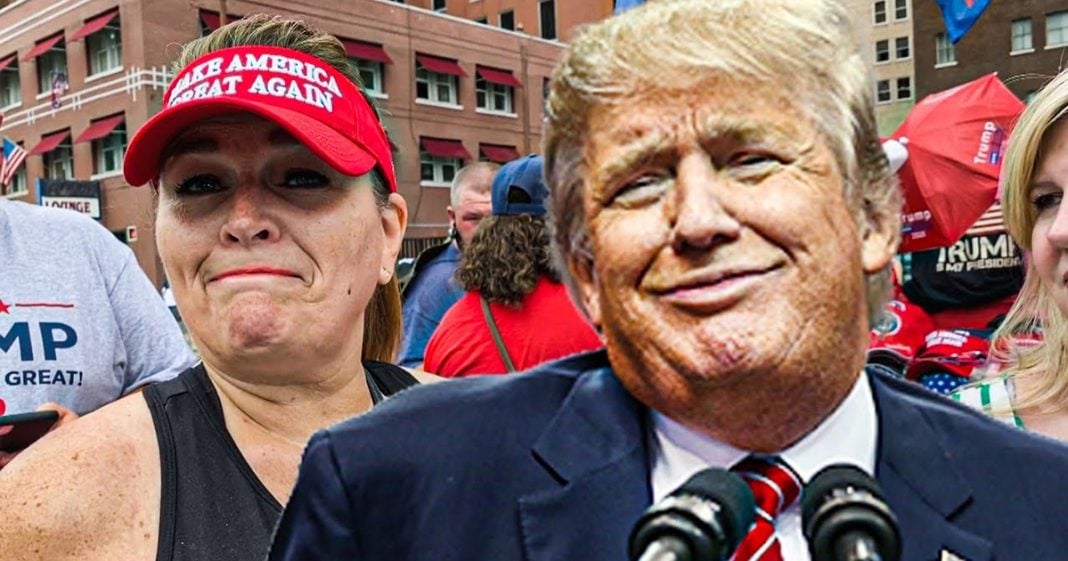 Over the weekend we got a glimpse at the lengths to which Trump supporters will go in order to preserve their leader’s power. Voters in Virginia who attempted to go vote early were greeted by demented Trump supporters carrying signs and banners, and the MAGA crowd actually tried to physically block people from being able to vote, which is against the law. Ring of Fire’s Farron Cousins explains what’s happening.

On Saturday in Fairfax, Virginia, a group of pro Trump supporters showed up at a polling place, which just happened to be by the way, the second day of early voting in the state of Virginia. And this group of Trump supporters showed up to block people from being able to go into this polling place in Virginia, to cast a ballot. In case you’re wondering this is illegal. You cannot forcibly physically block another human being from going into a polling place. But this event, which was considered a pro Trump rally protest, I don’t know. I don’t know what the hell it really was, but a happened for far too long, long enough for plenty of footage of it, to circulate online for everybody to see what was happening. These people were wearing their manga hats. They had their Donald Trump, 20, 20 flags. They were Trump supporters. You can’t try to frame that any other way. And they were breaking the law by blocking people from going in to vote because they are afraid that people voting means Trump’s going to lose. First of all, that’s not normal behavior. That’s not what somebody who’s, who’s firing on all cylinders. That’s not what they do. Okay? These are people that need help.

They need to be deprogrammed. These are cult members. These are cult followers of Donald Trump. It’s not about his politics or his policies. It’s about him personally, because I guarantee you I’ve seen that footage. There’s not a single person in that crowd. Who’s benefited from anything. This man has done. Nobody trust me. These weren’t members of the top 1% who were protecting Trump to keep the tax cut in place. Okay? These are average working class people, and he has done nothing to help any of them. He has not lowered your prescription drug prices. He hasn’t actually cut your taxes. He’s given you a loan from your own money that you have to pay back next year with his payroll tax cut.

He hasn’t protected you from the pandemic, uh, that trade war, you know, Virginia, there’s a lot of farm land. So you’re directly negatively affected by that. So, so I don’t know what you’re obsessed with him for, unless it’s the racism thing. Uh, because aside from that, he’s, he’s given you nothing. He’s given you plenty of dog whistles. So why on earth would you feel the need to break the law to protect this man? Is your racism really? That deeply ingrained in you that you’re willing to do that? Cause if so, I’ll say it again. These people need help, but this is what we’re dealing with. And this is what I’ve been talking about for months and months and months. And these were just people who got together on their own. As far as we know, this was not obviously sanctioned by the RNC. What is sanctioned by the RNC or the thousands of quote, poll Watchers that they’re trying to put together to intimidate people on election day, coming up in November. That’s what they want to do.

This, this, this, this, this is a taste is what we’re seeing right now, a taste. But as I have said before, folks, if you were in line to vote, other than the person at the table who has the ballots, you are under no obligation. You are under no threat of law. If you don’t answer somebody’s question. If they ask you. So if they ask you who you voted for, if they ask you to where you live, if they ask you, are you leaving? We’re only allowed to vote. Are you a resident here? Are you an American? Have you ever been to jail? If they ask you any of those things and they are not the person at the desk, handing out, balancing, checking through the names. If they’re not that person don’t answer the question. If they try to physically block you from getting into vote, walk around them as best you can, you know, walk way, way, way around them. You’ll walk behind the back of the building and then come up to the front of, you have to, to avoid them on the street. I don’t care what you have to do. Do not engage, do not talk, do not answer. Do not fight these people. I it’s tempting God. It’s tempting.

Be stronger willed, go around, do not talk, do not engage. Do not acknowledge. Go in, cast your ballot, get the hell out of there. Get in your car and scream to the heavens. If you have to let that anger and rage out, but do not take it out on those people, because all that’s going to do is give them more fodder. And if you find it physically impossible to get around these people, that’s when you call in law enforcement remain in your vehicle, call law enforcement, tell them what is happening. Hopefully they can come and get these people to disperse, or at least move to a separate location where they’re not blocking the polling place. That is what you need to do. Anything else is only going to give them more ammo, but be prepared because what we saw in Fairfax this weekend, that’s, what’s going to be happening all over the country on election day.