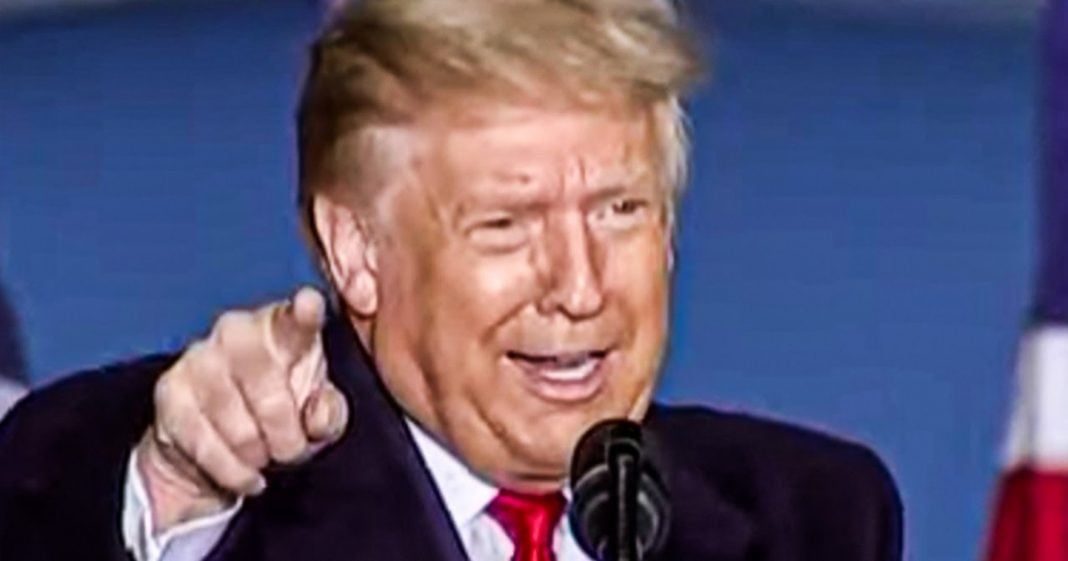 Donald Trump might be trying to downplay the dangers of COVID-19, but his staffers clearly understand that this thing is real and that it poses a significant threat. Reports this week tell us that his campaign staffers are irate with the President for holding an indoor rally last weekend during a pandemic, and unhappy staffers rarely do a good job. Ring of Fire’s Farron Cousins explains what’s happening.

There’s apparently a revolt happening, or at least the many revolt happening behind the scenes with Donald Trump’s campaign over his rally last week in Las Vegas, that was indoors. And during which the president actually encouraged people to not wear face masks. Well, his staff was furious and they’re still furious. Not just because obviously that’s very dangerous and very stupid, but they’re mad because the president is clearly sabotaging his own chances of reelection. According to staffers who spoke this week to the New York times course on the condition of anonymity, um, they’re furious with the president because what they think is going to happen is there’s obviously going to be a surge in cases in Las Vegas, as a result of the rally and other places where these people traveled from. And then once that news comes out, it’s going to hurt the Trump campaign. And here’s the thing we know this is going to happen.

Actually, there was a story that came out yesterday that said that I think 500 employees of just the Wynn hotel right there in Las Vegas, 500 of them just tested positive. So yeah, it’s still pretty big in Las Vegas because Las Vegas, like other red areas of the country said, we gotta reopen. We’re losing money. Money is the most important thing, more important than human lives. And for Trump, it wasn’t about the money. It was about winning the power back. So we went to Las Vegas, he had this indoor rally and people are going to get sick from this. People could very likely die from this and his staffers aren’t necessarily mad that people are going to die. They’re mad that people are going to die and that it’s going to be blamed on Trump because it is his fault. They know it’s his fault.

But the sad thing is y’all knew this would happen. As I’ve said, plenty of times. Like I don’t have sympathy for these people anymore. I ran out of sympathy for them a couple of years ago. Every time this man does something incredibly stupid or dangerous or puts other people’s lives on the line, his staffers old are furious. They’re mad, they’re angry. They’re unhappy. Oh, you see what he does look working for. This man is not going to look good on any resume in the future. I can promise you that you don’t believe me. Why don’t you check in and see how Sean Spicer’s job search is going? Hmm. That one’s not so good. Is it Kellyanne? Conway’s I imagine it’s probably going to be roughly the same. So working for his presidential campaign, especially with as disjointed and horrendous as it has been. Yeah. That’s not going to work well.

So if you’re unhappy, if you’re furious with him, if you don’t like putting other people’s lives in dangerous, quit start looking for another job and then quit. You know, I’m not encouraging anybody to just drop it all and have nothing. No, but you could find something better. You could find something where you don’t have to sacrifice your own soul every single day for Donald Trump, that stuff wears on you. Psychologically people that is going to come back to haunt you. You may be too young to realize it now, but trust me, those mistakes, you make those little things that you let slide. Even though if you weren’t the one making the decision, you are a part of it. Trust me, it’s going to come back. It’s going to come back hard and it’s going to come back in ways that you never even expected. So get out now, get out while you, you still have a piece of your soul left because things are only going to get worse from here on out.

Donald Trump himself has said he doesn’t care about having these indoor rallies with no mass, because he said, quote, I’m up on stage. I’m far away from everybody. So those germs aren’t making their way up to him. They could. So he doesn’t care. He doesn’t care about the people at the rallies. He doesn’t care about you. He only cares about himself and winning that election. And if you’re okay with that fine, stay on the staff. See if that helps you in the future. But if you’re not start making some phone calls, setting up some other interviews and get the hell out of there before it’s too late.