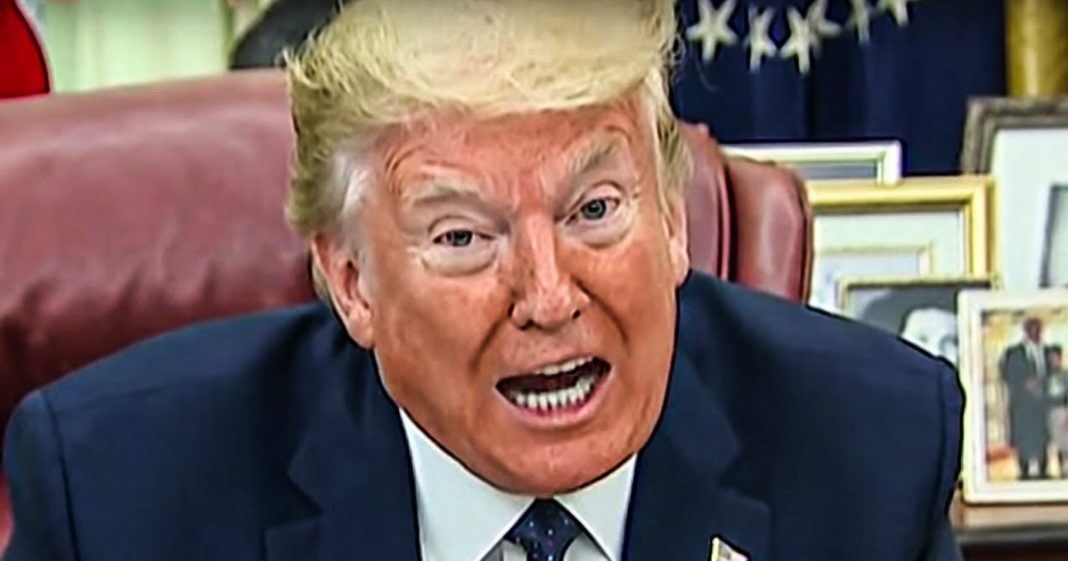 At a rally last weekend, Donald Trump mentioned that he might try to “negotiate” a third term as president because he says that he is “entitled” to it. While the negotiation part is absolutely ridiculous, the part about being entitled says a lot about the state of the President’s psyche. Ring of Fire’s Farron Cousins explains the President’s rantings and what they mean.

This past weekend at his rally in Nevada, Donald Trump, once again, suggested that he might overstay his term in office. Uh, but this time he wasn’t going to do it, you know, just by staying because he doesn’t want to leave. He says, he’s going to try to negotiate a third term. Uh, here’s what Donald Trump said, uh, specifically word for word here at 52 days from now, we’re going to win Nevada and we’re going to win four more years in the white house. And then after that we’ll negotiate, right? Because we’re probably based on the way we retreated. Uh, we’re probably entitled to another four. After that he said is not how it works. You’ve already had four years to be president. And in those four years, in spite of the fact fact that you were under investigation, you’ve still done things. It has literally in no way hindered anything you have wanted to do.

You have appointed over 100 judges who are going to serve a lifetime in federal courts throughout the country. You have appointed two Supreme court justices who are going to continue to bastardize the us constitution for another generation. You have signed executive orders. You have past budgets. You have given the military industrial complex, hundreds of billions of dollars every single year. And in spite of all of that, you still managed to play golf more than any other president in living history or all of history. For that matter, you’ve managed to take more vacation times than anyone else. In four years, you have managed to continue to do rallies, to go out there and campaign since day one of this administration, you didn’t lose any time at all, just because you were under investigation. Hell you just admitted earlier this week you spent nine days or nine, nine hours, excuse me, nine hours in one day, watching Fox news.

You’re not owed anything. And of course we can’t forget the important fact of that’s not how any of this works. There is an amendment to the United States constitution that limits Donald Trump to today terms. That’s it, uh, eight years as president of the United States or 10 years total, if he had taken over for a vice president or as vice president becoming president, yada, yada, whatever it is, he can’t serve more than 10, but because he has now served two full terms, he is not eligible for the 10. He only gets the eight. He cannot serve as vice president because then he would overstay his term limits. He can’t negotiate that that’s an amendment to the constitution. You know what it takes to undo an amendment. Yeah. It pretty much takes the entire country being like, yes. Okay. We’re all going to get off our butts. We’re going to do the constitutional convention thing.

We’re going to come up with an amendment. We’re all gonna ratify it. State by state, by state, by state. Yeah. Not going to happen. Totally not going to happen. If we’re going to do any kind of amendment about term limits, we’re going to stick them on the house and Senate too. Instead of repealing them from the white house. No, we’re going to make sure that we do not have Kings here in the United States. Hell, that was the big fear of the founding fathers. We don’t want to be King makers. They didn’t put term limits in place. And that was probably one of the greatest failures that they had with the exception of not including actual human beings as actual human beings. That’s that’s the biggest one. Obviously term limits. I’d say a second, but here we are. And the reason I talk about these stories is because Democrats seem to freak out about them. Oh my God, what if he doesn’t leave? Oh my God.

He does try to run for a third term folks. I’m gonna keep telling you this, stop freaking out about it. Stop acting like this as a thing he can even do because he can’t. And if he tries there’s mechanisms in place that will make it in real fast. And I’m not talking about after a few days, I’m talking about within a matter of minutes, if Trump tries to stay in the white house, when he is no longer welcome, he will have no authority to stop the actual authorities from coming in and removing him with force. He cannot run for a third term because we have a constitution that protects us from that. Thank God. Okay. We all be on the same page. Now, can we all stop freaking out every time this man says that he wants another four years, he’s just saying it to get a rise out of you. He’s saying it because his base likes that idea. But let me tell you the scary part, that third term that he’s telling us about. It’s not for him. It’s for one of his idiot kids. And that might be even more terrifying than a third term of daddy, Donald.