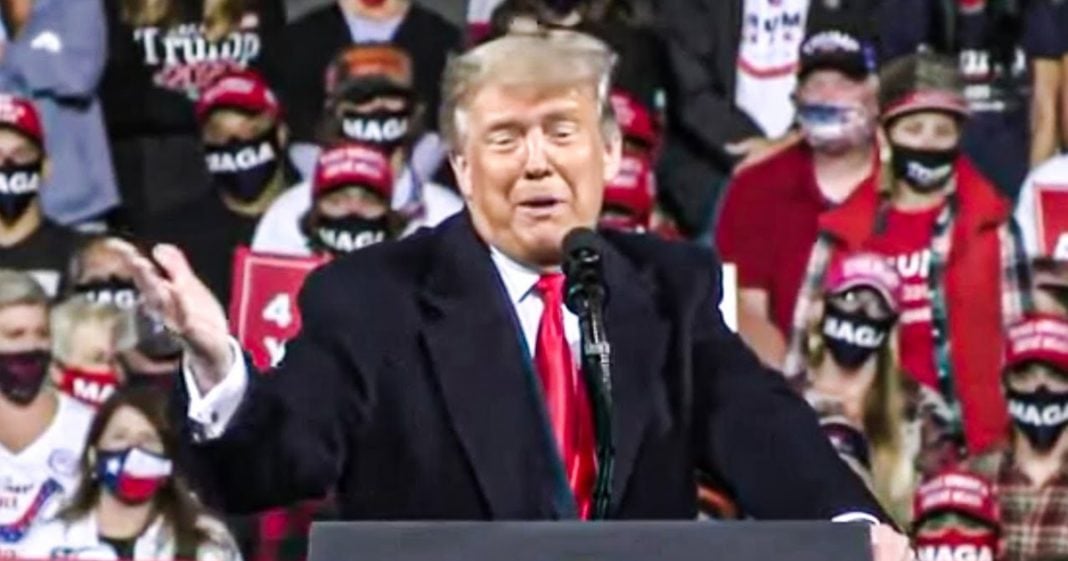 During a campaign rally in North Carolina this weekend, Donald Trump told the crowd that they would never see him again if he loses to Joe Biden in November. These claims of withdrawing from public life are absolutely absurd, as Trump was a spotlight-grabber even before he ever entered politics. He just wanted to scare his base that cares more about personalities than politics, as Ring of Fire’s Farron Cousins explains.

On Saturday, Donald Trump was doing a rally in North Carolina because I guess the cool thing to do is pretend like the pandemic doesn’t actually exist. But during this rally among the many, many insane things that came out of the president’s mouth, he let a little nugget slip that should give hope to every single American out there. And here it is.

Donald Trump:                    He is the worst candidate, the dumbest of all candidates, but he was dumb in prime time, as told to me by a Senator from longer ago, he said, who’s the dumbest in the Senate. Who’s the smartest in the Senate. The smartest is, I won’t tell you, but the dumbest is Joe. I said, who’s Joe? He said, Joe Biden, that was 25 years ago. That was in prime time. He is the worst candidate in the history of presidential politics. If I lose to him, I don’t know what I’m going to do. I will never speak to you again. You’ll never see me again. How do you lose? He is honestly, I go up and these guys are grilling me all the time. Stephanopoulos grill, grill. It’s okay. It’s all right. It’s okay. I think it came out very what’s always, it comes out well, you have to be able to answer.

They’re, they’re very weak compared to some of the foreign people that we deal with from foreign countries, the leaders of foreign countries. But I say he’s always using a teleprompter. I don’t care if he uses a teleprompter. You know what bothers me? That means the fake news is giving him the questions because they’re giving him. So that’s what really, they never gave me the questions. If I ever said, I want, in fact, I’m going to say it now. I want from now on you to give me the questions before you ask me, and I’m going to read the questions off the teleprompter and the, the questions are so easy. Did you see Anderson Cooper? He’s a nice guy. He’s interviewed me over the years a lot, but he’s a tough interviewer. Did you see those softballs? What do you think, uh, Donald Trump is a very bad human being? Do you agree with that? Yes, I do. Anderson. What?

I’ve never seen softballs and actually they’re getting hit by it. They’re getting hit by it. It’s just a terrible thing. I mean, you know, this is a guy I used to call him 1% Joe, because he ran numerous times that he could only get 1%. In fact, he actually had 1% with an arrow pointing left. That means less than. Now he’s shocked. He’s got half of his head left and, and he’s out, think of it. He’s totally shot and he ends up getting the nomination. He couldn’t get it in prime time. What the hell is going on with the world today? What’s going on? What’s going on with the world, Mark Meadow?

Can we get that in writing? Can we get this notarized? Like, could we make sure that that is actually, what’s going to happen? That if he loses, we just straight up, never have to see him again. We never have to hear from him again, like that said no more Trump forever. Cause that’s the, that’s the goal, right? I think that’s what most people in this country actually want is to not see or hear from him again. Uh, you know, maybe kind of be an ex president like George W. Bush, maybe just go live on a farm paint. Some paintings, pretend you didn’t commit all these, uh, war crimes and just never be seen in the public eye again, except maybe show up at a football game. How you can even be friends with Ellen. If you want, just stay the hell away from the public, right? Uh, no, no.

Donald Trump is never going to go away. In fact, if he loses to Joe Biden, he’s going to be more visible than he is right now. I hope everybody understands that this man’s not going anywhere. You know how I know that. Think back before Donald Trump ran for president, what did he do? Had you ever heard of him? You had, do you know why? Because the man loves the spotlight. The man loves the attention. The man loves people. Having their eyeballs on him. He is never going to go away until he is six feet underground. That man is going to do everything he can to be in the public spotlight. He craves it. He thrives off of it. And there’s plenty of people like that in society who until the day they die will do whatever they can to always be the center of attention. And that’s what Trump’s going to do.

If he lives another 20 years, he’s going to be on our TVs for another 20 years. He’ll be on our radios. He’ll be on ads, videos popping up online. There’ll be stories about him. There’ll be documentaries about him. He’ll pop up in movies and quick little cameos like he did before he became president for as long as he is physically able to do it. So I know a lot of people got their hopes up. I know a lot of us would love nothing more than to see this man ride off into the sunset. Like I mentioned, go do a George W. Bush thing, do a George H w Bush thing, do a Ronald Reagan thing. Cause I guess Republicans, when they leave the presidency just tend to disappear. Cause like I can get the hell outta here. So nobody, nobody confronts me about all the horrible things I did while in office.

It’s a Republican thing, I guess, you know, that would be great. It’d be even better. Obviously, if you did a Jimmy Carter instead, you actually went out and helped people every single day. I mean, do people understand that? Like, I don’t know if anybody has any strong feelings one way or another about Jimmy Carter’s presidency, but his post-presidency has absolutely become the stuff of legend. This man devoted his life to helping others after leaving the presidency. So for 40 straight years, this man, and recently you last time he was hospitalized, literally left the hospital. Instead of going home, he went right back to the habitat for humanity site and began building like that’s what all ex president should strive to do. If they want to remain in the public eye, they’re free to do whatever they want. But if you really ever cared about helping others, you wouldn’t be doing whatever the hell everybody else has done.

He’d be pulling a Jimmy Carter. Trump’s not going to pull a Jimmy Carter. Trump’s going to pull a Trump. This is going to be a man that we’re never going to be rid of. I will still probably be sitting here doing stories about Donald Trump five years after he has left office, because he’s going to continuously go on Fox news. He’s going to go on the O H N N network, ABC, CBS, NBC. They’re all going to clamor for interviews with this guy. He’ll do movies, how he may even fund his own conservative network, but I promise you, we will never, never, ever, ever be rid of Trump. And he’ll be far more angrier and bitter and visible if he loses this November to Joe Biden. So don’t believe his little pledge that we’ll never see him again. That’s just fear-mongering to make his little cult-like followers think, Oh my God, I don’t want to lose him forever. We’ve got to save him. No, no matter what happens in November, Trump will always do whatever he can to be the center of attention and every form of media possible.