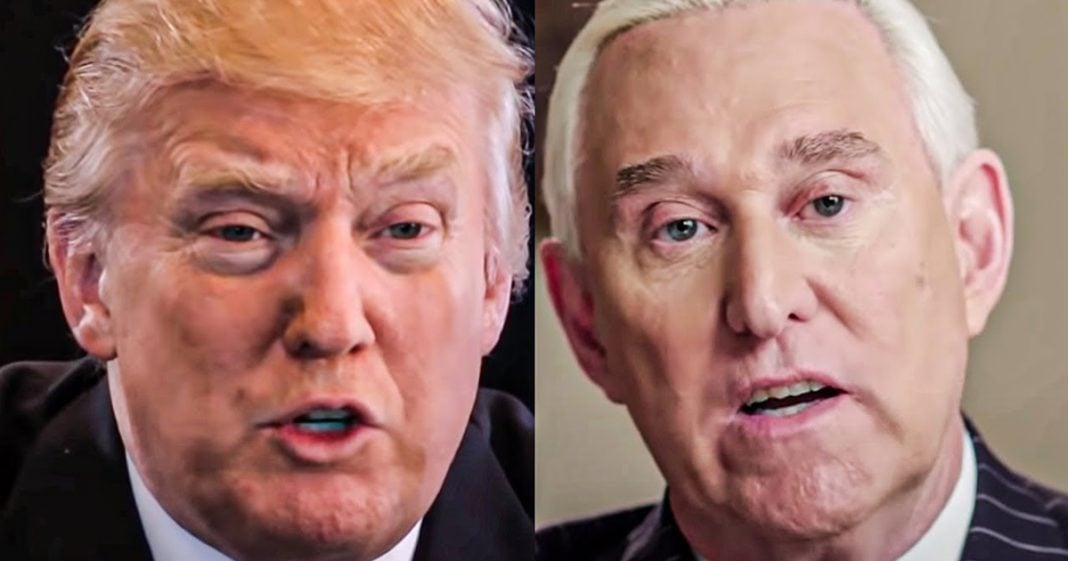 Criminal simpleton Roger Stone has called for Donald Trump to declare martial law in order to stay in power if he loses the November election. There shouldn’t be any doubt in anyone’s minds that Republicans don’t actually care about the rule of law or the United States for that matter. They care about power, and they are desperate to do whatever it takes to retain it. Ring of Fire’s Farron Cousins discusses this.

Donald Trump’s good friend and convicted felon. Roger Stone told Alex Jones last week that Donald Trump needed to declare martial law. If he doesn’t win the election in November so that he can seize power and remain president of the United States. These are totally the words by the way of, of a guy. That’s definitely not in need of mental health, right? Because that’s totally a sane thought to have and such a sane venue to have that, right? No, uh, again, Roger Stone criminal simpleton believes that Donald Trump should declare martial law. If he doesn’t win in November. Now, see, to be honest, this is a scenario I had not yet thought of. Cause as I’ve repeatedly said, uh, all the people worrying about, Oh, what if Trump doesn’t leave the white house? Yay. He has no choice. His term expires at noon on January 20th, 20, 21. Literally nothing he can do, especially because he does not control the military anymore. At that point, nobody has to listen to him ever again.

Actually, if he loses the election, I’m declaring martial law. Okay. Things may get a little, a little different there because what if he decides to suspend the constitution? What if he listens to Roger Stone? Well, to be honest folks, I don’t think you would have many members of the military that would actually go along with that. And that’s what it would take cake to actually overthrow the government that you already control. You would have to have the military on your side. And Trump simply does not have that. So I am not worried about Donald Trump taking Roger Stone’s advice. What I am worried about is people who still think that Republicans actually care about the rule of law at all, or care about America at all.

Roger Stone is not just some fringe character that pops up every now and then to be a villain in American politics. This is a guy that has been deeply embedded in Republican politics for over 40 years. He’s a major player in the Republican party. He’s a trendsetter, not fashionably speaking, but in the party itself, he has cloud. He has sway and he has for decades. And I hope that this dispels any notion that Republicans may have had that they’re the party of law and order or that they’re the party that just deeply loves American Democrats hated no Democrats are not out there calling for martial law Democrats. Aren’t out there saying we’re going to reject the results of the election. And we’re the ones who openly are accepting of the data that says foreign countries are interfering. And we’re not, we’re still not saying we’re going to reject it, but that is what stone said.

Here’s more of what stone said, uh, to safeguard Trump’s position stone called for federal authorities to seize ballots in Nevada for FBI agents to physically block certain voters from casting their ballots and for Trump to use his powers for widespread arrest to solidify his power as according to media matters widespread, like this is fricking this isn’t martial law, by the way, um, Roger, I thought you’d be smarter than that. This, this is actually fascism. Martial law would be with Trump said, Hey, guess what? There’s no, there’s no rules anymore. There’s no law. There’s no law enforcement have at it. Folks. What you’ve described, Roger is fascism. Like this is what we would expect in Russia or North Korea, you know, Iran, maybe that’s, that’s the kind of thing we’re saying. Saudi Arabia. Yeah. That’s, that’s what you’re describing. That’s not martial law. That’s a full blown, fascist dictatorship. But as we all know, Roger, that is definitely what you would like to see happen in the United States.